A review of The Property by Rutu Modan

Shame, greed, and love intertwine on the streets of Warsaw in this graphic novel by Israeli artist Rutu Modan. The novel’s epigraph is a quote from Modan’s mother Michaela: “With family, you don’t have to tell the whole truth and it’s not considered lying.” It certainly sets the tone for this tale of a Polish-born grandmother, Regina, who returns to Warsaw decades after escaping to Israel during War World II. She is accompanied by her granddaughter Mica who is there to support and help her reclaim a property her family lost in the war.

The dramatic elements are many: a romance between strangers, a long-lost love, a jealous daughter, a would-be con artist, and a secretive grandmother. The characters Regina and Mica propel the story forward with their individual adventures, but Modan depicts some interesting moments where the weight of the past collides with a modern yearning to connect. In one instance, Mica gets caught up in a reenactment on the street where men dressed as German soldiers with rifles round up people with badges and load them into the back of cloth-covered trucks. After liberating Mica from the group and apologizing for the mistake, the woman who organizes the tour explains, “The reenactments are part of our newest activities. The regular old exhibitions don’t interest the internet generation. They want to experience the real thing.” 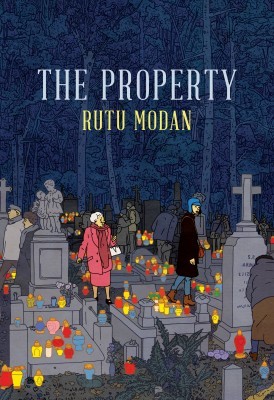 After graduating from Bezalel Academy of Art and Design in Jerusalem in 1992, Modan became a co-editor of the Hebrew edition of MAD magazine and was one of the founders of Actus Tragicus, a group of five Israeli comics artists that published nine books and one special comics album, Dead Herring Comics, between 1995 and 2010. Her debut graphic novel, Exit Wounds, about a son searching for his estranged father after a suicide bomber enters a train station in Tel Aviv (where Modan grew up) won her the 2008 Eisner award for Best New Graphic Novel.

The idea for The Property developed out of a series of illustrated stories Modan wrote for the New York Times website in the visual column, Mixed Emotions, in 2007. The series is a collection of six memoirs about Modan and her family, including her grandmother. It demonstrates the difficult relationship that both she and her mother had with Grandma, largely due to a clash of values, and is echoed in Mica’s relationship with Regina.

Like Regina, Modan’s grandmother grew up in Warsaw and fled to Israel after the German occupation of Poland.

Characters are drawn in a simple manner – solid colours, strong lines, minimal texture – that is often compared to Georges Remi’s (a.k.a. Hergé) ligne claire style, which he pioneered in The Adventures of Tintin. Backgrounds add depth and there are detailed images of street life and cemetery celebrations on All Souls’ Day. The narrative follows a pretty straightforward script that has a lot going on, and yet at times feels like there isn’t enough happening because the story never really peaks. There is no dramatic climax, only the occasional outburst of frustration.

The underlying sense of loss that pervades the story is subtle despite the gravity of these individuals’ experiences. “How many times can you start life all over again?” asks Regina. This resignation to the present is as close as we get to an epiphany. The sentiments of loss resonate the most with the reader, but are muted, which is perhaps why The Property isn’t that gripping. The moments of levity, the mystery, the romance, the secrets, it all rolls along at a pretty quick pace and the characters simply persevere. In that sense it is an everyday story, a story of people just trying to make it through. mRb

Lori Callaghan is an arts critic in Montreal whose work has been published in the Montreal Gazette and The Rover.