Writing Against the Tide

A review of The Rebel Scribe by Christopher Neal

Christopher Neal’s The Rebel Scribe tells the story of Carleton Beals, an intrepid journalist who covered several major international stories during a career that spanned much of the twentieth century. The book’s dry subtitle, Carleton Beals and the Progressive Challenge to U.S. Policy in Latin America, belies an epic tale of adventure, romance, and revolution.

A marginal figure in journalism history, Beals is best known (if at all) for being the only Western reporter to have interviewed Nicaraguan rebel leader Augusto César Sandino in 1928 – an interview which, like many of his endeavours, he undertook at serious personal risk. But as Neal documents, Beals’ career was a remarkable tour of the twentieth century’s global political upheaval. From the Mexican revolution in the 1910s and 20s to the rise of fascism in pre-World War II Italy, all the way to the Cuban revolution in the late 1950s and 60s, with many stops along the way (mostly in Latin America), Beals was a Zelig-like presence with a knack for cultivating insider sources. Writing for publications ranging from august, still-standing institutions like The New York Times, The Nation and The New Republic to various long-shuttered radical journals, he chronicled history as it unfolded. 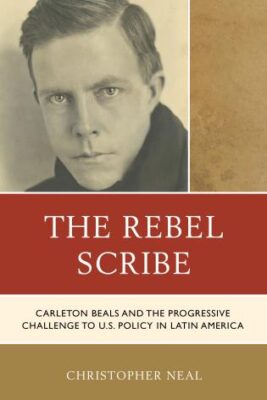 Politically, Beals had a contrarian streak that added further challenges to his career. Unlike many leftist writers during the Soviet era, he stubbornly refused to align himself with either the Stalinist or Trotskyist factions of communism. Anyone can get in an argument with a Trotskyist; Beals was willing to piss off Trotsky himself, in person. Although his anti-imperialist, left-libertarian stance holds up well today, it failed to endear him to socialist factions at the time. Combined with his willingness to attack the powerful in unsparing language, his contrarian nature contributed to his marginal status and his lifelong struggle to make ends meet.

Neal, a former Gazette writer who lived in Latin America for years before returning to Montreal, captures the scope of Beals’ life as well as its key details. At times, the array of politicians, diplomats, revolutionaries, publishers, journalists, and bohemian scenesters in Beals’ orbit, as well as the various rivalries and alliances between them, become hard to follow, especially given the multiple, overlapping global and historical contexts of Beals’ globe-trotting career.

On occasion, Neal’s description of the women in the four-times-married Beals’ life seems oddly sexualized, with repeated references to their physical attributes. To be fair, Neal also describes certain male figures physically, sometimes at length, painting a visual picture of these long-ago colourful characters. But the references to women, particularly Latina women, as “buxom,” “comely” and so on seem to belong more in Beals’ era than in ours.

In a somewhat related vein, especially in light of Beals’ prescient attention to colonialism and Indigenous rights, the book sometimes stumbles in its vocabulary when referring to Indigenous peoples. For instance, on more than one occasion, the same peoples are described as “Indian” and “indigenous” in the same paragraph. This is by no means to fault Neal for not being up to speed with contemporary guidelines in a book twenty years in the works – after all, even Canada’s Truth and Reconciliation Commission report, published only five years ago, uses the term “Aboriginal” rather than the since-standardized “Indigenous.” The terminological missteps in The Rebel Scribe seem like the result less of ignorance, or ideology, than of sloppy editing.

At any rate, contemporary readers should not let these distracting idiosyncrasies get in the way of appreciating a story that weaves one writer’s life with the massive changes of his era. Neal captures a long-gone era of steamship travel and communication by telegram, while reminding us at the same time of what hasn’t changed. Here’s Beals describing the ascendant Mussolini: “He does not flatter his audience but treats it aggressively, at times even abusively,” he reports of a speech to a fascist rally in 1921. “He has absorbed a few philosophic tags […] which he has the knack of expressing in the form of dilute, disconnected, and sweeping generalizations – frequently with a rather poetic originality.” He could be describing any number of savvy demagogues a century later.

Beals’ own story is poignant and inspirational; his work, as documented by Neal, is a sobering reminder of the malevolent forces that have always shaped history, and the bravery and difficulty of standing up to them.mRb