The Strange Scent of Saffron

A review of The Strange Scent of Saffron by Miléna Babin

In the latter half of Miléna Babin’s novel The Strange Scent of Saffron, one of the two main characters sagely points out to the other, “I think you’re confusin domestic animals with wild ones.” In a novel rife with orphans, abandoned children, and a semi-feral fox, wildness is a dominant mode. Set in small-town Quebec in the late 1980s, the plot is catalyzed by the arrival of a mysterious young woman named Nil, her pet fox, and the chaotic, yet electric energy that the pair transmit. Jacob, the owner of a local restaurant, takes the young woman in, sensing that her abrasive exterior masks deep pain and vulnerability.

Jacob, however, has his own set of secrets, including a foreboding medical diagnosis, an unresolved history with his previous lover, and a desperate plan to rob a local saffron farm as a bid to secure his future. The pasts and futures of Nil and Jacob intersect as the two of them try to outrun their demons and stake out their survival. The stories of other characters, notably Nil’s uncle and twin brother and Jacob’s friends, co-workers, and father, intertwine with a fragmentary, dream-like subplot describing two siblings harvesting saffron in India. The narrative dances between suspense, reverie, and the black comedy of a small town where both love and secrets run deep, often through multiple generations. 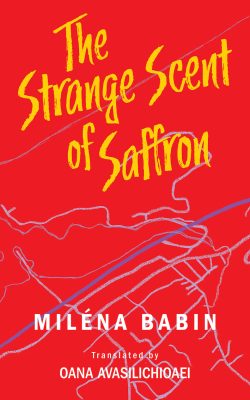 The intimacy between brothers and sisters is represented as one of the key bonds in the novel, but also a space that can easily tip into darkness, violence, and abuse. Nil’s twin brother Yoav pursues her relentlessly throughout the novel, while Jacob is haunted by memories of his adopted sister Arielle and the tragic consequences of their shadowy relationship. In India, Amar and Alaka share a more salubrious relationship, but are also depicted on the cusp of emerging from childhood into an adult world that may not allow them to continue their closeness.

The context of these sibling relationships colours the central rapport between Jacob and Nil, which shifts fluidly between distrust, desire, admiration, and affection. The narrative is presented in alternating sections, with Jacob’s parts narrated in the first person, Nil’s in the third. The contrast provides insights into each character and their dynamics; Jacob often feels the tender exasperation of an older brother when he laments, “To describe Nil in one word, you’d need to invent one that combined the qualifiers invasive, intrusive, and impudent.”

Blood is a literal and metaphoric presence throughout the novel: characters menstruate, wound themselves, contract and spread HIV, while also grappling with the blood ties of family and how they can become a snare trap. Babin’s writing is deeply invested in representing the corporeal world, even when that world becomes grotesque. There is the impression that no topic is off limits, especially in the relation to the bodies of young women. Utterly devoid of any attempt at sanitization, Babin depicts young female characters who lust, hunger, bleed, and contract and spread disease.

When Jacob reflects, “I kept telling myself that women absolutely have the right to give themselves pleasure, and that every one of us can be whatever monster we wish to be in our private moments,” he seems to be reminding both himself and the reader of this jarring reality. The pervasive presence of food, from the succulence of osso bucco to the floral earthiness of saffron, provides a juxtaposition to the realities of blood, vomit, and secretion, and extends the novel’s preoccupation with twinning and doubling. Food, the novel suggests, is the sibling of blood and sex and disease, and all of these things hold the key to a wildness that is never fully tamed, just more apparent in some than in others.mRb