A review of The Supreme Orchestra by David Turgeon

Some novels hold their secrets tightly, leaving the reader to fumble in the darkness for any sense of where the book is leading them, while others let flow a glut of detail that can overwhelm and at times obscure what’s happening beneath the surface. Montreal writer David Turgeon manages to do both simultaneously in The Supreme Orchestra. The result is an entertaining and oftentimes convoluted novel that seems to be going everywhere, and nowhere, at once.

To begin to describe the plot intricacies of The Supreme Orchestra would pull a thread that stretches well beyond my word limit. It’s both an intriguing vivisection of the art scene in Bruant – a city in a fictional European country – and an espionage thriller replete with kidnappings, secret codes embedded in the lyrics of pop songs, and mysterious car rides in the back of dark sedans. These shady machinations, we eventually glean, are integral to the fate of a fictional African nation and its capital, Port Merveille. Both are worlds of money, power, ego, and deception. 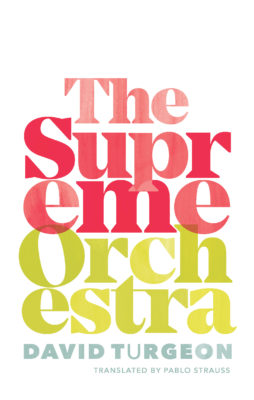 For a book of fewer than 200 pages, the ceaseless parade of characters would make a Russian novelist blush. There’s Simone, an erotic artist of indeterminate age. Fabrice Mansaré, a.k.a. Charles Rose for espionage purposes. Alban Wouters, a gallery owner. Faya, Simone’s lover, nebulously connected to Fabrice. Pierre-Luc, an art teacher, and his student, Sarah-Jeanne Loubier. The entire entourage of the Bruant art scene, including a character named The Bear, who likes to cross-stitch and may or may not be an actual bear. Esma Lorca, tattoo artist and friend of Simone. Célestine, charismatic singer of the pop band Poupée Sincere, also known by another moniker. General Mansaré, despotic military leader of Port Merveille, and Alice, Fabrice’s long-lost sister. Subcommander Sorgue, a far-left coup leader. Debruyn, an agent in an organization called the Service, as well as his unnamed partner, the bafflingly omniscient narrator of the novel. There’s Problem 30, an agent provocateur from Melanco, an opposition spy agency. Not to mention Princess Cécile, her estranged husband Prince Ludwig, and his henchman, Émilien Surville. And last but not least – and I’m leaving a few out – the titular character, The Supreme Orchestra, a 148-carat pink diamond.

It would be an understatement to call Turgeon’s style maximal. I often found myself searching for the greater significance in an overflow of digression and detail, and he pushes this to a perverse degree. With serpentine sentences loaded with quotidian observation, a penchant for the rich possibilities of language, and a constant regard for the absurd, he displays impressive insights into the motivations and manipulations of human behaviour. (Pablo Strauss has done a commendable job on the English translation in this regard). It’s also writing that shows its seams. In fact, at one point, Turgeon seems to self-reflexively write himself into the narrative, describing a film Simone and Charles watch as “about a simple young man condemned to invent stories in order, he claimed, to invent himself. These stories hung by the most tenuous of threads, forever threatening to snap, and they advanced to their conclusion via the most circuitous of paths, leaving us with at best a jury-rigged ending.”

This is an apt description of the book itself. For a novel with so much overwrought complexity, the ending indeed falls together with laughable simplicity and idealism. Throughout The Supreme Orchestra, Turgeon makes it apparent that clarity and plausibility are secondary to the novel’s role as an act of creation. At one point, in a moment of aesthetic reflection, the narrator opines: “Art is work for work’s sake.” David Turgeon seems to have taken that maxim to heart in creating The Supreme Orchestra. mRb