A review of The Sweet Sixteen by Linda Kay 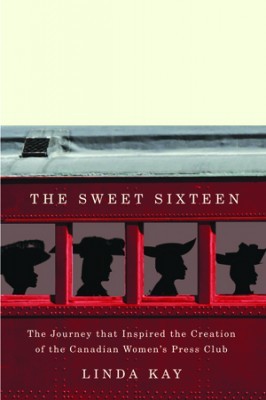 In 1904, sixteen Canadian women set out on the Canadian Pacific Railway to the St. Louis World’s Fair. Dubbed “The Sweet Sixteen,” they would cover the fair as reporters for various newspapers. Though not all were working journalists, all were iconoclasts in one way or another: women who worked outside the home, women with ties to Canada’s cultural elite, opinionated women who nurtured their writing craft within the cramped space of the “Women’s Pages.” By the time they returned to Canada, they had solidified their resolve to make Canada a friendlier place for female journalists, and the Canadian Women’s Press Club was born.

Meticulously researched and capably written, The Sweet Sixteen is Linda Kay’s attempt to bring these women and their journey to life. She introduces characters like Kathleen “Kit” Coleman, the first woman ever to act as an accredited war correspondent; Robertine Barry, journalist and founder of Le Journal de Françoise; Margaret Graham, who initiated the trip to St. Louis by demanding equal opportunity for female journalists; and Grace Denison, a seasoned columnist for Saturday Night. Together the sixteen formed a group that may not be diverse by today’s standards, but that was remarkable for the time – Anglophone and Francophone, veteran and novice, small-town and big smoke women with a shared passion for writing and reporting.

One of the book’s most interesting aspects is seeing the World’s Fair through these women’s eyes. Today it’s hard to conceive of how important these fairs once were; before television, the internet, and the proliferation of global industry, World’s Fairs were the only opportunity for regular people to get a look at the latest technological and scientific breakthroughs (in 1904, baby incubators were the hot new thing), or to see the art and ways of life of other cultures (Irish linens and Japanese tapestries were among the items exclaimed upon in St. Louis). They were also home to the biggest, most outrageous spectacles going: the St. Louis World’s Fair featured a re-enactment of a battle of the Boer War starring none other than General Piet Cronjé, the Boer commander who had been defeated by the British Empire only a few years before. (Naturally the women’s opinions on this spectacle were mixed.) Coming from a Canada that was largely white and Protestant, the Sweet Sixteen were enchanted by what they saw at the fair, waxing poetic over the harmony, richness of culture, and “kinship of man” on display.

Kay also highlights some of the internal tensions these correspondents must have faced as high-profile female public figures. Although as working women they were pioneers and progressives, many argued against women’s suffrage, claiming, as Sweet Sixteener Kate Simpson Hayes did, that while it was acceptable for women to guide and support their husbands and sons, “a woman had no business openly participating in the political process.” Her sentiments were shared by Kit Coleman and Grace Denison, among others. It’s an interesting stage in the feminist evolution, where women could be public and independent, but only as individuals – they didn’t tie their successes to a broader movement. The Press Club they founded was a first step toward strengthening solidarity and opening doors for female journalists. They taught feminism by example, not by screed, setting a precedent that we take for granted today.

Although in later chapters the book plods a bit as it details the Press Club’s rise and fall, The Sweet Sixteen generally offers a spirited and interesting glimpse into the lives of some unusual women on an uncommon journey. mRb