Class War on the High Seas

A review of The Swells by Will Aitken

Taking on heavy themes with a light touch is no small feat. Montreal-based author and critic Will Aitken tackles this by creating a microcosm of global inequality on an ocean liner in his fourth novel, The Swells, a bawdy satire in which a sumptuous cruise ship spirals into class war.

Briony is the hinge between these two worlds. Despite her couture wardrobe, “boarding-school manners,” and elegant onboard penthouse, she’s destitute and essentially homeless. As the Emerald Tranquility lifts anchor, Briony has given up her apartment to coast between opulent assignments, earning $200 a story but living so closely among the super-rich that she mostly forgets she’s not one of them. 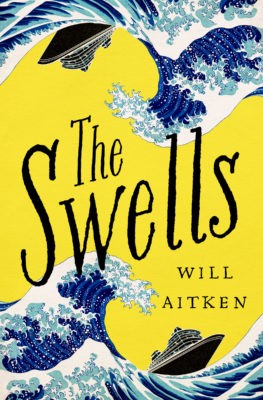 The Swells
Will Aitken

She spends the first part of the book swapping bon mots and bodily fluids with other passengers, even as inauspicious events accumulate – a run-in with pirates, several beheadings, mysterious systems failures, and finally a full-on mutiny. A revolution upends the ship’s class order, and the cruise’s moneyed passengers swab the decks under their erstwhile servants’ supervision. This reversal of fortunes ultimately leaves the Emerald Tranquility vulnerable to greater dangers.

As a journalist, Briony finds herself in that weird in-between where many well-educated arts and media workers live. She’s rich in cultural capital and can indulge in some of wealth’s sweet-smelling, high-thread-count pleasures, yet her earnings place her well below the poverty line. This leaves her uncertain of where her alignments lie as class conflict overtakes the Emerald Tranquility, and her ambivalence is at the heart of Aitken’s storytelling.

Briony becomes fixated and romantically entangled with Mrs. Moore, a lower-deck passenger who’s radicalizing the workers and fomenting insurrection. At once a phantom Briony chases and a ventriloquist for the book’s political themes, Moore utters the difficult truths that Briony must absorb about how bourgeois desire fuels global inequality:

“You and that glossy rag you work for promote being rich as the ultimate value, the summit we’d all like to reach, and if we can’t manage that, at least we get to delight in the brilliance of those who did attain it or were born there. We elevate them with our quenchless dreams of longing.”

Pitched against Aitken’s ribald banter, these speeches feel uneven, and at times the whimsy of his parody falls flat alongside its tragedies. One grim scene depicts a factory’s collapse as cruise passengers on shore leave look on. The gag is that ambulances are sent to shepherd the rich back to their ship safely while the poor writhe in agony unattended. But Aitken’s blithe retelling similarly refuses to see the crushed workers lying twisted among the building’s ruins like “bloody rebar” – the tone is so playful it reproduces the invisible suffering it aims to critique. The Swells fares better taking shots at our betters, such as when an exiled heiress and her starchitect lover proclaim allegiance to the mutiny in their sumptuous suite or gush over the chicness of cleaning supplies.

The point of Aitken’s caricatures is to showcase Briony’s metamorphosis into a class-conscious citizen of the world. While the horrors accumulate, the campy tone gives way to moralism as Briony learns to give a toss about others. But Briony is pretty unlikeable, and even in the face of the countless atrocities Aitken piles on, her about-face feels quite sudden. As a bildungsroman, it doesn’t really build. So while there are some great moments, the comedy collapses under the weight of Aitken’s thematic ambitions.mRb