A review of The Teardown by David Homel

Expect neither Skil saws nor crowbars in Montreal writer and translator David Homel’s eighth novel: the “teardown” he explores with perspicacity is the mindset of a narrator who, like the older homes in his childhood neighbourhood, remains structurally sound but feels unjustly rendered worthless in a volatile, financialized new world order.

Phil Brenner is a middle-aged journalist with a flagging career, a struggling marriage, and fraught relationships with his daughters. After “a good run” that lasted a couple of decades, he finds himself mired in a slump, casting around for a way out and a sense of who’s to blame.

His culprits are familiar: the “culture of complaint,” “political correctness,” and “the society of systemic.” More interesting is the well-plotted series of events on which Phil pins his hopes for renewal. As his marriage stagnates, he cultivates a female friendship that may or not be headed toward affairland. And he connects with his older daughter, Dana, who has mental health issues, through a shared vocation for research and writing. 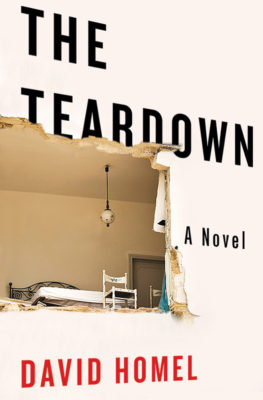 Most importantly, Phil gets a new assignment. The European refugee crisis has rekindled his interest in the Balkans, where he did his best work. He brings Dana in the hope that a shared fact-finding mission will yank her from “the house where she was the star of her disorder,” as the thrill of front-line journalism will jog him from his slump. What could go wrong?

As it happens, very little. The pair’s authentic-feeling voyage of discovery provides glimpses of the refugee crisis and the rigours of life in a region torn apart by the Yugoslav Wars. As Phil strives to locate the complicated core of the story, Dana discovers a gift for connecting with strangers.

The Teardown is a cleanly written, tightly structured novel with a satisfying narrative thrust. And there is pathos in watching Brenner, who is “paper nostalgic,” assemble the mental picture that connects his first job wrangling bales of newspapers and the current state of journalism in an unbroken arc:

Even before the train ground to a halt with that metal-on-metal sound he loved, the conductors would be throwing off bales […] The ink on page one was practically still wet. […] people needed to know, that’s why there were papers, those daily sheets that had taught him how to read, starting with the box scores in the sports section. People holding sheets of paper with fresh ink that stained their hands – that was the real story.

When he ventures into social analysis, Phil is on thinner ice. Harping on the “culture of complaint” aligns The Teardown with a tiresome current of middle-aged male whinging that seems to be everywhere just as it laments its loss of privilege and access. Boo hoo. The sheer volume of space national magazines and newspapers and TV networks and publishers allot to “disempowered” middle-aged white males make it hard not to conclude that rumours of the decline of white male privilege have been greatly exaggerated.

The narrator also tries to critically engage with the guilt by association he feels men face today. But his conclusion – he has never once misbehaved – leaves us with an exploration of consent and male guilt that does not feel plausible, representative, or germane to the current conversation.

One can imagine The Teardown resonating with baby boomers startled to find themselves no longer at the centre of public discourse. It’s harder to picture the great many who’ve grown weary of the white, middle-aged male gaze sticking with this novel. And that’s too bad. What better form is there than two hundred pages of well-wrought fiction, created with labour and care, to develop understanding and empathy that might cut through the glib hostility of so much contemporary discourse?

The Teardown’s interest will likely come down to whether readers really want another deep dive into the white, middle-aged male psyche. And let’s be honest: if they don’t, we men have only ourselves to blame. mRb

Pablo Strauss’s recent translations of Quebec fiction include Of Vengeance, Benediction, The Country Will Bring Us No Peace, and The Dishwasher. After fifteen years in Quebec City, he still misses the West Coast sometimes.