Around the World in 365 Days

A review of The Traveller by Daniel Baylis

Young Canadians travelling abroad have a reputation for being pleasant, earnest, and occasionally prickly. Daniel Baylis is just such a Canadian, searching for social engagement, and meaning at a point in his late twenties when, for some people, working life can begin to look like a protracted actuarial exercise. The Traveller is the true story of the year Baylis spent volunteer-circumnavigating the world. Twelve months. Twelve countries. Twelve volunteer stints. Or that was the plan anyway.

Descriptions of odd meals, or his problems in securing vermin-free lodging, make for some amusing vignettes but the heart of the story is the extent to which many of the volunteer-for-lodging situations fail to meet his expectations. He is searching for genuine connections and while he finds good people, many of the volunteer posts amount to free labour for substandard lodging, with some exploitive and peculiar hosts. He avoids run-ins with said hosts; he’s not big on confrontations, preferring to brood “silently”. 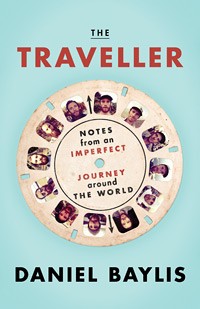 Part of the Thing about this book is that it was self-published and crowd-funded – 250 people donated the ten thousand dollars it took to bring the project to fruition. Writing the book began as soon as Baylis’s adventure finished, so the recollections still have rawness and immediacy locked inside; this is refreshing, to a certain extent, given that the long journey much writing takes from conception to publication often leaves it desiccated. The trade-off is that some material could have been improved through editorial challenge or emotional distance. The copy-editing was clearly strong because the prose reads smoothly in a voicing that is natural and redolent of the pop-culture echo chamber that’s driving today’s language. But travel writing is not about waxing poetic, or complain-bragging; at its best, it conjures enough of a setting or moment to let the reader’s experience fill in the rest. In this regard, The Traveller is really more diary than travelogue.

Baylis is funny, and millennial humour tends to be self-depreciating. He is self-conscious, which he again manages with self-depreciation, perhaps so as not to seem to be bragging about his big adventure. He sticks to the periphery of most events, and when he does engage he focuses on his own ineptness to the extent that it can get in the way of the moments he’s trying to create: like when he ventures into a cave in Laos and talks so much about his breathlessness that he doesn’t describe the cave, or the Buddhas it contains, or the impact of being there.

The Traveller is a nice story, of a nice young man thinking critically about his place in the world, measured with the yardstick of current ideals about social relevance and engagement. It should instead be called A Traveller, as this is not an iconic story; it’s the specific story of one man who packed a bag and left home to see what he could find abroad – just as thousands of Canadians (and Australians, and Germans, and Israelis…) do each year. It will bring smiles to the face of anyone who has numbered among these thousands in the past, and it will provide caution and enticement for anyone who is considering taking their year in the future.

The project, carried off with all the enthusiasm and self-empowerment tools of the Now, makes one wonder what modern writing would feel like if more people published this way. The Traveller is a fine first offering, but it will be worth watching for what Baylis does next, because it’s clear he’s going to do something.