A review of The Wire Devils by Frank L. Packard

The only Frank L. Packard book I’ve ever found at a Montreal bookstore was in the “FREE” box at Cheap Thrills.

I couldn’t believe my luck. 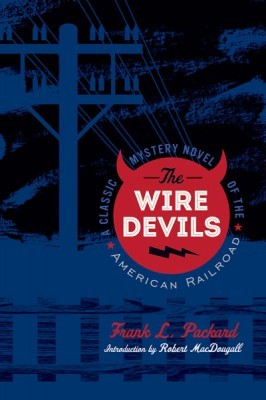 You don’t hear Packard’s name in Montreal these days, but a century ago he was the city’s bestselling novelist. His fame was such that British publisher Hodder & Stoughton took to substituting the usual author credit with slogans like “It’s hard to beat PACKARD”.

It’s thought that Packard sold well over four million books in his lifetime, which began in 1877 in Montreal and ended sixty-five years later. Commercially, his greatest creation was Jimmie Dale, a masked millionaire crime fighter known to the public as “The Gray Seal.” The Green Hornet, The Shadow, and The Batman followed in Jimmie’s wake.

The reissue of Packard’s 1918 novel The Wire Devils focuses on “The Hawk,” an altogether different sort of masked man. On the surface, he is in every way a gentleman thief. The well-groomed Hawk rides the rails like a hobo, but it’s only so that he can commit crimes of a very clever nature. His lawless rivals, the Wire Devils of the title, derive their name from a mysterious ability to tap into a railroad’s telegraph, which in turn allows them to communicate with one another by code. The Hawk listens, then swoops in to steal targeted money and items before the gang has a chance to arrive.

This is an episodic novel, with the Hawk dodging both the Wire Devils and the railroad’s detectives. It relies heavily on coincidence and convenience – a well-positioned trap door, overheard conversations, and chance encounters propel the novel forward. I couldn’t help but smile at this sentence: “‘I guess I played in luck to-night,’ said the Hawk softly, and for the second time that night. ‘Yes, I guess I did.’”

In his entertaining and informative introduction, Robert MacDougall, an associate professor at the University of Western Ontario, defines The Wire Devils as a “wire thriller,” one of “a string of novels from the late nineteenth and early twentieth centuries that used the railroad, telegraph, and telephone as a backdrop for adventure.” In this regard, the book is something of a late entry, following such titles as Frederick Van Rensselaer Dey’s Fighting Electric Fiends (1898), and The Wire Tappers (1906) and Phantom Wires (1907) by Packard’s fellow forgotten Canadian writer Arthur Stringer.

Packard had an advantage over other wire thriller writers in that he studied civil engineering at McGill and spent much of his adult life working for Canadian Pacific. The short stories collected in On the Iron at Big Cloud (1911), his first book, draw heavily on his knowledge of railroads and the people they employ. Packard’s greatest strength as a writer – the reason his work is of value today – lies in its authenticity. It’s true that the plots of his thrillers – wire and otherwise – lean toward the formulaic and are filled with unlikely coincidences, but he had a great talent for creating realistic, believable characters, atmosphere, and setting. Packard achieved this in part by meeting with convicted criminals, participating in police raids, and travelling to the locations, often exotic, in which his novels take place. “If we are convinced by Packard’s descriptions of telegraph sounds, taps and junctions,” writes MacDougall, “we can be carried along by the engine of his story, and we are less likely to be derailed by its more preposterous twists and turns.”

The University of Minnesota Press bills The Wire Devils as “a classic mystery novel of the American railroad.” I suppose it is. MacDougall points to Frank Donovan, “the chief chronicler of American railroad literature,” who considered Packard second only to Frank Hamilton Spearman. The Wire Devils has next to nothing to do with Canada; the author’s lone nod of recognition comes through the naming of Selkirk, the fictional American city that serves as the Hawk’s home base.

A commercial writer, Packard knew that the real money lay in the republic to the south. The Wire Devils debuted as a serial in a 1917 issue of New York’s Popular Magazine, and was published as a book the following year in the same city by transplanted Torontonian George H. Doran.

Hollywood made twelve feature films from Packard’s stories, and George M. Cohan turned one novel into a successful Broadway play that ran in the Astor Theatre. Yet the author resisted the double hook of Tinseltown and the Great White Way, instead settling with his wife in Lachine. Never one to seek the limelight, he worked with the discipline of a good engineer, producing more than a hundred short stories and well over two dozen novels in three decades.

The Wire Devils is not his best – of those I’ve read, I suggest The Miracle Man (1914), the novel Cohan turned into a boffo Broadway drama. Still, The Wire Devils is in print, which is more than can be said for any of Packard’s thirty odd other titles. It stumbles and falls only in the final chapter; a brief misstep that’s cobbled on to provide some sort of moral resolution. An unwelcome twist, it’s in keeping with the author’s devotion as a member of the congregation of St. James the Apostle Anglican Church, which today is home to Montreal’s Writers’ Chapel.

Brian Busby is the author of A Gentleman of Pleasure: One Life of John Glassco, Poet, Translator, Memoirist and Pornographer. His blog, The Dusty Bookcase, focuses on Canadian literature’s neglected, forgotten, and ignored. He serves on the Board of the Writers’ Chapel Trust.

Brian Busby is the author of A Gentleman of Pleasure: One Life of John Glassco, Poet, Translator, Memoirist and Pornographer. His blog, The Dusty Bookcase, focuses on Canadian literature’s neglected, forgotten, and ignored. He serves on the Board of the Writers’ Chapel Trust.