The World is Moving Around Me

At 4:53 p.m., on January 12, 2010, Dany Laferrière was waiting for his lobster with two dinner companions at the restaurant of the Hôtel Karibe. The award-winning Montreal writer and Haitian ex-pat was in Port-au-Prince for the international book and film festival: Étonnants Voyageurs. As he bit into a piece of bread, he heard a terrible explosion. At first, he thought it was a machine gun, while later others would say it sounded like a train. When the cooks ran out of the kitchen, he assumed that a boiler had exploded. Laferrière and his companions fled the restaurant and lay on their backs in the hotel courtyard when the earth began to shake “like a piece of paper whipped by the wind.” They heard the roar of cement buildings crumbling and then saw a cloud of dust rising into the late afternoon sky. In his memoir The World is Moving Around Me, Laferrière writes that it was “as if a professional dynamiter had received the express order to destroy an entire city without blocking the streets so the cranes could pass.” 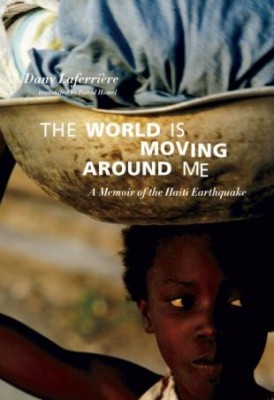 Exactly three years ago, Haiti was levelled by a massive earthquake, and while the international media was quick to give us an overall picture of the devastation through harrowing footage and dire statistics, it largely ignored the resilience of the Haitian people, something that the writer makes abundantly clear in his memoir. “The people of Haiti are champions in difficult situations, at ease in exceptional circumstances,” Laferrière told me at an interview on an overcast December afternoon at the Café Cherrier, in Montreal. “They’ve been doing just that for 200 years, since Haiti’s independence.”

The World is Moving Around Me is made up of a series of first-person vignettes. Laferrière zeroes in on poignant details of the aftermath, bringing this cataclysmic event down to a human scale. At the Hôtel Karibe, he and the other hotel guests slept outside on the tennis court after the initial quake, enduring another 43 tremors through the night. Near the hotel, a woman spent the night speaking to her husband and three children trapped beneath crumbled concrete, each of them eventually falling silent except for the squalls of her baby. In the end, only the smiling infant was pulled from the rubble. With limited means of communication, the author only realized the unfathomable depth of the disaster in the early hours of the next morning, when a large crowd of people had formed in the street to sing, using song to assuage their pain.  In the hours that followed, news trickled in of the destruction of the Presidential Palace, the courthouse, and the taxation and pension office.

After overcoming the initial shock, survivors had to contend with not only their survivor’s guilt, but also their fear of not finding their loved ones. Fortunately, Laferrière’s friend arrived at the hotel, offering to drive him to see his mother and sister, whom he had been unable to reach. On their way, the first thing they saw on the side of the road was a woman sitting with her back to a wall selling a dozen mangoes spread out in front of her. The mango vendor is a prime example of what the author refers to as the Haitian resilience – a woman who returns to selling mangoes, her livelihood, the day after a massive earthquake. “The mango vendor became the symbol of renewal after the earthquake,” Laferrière told me. “That was the point when people started to pick themselves up.” What Laferrière called the “human” side of the reconstruction had begun.

This statement, however, is in stark contrast with the message that the powerful western media delivered in the wake of the disaster. Haiti was “cursed,” and the headlining statistics supported that label: 318,000 deaths, 300,000 injured, and 1 million left homeless. The author convincingly argues that this type of reporting only undermined the efforts of Haitians to rise to their considerable challenge. In the vignette A Semantic Battle, he writes, “But [cursed is] not the right word, especially when you see the energy and dignity displayed by the nation as it faces one of the most difficult tests of our time…. All some commentator has to say is the word ‘curse’ on the airwaves and it spreads like a cancer.”

The media presented a panoramic view of the disaster, while Laferrière chose to tell the story as it unfolded around him, fleshing out the tiny details to give a beautifully layered, thoughtful account of his own first-hand experience. “In this type of situation, no one sees the entire situation,” he told me. “We only see the situation and the people in the immediate area. I understood this right away and didn’t try to give an overall picture.”

Laferrière’s memoir delivers much more food for thought about the human condition in the wake of a natural disaster than the superficial accounts broadcast by our up-to-the-minute media, with its barrage of statistics and horrific images. I asked Laferrière about his approach to literary reportage. “I wanted to see how a writer could describe an event that he was so closely involved in,” the author said. “And do it with aplomb, paying the event the respect it deserves and approaching it as art, while adhering to the principles of reporting.”

I also asked Laferrière how it fit into his body of work. He said, “I wrote it precisely because it was in line with my work. For me, it was fundamental, a way of making sense of the earthquake.” And that is exactly what the World Moving Around Me allows the reader to do – make sense of the earthquake. It also serves up a compelling argument for why we need more long-form journalism.