The Year Shakespeare Ruined My Life

The past few years have seen a surge in LGBTQ+ books for teenage audiences, especially following the release of Love, Simon, the extremely successful film adaptation of Becky Albertalli’s novel Simon Vs. The Homosapien Agenda. But while LGBTQ+ books vary vastly in quality, Dani Jansen’s The Year Shakespeare Ruined My Life is one of the best out there. This is a YA novel that provides a compelling twist on a typical high school romance by introducing us to likeable characters and a well-crafted storyline.

The Year Shakespeare Ruined My Life follows high school senior Alison, a girl who is abruptly put in charge of her school’s disastrous production of A Midsummer Night’s Dream by a lazy English teacher. At the same time, Alison is actively pursuing her goal of becoming her class’s valedictorian while navigating her crush on cast member Charlotte. And, of course, there are all the other inevitable dramas playing out backstage between the teenaged cast and crew. It may sound like a fairly standard teen romance plot, but Jansen breathes new life into it with the introduction of queer characters. This not only adds some much-needed diversity to a notoriously homogeneous genre but also heightens the stakes of the relationship between the characters, as they must deal with homophobia as well as their typical YA romance concerns. 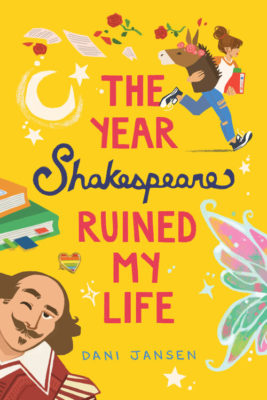 Jansen’s writing style is light and breezy, making her charming YA romance a quick, easy and enjoyable read. At no point does The Year Shakespeare Ruined My Life feel dense or daunting. However, it is not simplistic or shallow. Jansen doesn’t talk down to her audience. Instead, she strikes a balance between simplicity and depth, making for a story that is both impactful and fun to read.

A common pitfall of fiction about LGBTQ+ characters is its tendency to dwell on the struggles of queer and trans people instead showing the positive aspects of their lives. Thankfully, The Year Shakespeare Ruined My Life does not have this problem, as it features several happy queer characters and healthy, loving, same-sex relationships. While the novel’s overall tone is fairly lighthearted, it also includes moments of genuine emotional depth. We watch as Alison struggles to come out at school, deals with her girlfriend’s homophobic father, and helps a classmate come to terms with his sexuality. However, at no point are these moments used for shock value, and queer characters are not made to suffer gratuitously.

Jansen introduces us to a diverse and endearing cast of characters, including Alison’s no-nonsense best friend Becca, and Jenny, the tempestuous set painter. The author even infuses her antagonists with a degree of humanity and sympathy. In this way, each character is unique and three-dimensional, and many of them, particularly the insufferable Ben Weber and flamboyant drama teacher Mr. Evans, seem like people many of us really did encounter in our high school days.

The novel’s plot is also compelling and engaging. From the first page, the reader is drawn in by Alison’s tribulations and wants to see her succeed. Jansen uses enough foreshadowing for her plot twists to feel earned without giving away any surprises, and there are enough subplots to keep the story interesting without being confusing. The main plot progresses at a fast enough pace and never drags, but isn’t so fast-moving that it becomes confusing or hard to follow. All of these elements make The Year Shakespeare Ruined My Life an excellent choice for anyone in the market for a light-hearted, unique, entertaining, and well-written YA novel. mRb