This Country of Mine

A review of This Country of Mine by Didier Leclair

At the centre of Didier Leclair’s beautifully written and realized novel, This Country of Mine, is Dr. Apollinaire Mavoungou, a recent immigrant from an African country to Toronto. His professional qualifications still unrecognized, despite passing the required local exams, Apollinaire works at a call centre and moonlights illegally as a doctor to retain some semblance of his former life.

Adèle is Apollinaire’s attractive wife, the daughter of a chauffeur-driven government official and mother to his infant daughter. A trained nurse, she is worn out by working as a cleaning lady at a hotel and frustrated with their insecure, marginal life. Kevin Watson is Apollinaire’s landlord, a two-faced do-gooder. Then there is the AIDS-afflicted Jean de Gonzague, one of Apollinaire’s patients, and Antoine Koumba, a former torturer in the African country that Apollinaire has managed to escape. The action moves from cab rides with clients he picks up in a taxi he is borrowing from a friend, to the call centre, to Apollinaire’s apartment, to the homes of the various characters, and to Zanzibar, an expat bar. 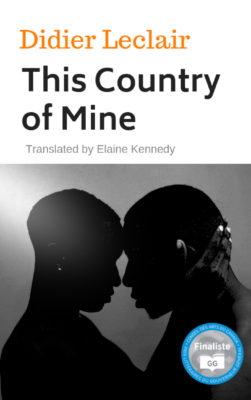 This Country of Mine
Didier Leclair
Translated by Elaine Kennedy

Though this is Leclair’s first book to be translated into English, the prize-winning author, who was born in Montreal to Rwandan parents, has written eight novels so far. The original novel, Ce pays qui est le mien, which was a finalist for the 2004Governor General’s Award for French-language fiction, was translated by Elaine Kennedy, whose rendering rapidly immerses the reader in a galaxy of compelling characters, relationships, and locales that define Apollinaire’s existence.

Leclair puts his finger on the angst immigrants experience when their qualifications are not recognized and they are routinely kept out of the jobs they were trained for:

Apollinaire felt he was the victim of a form of torture even more vicious than that in his homeland. He would have preferred physical pain to the systematic refusal of an invisible tormenter to give him back his vocation as a man of science, as a human being with the knowledge to save lives. This intellectual suffocation was all the more brutal because he didn’t know when it would cease.

And on the Western liberal stance, which berates racism, but does very little in actual terms to reduce it:

The entire Western world must have moaned with grief every time a Watson defended an immigrant in his neighbourhood newspaper. Yet the moaning never got anyone anywhere. The Kevin Watsons of this country of refuge didn’t have the ability to fight and ensure fairness for the orphan and widow. In fact, the Kevin Watsons of this host country doubted the competency of immigrants as much as the skeptics.

Apollinaire emerges as an honourable man, though he is not flawless. As with many of the other characters, Leclair paints a sympathetic picture, delving into his loss of self-confidence, and how he only feels momentarily like a man when he makes love to his wife, with whom he has a fraught relationship due to their difficult circumstances.

In a hard-hitting domestic scene, we see Apollinaire almost become a wife-beater. Leclair presents his male characters inside and out, showing how and why a decent man may get to such a point, and why a fifty-year-old man would pay a large dowry to marry a poor but ravishing twenty-year-old; and this is no easy feat.

Canada’s “coldness” (it is winter) is juxtaposed with elsewhere, and the strong yet conflicted relationship with the former homeland is well portrayed. When his cousin calls in the middle of the night, asking for money after years of silence, Apollinaire must respond, despite his own financial precarity. Cultural references like a story from his boyhood that Apollinaire tells his daughter, and the asides when he listens to the music of Manu Dibango or Miriam Makeba, further enrich the narrative.

The novel ends on a hopeful note, which is welcome, yet it feels a little pat, as Apollinaire’s central conflict gets resolved rather suddenly. The translator does a very good job, despite a handful of instances when the prose does not flow as smoothly as it could have. Overall, this complex, literary novel, imbued with a deep humanism, deserves a wide readership. mRb

Veena Gokhale, an immigrant shape-shifter, started her career as a journalist in Bombay. She has published Bombay Wali and Other Stories and Land for Fatimah, a novel (Guernica Editions). Veena lives in Montreal.