A review of Tour de l'île by MacKay L. Smith

MacKay L. Smith’s latest book, Tour de l’île: The 49 Historic Communities on the Shore of the Island of Montreal, covers the history and present circumstances of all the old communities that grew on the shores of Montréal island. It is a treasure trove of information from which readers could learn a lot.

For instance, that there are 234 islands in the Hochelaga Archipelago, of which Montréal is the largest. Ville-Marie, the future city of Montréal, was established in 1642. Lachine followed in 1667, Senneville in 1671, Rivière-des-Prairies in 1687, Sault-Au-Récollet in 1696, Pointe-Claire in 1714, etc. By 1741 there were eleven parishes on the island and nineteen forts. Eventually, there were forty-nine settlements, some of which grew into urban centres while others stayed decidedly rural. 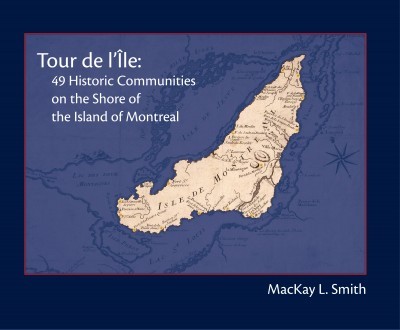 Tour de l’île
The 49 Historic Communities on the Shore of the Island of Montreal
MacKay L. Smith

By 1883 the St. Lawrence River had been dredged to a depth of eight metres, giving ocean ships access to Montréal. Edward Maxwell designed a grand new entrance for a house in Baie-D’Urfé when it became a town in 1911, thus creating the iconic Baie-D’Urfé town hall. There was a lovely hotel called Hôtel Péloquin in Ahuntsic a hundred years ago and a polo club in Cartierville. The first streetcar in Montréal? 1861. The first electric streetcar? 1892.

When the city of Montréal changed the name of Dorchester Blvd. to René-Lévesque in 1987, two municipalities opted to stick with Dorchester: the largely Anglophone and residential Westmount at the west end of the street, and the solidly francophone and industrialized Montréal-Est at the other end.

These are interesting facts, and the book contains lots of them. In truth, it could be a handy guide for tours of the various communities (though at nine inches by twelve, it isn’t pocket-sized). But Tour de l’île is a frustrating read.

The subject is good, the pictures are fine – both recent photographs and lovely old Notman prints – and the author has worked diligently to dig out a lot of interesting information about which village was where and who founded it and who built the first houses and what happened in the decades or centuries that followed, etc., but the presentation is so haphazard and so reader-unfriendly, so rife with errors and inconsistencies in spelling and grammar and punctuation and style, that it’s impossible to enjoy the book. Why would someone go to all the trouble of gathering all these fine facts and photos and then not make the effort to present them coherently, to spell words and names correctly, to use commas and capitals sensibly, to proofread? What are we to make of a sentence that says, “This bridge gave the western North Shore their first train, first train, it went to Saint-Jerome”?

The book could be so much better. Good, meaty captions under the photos would certainly have been preferable to the relevant information being scattered, as it is, in the text, sometimes not even on the appropriate page. The spelling of place names is poor; the absence of hyphens in French names is appalling. Commas around subordinate clauses are usually missing. Non-proper nouns are routinely wrongly capitalized. Numbers are randomly written as numerals or spelled out. Southeast is South East or SE or south-east, but never southeast. And it should be Smiths Falls, not Smith Falls, diseases not deseases, De Lorimier not DeLormier, shrubs not scrubs, Hugh Allan not Hugh Alan, Black Horse Ale not Beer, Canadian Broadcasting Corporation not Company, DesBaillets not Desbaillets, aesthetics not ascetics, Hudson’s Bay post not Hudson’s Bay past. In twenty-first-century Canada, “centre” is spelled centre, not center, and punctuation is placed inside closing quotation marks. The sloppiness never ends, and the reader craves order, chronology, consistency, and care.

In the past two decades, MacKay L. Smith has put out a half dozen volumes under his banner Infinite Books. His subjects are good – the history of McGill University, a profile of Sherbrooke Street, the Jews of Montréal – and the book-buying public has rewarded him (the Sherbrooke Street book sold 4000 copies in English and French editions). In short, he is an experienced and successful author, which makes one wonder how he can be so careful in some aspects of his business and so careless in others.

Dane Lanken, author of Montreal Movie Palaces: Great theatres of the golden era 1884-1938 (Penumbra Press, 1993), was a co-founder in 1973 of the heritage group Save Montreal.