A review of Towners & Other Stories by Josh Quirion

The Eastern Townships is a picturesque geographical expanse that once constituted the seigneuries south of the Saint Lawrence River and east of Montreal. It boasts not only an attractive rural landscape, but also a proud lineage of writers who have either lived (or still live) there, or extol its manifold virtues, including the likes of Mordecai Richler, D.G. Jones, F.R. Scott, Anne Fortier, Susan Briscoe, Ann Scowcroft, Ralph Gustafson, and, of course, Louise Penny. To this range of authors, we may admit Josh Quirion, whose book, Towners & Other Stories, was published by Shoreline Press this summer.

Shoreline Press has traditionally focused on publishing first-time authors, as is the case here – a laudable enterprise, if skilled editors are engaged in the process. Towners & Other Stories, Quirion’s debut collection, features a novella and eight short stories, all of which largely concentrate on masculinist aspects of Eastern Townships culture. At a time when there is a demand for narratives that address cultures, identities, or persons that have been marginalized, one could argue that the collection’s emphasis on a community outside of a cosmopolitan centre provides an alternative view; but although it does focus on a small, rural community, it is nonetheless framed by a white, middle-class perspective. 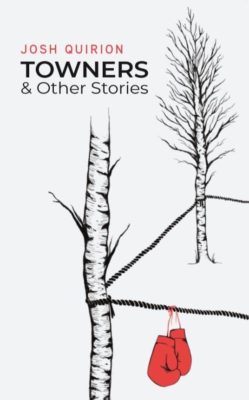 The novella, “Towners,” in particular, highlights the dilemma of the protagonist, Everett Winter, who is caught between the polarity of the urbane life of the “metro” (Montreal) and the brawling lifestyle of brawny “towner” men (presumably in Lennoxville or Sherbrooke). Fundamentally a towner and, at one time, a local boxing champion, Winter has enrolled at “Auld University” (likely an oblique reference to Bishop’s University, from which Quirion graduated). There, he meets and falls in love with a young woman named Meadow Jackson, who is part of the Montreal elite. The story chronicles the complications that arise when such love unfolds between people from completely different worlds. Winter is attracted to Jackson and her world, but he is simultaneously drawn to his legendary boxing coach, Morgan Quinley, and the culture that he and his friends there represent.

“Towners” draws on literary motifs and themes that have become to some degree cliché, including that of the poor-boy-meets-rich-girl variety. While the context in the Eastern Townships may be relatively fresh, the narrative intrigue is less so. Indeed, much of the story – both its narrative line and expression – needed to be subjected to greater editorial rigour: it is strewn with mannered dialogue, odd idiomatic expressions, and the overuse of adverbs and adjectives (for instance, “parasitical pariah”). The tendency to overwrite impedes narrative flow. Here is one of several examples: “He meditated, accustoming himself to his respiration in the immeasurable crepuscular hayfields of White Pine.”

By contrast, the short stories are crisper, more sharply delineated, and display Quirion’s potential. Each story is relatively spare, many of them offering an unexpected, swift resolution that is precise in its delivery. “The Beast in the Basement,” for example, is a lean, unflinching, and harrowing account delineated in fewer than three pages. “Night Flowers” is also a streamlined narrative, which characterizes a young man’s proclivities that threaten to undermine his relationship with his partner, Stella. Even here, however, there are moments when Quirion does far too much “telling,” and does not allow the stories to unfold on their own. The collection as a whole thus confirms that, while he has not fully matured as a writer, Quirion can eventually achieve his artistic potential. mRb