Traces of the Past

A review of Traces of the Past by Sara Ferdman Tauben 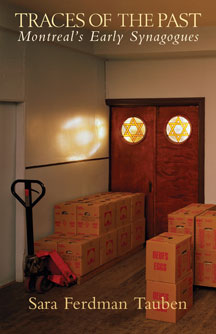 Traces of the Past
Montreal’s Early Synagogues
Sara Ferdman Tauben

Montrealers like to say, with enduring pride, that you can’t throw a stone without hitting a church. GPS not needed, simply find the spires in the distance and onward go. Over time, however, this Catholic skyline has all but sunk under the impetus of the Quiet Revolution and upscale condos.

And so we treasure the archaeological artefacts of Montreal’s religious history: a crucifix here, an organ there, a stained glass window for your kitchen. But Sara Ferdman Tauben, author of Traces of the Past: Montreal’s Early Synagogues is the archaeologist who stays at the dig after all the others have gone home.

What Ferdman Tauben dusts off is the story of Montreal’s synagogues. The city’s first Jewish residents established the Shearith Israel congregation (also known as the Spanish and Portuguese Synagogue) as long ago as 1768. The first synagogue in Canada, it was also the first non-Catholic house of worship in Quebec.

Ferdman Tauben is the archaeologist who stays at the dig after all the others have gone home.

As the community moved up the Main and westward, they dotted neighbourhoods with shuls, small shtibels, and built synagogues. More than mere places of worship, the synagogues united disparate waves of immigrants into cohesive communities, providing amenities such as meeting rooms, kitchens, gymnasiums, halls, and classrooms.

Like their Christian counterparts, the synagogues reflected the financial, organizational, and architectural ambitions of their congregants. From modest converted duplexes (the Bagg Street Schul) to “the city’s first example of the Roman-Byzantine style” (Temple Emanu-El), they were an unmistakable counterpoint to the otherwise “more commanding ideologies” that surrounded them.

As the Jewish community grew, splintered, evolved, retracted, reformed, and grew again, entire congregations moved first north, then west, picking up stakes and migrating half way across town. In their wake, the splintered groups swallowed their pride and merged together, forming compound groups in a last ditch effort to survive in situ. The Chevra Shaas Adath Yeshurun Hadrath Kodesh Shevet Achim Chaverim Kol Israel d’Bet Avraham, for example, was an amalgamation of five former downtown congregations.

Likewise, she notes the relationships – or lack thereof – between the Conservatives and the Reformers, the traditionalists and the “moderns,” and between everybody and the Hasidim. Fascinating portraits of individuals emerge in the process: the Parnass family, for example, most of whom played leadership roles in the community, including the women; or the chatty anecdotes from individual congregants. Sam Birenbaum, long-time secretary of the Anshei Ozeroff congregation in the 1920s, writes: “As fate would have it, we settled in Montreal where daily life in its ‘Hoo-Ha’ was ready to swallow us (up).”

Ferdman Tauben has clearly spent many hours in the archives, poring over letters, blueprints, meeting minutes, shopping lists, attendance records, and so on. What emerges, surprisingly, is a lively and personable account of a vibrant community on the move. Further, she teases out the knots between historical record and its messier companion, the truth. The story of the Beth Yehuda on Duluth, for example, bears this out. Its congregants beamed that their synagogue “with splendour and glory … was the pride of all Montreal Jews.” But Ferdman Tauben immediately reaches for that next dusty box in the archives, and smiles at the crumpled note otherwise overlooked. “In the treasury there was not even one cent … All this cost money, which wasn’t there,” reveals a 1940 letter.

While written for those interested in Montreal’s Jewish history, Traces of the Past is a valuable work for anyone interested in the cityscape, urban planning, architecture, religion, or minority communities. Yet, while she mixes anecdotes and archival research with ease, there is no mistaking that her priority is getting the facts straight and paying homage to the buildings themselves. Written with refreshing spareness, it is rich in detail and texture. It can also occasionally feel like an onslaught of information, and more than once I found myself flipping forwards and backwards and forwards again, having gotten lost in Beth this or Shaar that. But to accuse her of erring on the side of detail is like telling St-Viateur Bagel to go easy on the sesame seeds.

Now that many of Montreal’s original synagogues have been converted into schools, condos, and, yes, even churches, Traces of the Past is an important contribution to the history of Quebec. mRb