A review of Turbulent Empires by Mike Mason

Context is everything. If there’s anything to be learned from watching the news in the age of Trump (and there’s a lot), it’s the peril of reading about and reacting to world events divorced from their historical nuances. Mike Mason’s Turbulent Empires: A History of Global Capitalism since 1945 might help.

The book is a sweeping history of the “short” twentieth century, tracking global political and economic trends from post-WWII to the very recent past. Mason offers the volume as a coda to Eric Hobsbawm’s The Age of Extremes, drawing out themes that have arisen in the political arena in the more than twenty-five years since (Hobsbawm’s analysis spans 1914-1991). He argues that developments during this time –9/11 and America’s series of protracted foreign interventions; the spectral, lurking threat of terrorism; the acceleration of Asian markets; Brexit and the potential disintegration of the European Union; and the economic shake-ups of 2008 – call for a shift toward viewing Southeast Asia rather than Europe and America as the driver of global capitalism’s future.

Turbulent Empires seems to have been written for the textbook market, featuring chapter introductions that address readers unfamiliar with, say, the revolutions that hatched the USSR. Mason writes clearly and well, situating his analyses in longer histories of colonialism and the circulation of ideological movements such as communism and politicized radical Islam. He deploys Hobsbawm’s technique of drawing from vast pools of seemingly unrelated statistical data to show trends that produce a macro-level view of his period. 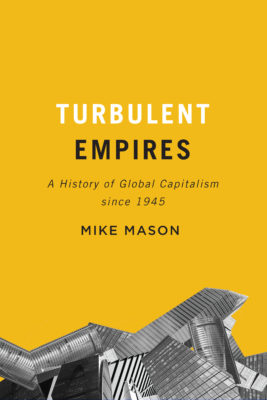 Turbulent Empires
A History of Global Capitalism since 1945
Mike Mason

A global contemporary history is necessarily painted in broad strokes. The book is structured into chapters that cover a loose geographical cluster of nation-states. In each, Mason sketches out what’s at stake in the region and zooms in on a few key countries – Brazil and Argentina for Latin America, or Germany and the UK in Europe. China, Russia, and America are each given their own dedicated chapters.

Along with his analysis of the more dominant states muscling for supremacy, Mason also traces the struggles of postcolonial nations to achieve functional sovereignty (and, inevitably, the antics of wealthier countries messing around therein). His attention to Ghana and the Congo, placed toward the end of the book, frames how these often-forgotten states continue to serve as both unwitting benefactors of and theatres for wealthier nations’ games of strategy and control.

The downside to Mason’s expansive but compressed approach is a tendency toward crisply drawn conclusions that reduce the complexity of the events he’s worked so hard to contextualize elsewhere. Moreover, it leads to some bizarre exclusions – Israel, for example, is scarcely mentioned as a player in global power politics (which could also conceivably be a way to make the volume a classroom-safe textbook – there’s almost nothing that anyone can say about Israeli politics that won’t raise somebody’s ire).

While Turbulent Empires’ scope is international and Mason doesn’t delve into Canada’s geopolitical situation at any length, he does comment on the nation’s military and aid engagements in other regions. Mason has a distinctly Canadian mild bitterness toward American sabre-rattling and swagger, and the text is clearly written from the perspective of a Canadian looking outat the world.

It doesn’t necessarily attain the Hobsbawmian heights of analysis it aspires to, but Turbulent Empires does step up to the challenge of writing history as it’s happening. It’s well researched and very contemporary, referencing events through 2017, and Mason paints a well-defined portrait of the world today and the roles of specific nations in creating it. At once erudite and pleasant- ly readable, it’s the kind of broad international perspective that pretty much anyone should consume before reading or forming opinions on what’s happening in world news. mRb