A review of My Dirty Dumb Eyes. by Lisa Hanawalt

Lisa Hanawalt has been publishing her drawings, illustrations, and short comics in such places as The New York Times, The Believer, and Lucky Peach, as well as on a number of websites and in her own zines and mini-comics for several years now, and her bright colours and bizarre imagination are always a welcome jolt to both eyeballs and decorum. My Dirty Dumb Eyes – the title is especially apt – is her first and much-hyped book-length collection, and your enjoyment of it will depend on your patience and tolerance for such things as penis jokes, stool charts, weird sex-fetishes, dad-joke wordplay, and countless drawings of animals with hats, all served up by an absurd and resolutely unambitious imagination that revels in silliness for its own sake. 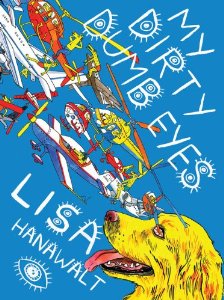 Not that there’s anything wrong with that. Hanawalt’s particular talent is a light and innocently playful touch that can deflate the perceived importance or pomposity of anything it touches, such as in her series of satiric drawings about Anna Wintour, which depict the allegedly fearsome Vogue editor displaying affection by holding a dead mouse in her mouth and hating herself for shopping at Forever 21. Another highlight of the collection is Hanawalt’s movie reviews, written in humorous and tweet-ready bullet points and accompanied by drawings of such popular culture icons as Ryan Gosling’s character from Drive, his car replaced by a skateboard and his shoulder embellished with a “cool parrot.” Funnier still is Hanawalt’s “Tips for Living with a Significant Other,” which parodies relationship self-help articles (or, more precisely, listicles) by giving such advice as “prepare for the statistical likelihood of breaking up by labelling your possessions ahead of time.” Jokes such as these work because they filter pop culture ephemera through Hanawalt’s imagination and serve them up in small doses and in a form suitable for the short attention spans of magazine reading or casual web browsing.

In the context of an entire book, however, the jokes eventually begin to seem both stale and repetitive, and the countless non-narrative drawings, although both beautiful and technically superb, often seem rather pointless, however funny the initial idea of rendering Jeff Goldblum as a dinosaur or drawing the time machine from Back to the Future surrounded by lizards might have been. Overall, Hanawalt is at her best when she experiments with narrative, such as in her long, funny, and ultimately rather profound reportage from her visit to a New York City toy fair under the guise of being a chia seed company employee. Despite a lack of a coherent vision or organizing principle, what ultimately makes the collection as it stands worthwhile is Hanawalt’s almost old-school comedian’s willingness to try anything for a laugh: Don’t like jokes about sticking your dick in water lilies? How about a strip depicting a psychotherapist with a pancake for a head or a drawing of a woman with a hotdog in her vagina? You like animals with funny hats, you say? Well, here are more drawings of them than you will ever need, and most of them are very pretty. On the often hilarious but also disappointingly one-note evidence of My Dirty Dumb Eyes, Hanawalt is a singular visual talent and a promising humourist, and it will be interesting to see what she does once she graduates from drawing dick lizards.

Frederik Byrn Køhlert is a doctoral candidate at the University of Montreal who studies and writes about comics. He has written academically about Montreal comics artist Julie Doucet and is also the author of The Chicago Literary Experience: Writing the City, 1893-1953.