A review of RoomsShip of Gold by Louise DupréÉmile Nelligan

Émile Nelligan’s tale is a tragic one. Born in Montreal in 1879, he shone briefly as an innovative French Canadian poet of his time, before he suffered a major mental breakdown and was institutionalized for the rest of his life at the unseasonable age of nineteen. A poet in his own right, Marc Di Saverio has translated a selection of Nelligan’s poems and presents them within a more contemporary discourse of mental health, situating Nelligan as a ground-breaking creative mind, “one of the first poets to write openly about suicide, neurosis, and psychological breakdown.” Di Saverio’s afterword (haplessly lacking in copy-editing) successfully contextualizes Nelligan’s life and outlines the personal relevance of these poems for him – Di Saverio’s father also loves these poems, and father and son collaborated on and discussed the direction the translation would take. Considering this personal motivation, Ship of Gold reads very much as Di Saverio’s Nelligan, a translation driven by self-identification and a level of admiration akin to inspiration. 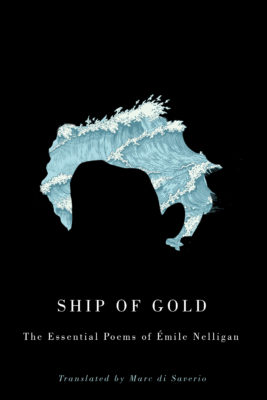 Reading Nelligan’s work today may seem anachronistic. A poem entitled “A Poet’s Dream,” for example, wishes for a muse, a meek female support, beautiful by default, but “with the shyest smile … always waiting” to offer moral strength to the male artist. Some poems – often sonnets – harness descriptions of nature, elevated in the final turn to emotional resonance or psychological struggle. In the present day, this conceit hardly seems original: “Here is a tulip and there are the roses … inside a park where love plays under trees … mourning memories of my bathing soul.” Nelligan’s poems are historical documents. Readers versed in contemporary poetry and theory might find Ship of Gold archaic, overly dependent on standard representations of beauty and stock images of innocence to bolster the affective morbidity of much of the content. Readers who already love Nelligan’s work, however, will be delighted with Di Saverio’s formally well-wrought, energetic, and musical new translations.

The languorous sensuality of Louise Dupré’s Rooms – here gorgeously translated from the original French by Karen Isabel Ocaña – provides an introspective, meditative reading experience, absorbing the reader into the misleading simplicity of profound perceptiveness. The book is divided into a series of long prose poems – or rooms, with titles such as “First Antechamber,” “Tourist Room,” and “Colour Room” – each with smaller, often numbered, subsections. Occasionally, a poem concludes with a black rectangle, reversing the standard black print on white paper to white words on black; these rectangles function as formal visualizations of rooms, also including the only instances in this book of lineated poetry, a slackening of justified paragraphs into verse, a letting go, a seduction into poetry: “on black ground words / expose themselves.” 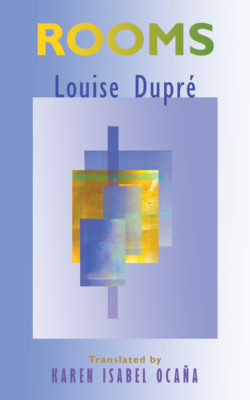 Besides the physical sensuality of these poems – the calm presentation of pleasure, the nuanced descriptions of sex, the concentration on bits and pieces of body parts one doesn’t often consider in everyday life – the sense of sight, in particular, is heightened throughout. Characters access memories by looking at photographs; they enlarge images to capture more detail – “one by one the details, one by one.” They are artists themselves, and so language becomes a vehicle with which to depict the visual, vibrant cosmos they inhabit. Apropos, one is reminded of the fact that the word “camera” evolved from the Latin word for “room,” that the Rooms of this book are the container for a photographic eye to roam, focus, and capture experience for posterity.

Finally, it is with an empowering attentiveness that the characters in these poems allow themselves to perceive their own lives and to engage with their desires; these are women suffused with self-love and the drive towards self-care and creativity. Tragically, this is as much a radical statement today as it was in 1986 when Dupré’s Chambres first appeared. mRb