In Louise Carson’s Measured, the second in her Chronicles of Deasil Widdy series, tight evocative writing moves seamlessly between bucolic eighteenth-century Scottish landscapes and intermittent scenes of violence and destruction.

Something of a loner, the brave protagonist Deasil is on a meditative journey, ultimately to a home he doesn’t remember, looking for a family he has never known. 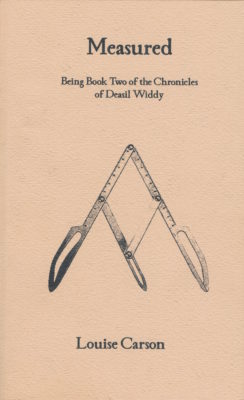 It’s also a journey to reckon with his supernatural visions. He’s advised by Margaret, a Traveller he journeys with at one point, to learn “what spirits to greet and what others to avoid.” Making his way around Scotland, he meets and travels with a range of characters, most neither good nor evil, but a mix of both. Deasil comes to realize that while he’s not fully guilty of certain violent actions in his past, he’s not innocent either.

Deasil helps those he can, like the simple but kind shepherd he lives with for a while. There are repeated examples of a bygone hospitality that is less economic, less of an exchange. Reflecting the time and place, encounters and relations between people are both harsher and more generous.

This wandering story is told in a deeply soothing way. All Deasil has is the present – barely any belongings, almost no security. And still, he finds moments of rest: “Deasil relaxed. He was not responsible for any task on this ship. He was a floating passenger. His past actions and uncertain future diminished equally, and he was just an animal, content to snuff the fresh sea air, feel salt spray lightly on his face.”

Norwood Quigley, the protagonist of MJ Lyons’s Murder at the World’s Fair, is on a very different journey, but equally one of self-discovery.

It’s 1893, and “the sky above Toronto is daily filled with oblong silhouettes,” known as airships. The city is hosting a World Exhibition.

In Lyons’s novel, book one in an upcoming series, the Teston & Tinker workshop is behind this airship revolution. It also has many other inventions, from steam-powered streetcars run by mechanical men (who also tidy the city’s streets) to the adorable and ultimately useful cat, Tickertape, and the Robocop- esque Mr. Shackles.

That one of the workshop’s two lead inventors is a woman is not a surprise. Lyons purposefully creates – and celebrates – a diverse world, where, although there are instances of sexism, homophobia, and racism, there are also different cultures, orientations, and ways of life. 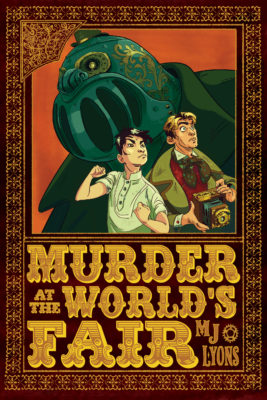 The tale is told by Norwood Quigley, the artistic son of an airship magnate. Norwood’s partner in the adventure is Jing, a talented and street-smart Chinese-Canadian orphan (and sometimes prostitute), who is otherwise pretty much alone in the world. The two find themselves at the centre of political intrigue that takes them all around the Toronto area by pretty much every means of transportation.

While finding first love and a budding career, Norwood must also accept that corruption and greed are closer to home than he ever imagined – indeed, they are woven into his very life.

Lyons writes scenes with real tension and energetic pacing that include genuinely surprising plot twists. It’s a fun, if at times stressful, romp, but it also feels like a vision for a better world. If technology has so far failed to fix today’s broken planet, Lyons presents a version of the past full of hope. Though greed, corruption, and prejudice are still forces to be reckoned with, there is also technological and social revolution. mRb