A review of Under the Stone by Karoline Georges

In a world devoid of affection, the word “gentleness” reverberates like a blow to the head when it materializes suddenly in the final pages of Karoline Georges’s novel Under the Stone – newly translated into English by Jacob Homel. “I had never imagined such… gentleness,” writes Georges, leading up to the unexpected tenderness with the emphasis of ellipses, a break in syntax that isolates kindness to a mental space far removed from comprehension. This is a typical post-apocalyptic world. People live in identical concrete cubicles in an infinitely large Tower. They are monitored, surveilled, fed abstracted “nutrients,” and drugged with “numbing agent.” They are trained to accept their conditions categorically, “to crush all questions, all intentions, all thoughts.” Fear and pain reign.

The unnamed narrator is a child, the son of murderous parents, an abusive father and an impassive mother wracked by anxiety of aging and eviction. In quick succession, the mother strangles the little sister; the father drowns another sister in the toilet bowl, wraps and suffocates two brothers in plastic and disposes of them in the trash chute. The extremity of physical and sexual abuse, described repeatedly throughout the book, is hard to read at times. Assault is normalized, never critiqued, just blandly stated as a predominant facet of life. “Kicks, punches. His feet stomping on my stomach, my head, my heart. I absorbed the blows, took the shape dictated by his feet, by his large open hands.” Again, “he would drag me into the lavatory, hide me from the security system behind his suddenly immense presence and promptly deposit his soil on me.” The father aims to beat an understanding of the primacy of physicality into the child. “The sensation of having an interior is a residue, a barbaric mental anomaly” and the pragmatic functioning of the body is the only consequential factor of existence. 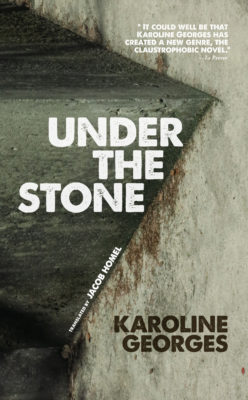 Under the Stone
Karoline Georges
Translated by Jacob Homel

The philosophy behind Georges’s dystopia pivots on the refrain “Total Concrete.” While concrete refers to the supposedly indestructible quality of the material used to construct the Tower, it can also be interpreted as solid, physical form, in opposition to a more abstract, metaphysical state. Of course, it is exactly by way of mental activity that the child is eventually able to break free of his nightmarish existence. The moment that he becomes critical of the existing state of affairs, he is able to distinguish himself from the status quo and articulate the smallest word of resistance: “Why?”

Transfigured into consciousness without a body, the child is then able to transcend the Tower, experience the world beyond, and engage in pseudo-theoretical words of wisdom with a deity. In contrast to the steady, if claustrophobic, majority of the narrative, the child’s transformation, emancipation, and adventures happen very quickly and without much detail. Although Georges feigns to explain the sequence of events, these clarifications seem contrived and deliberately obscure. “You are exactly in You.” “The fundamental vibration of energy.” “A thread intrinsic to every body, hidden in the heart of each one’s molecules.” Uncompromisingly pessimistic, Georges portrays existence as a repetitive cycle of suffering. The slight variations between one life story and the next are negligible and can easily be simplified to a narrative of imprisonment, whether in the Tower, in the body, or in the mind.

Although thematically this novel is not a relaxing read, it is beautifully written in short, sparse sections that cumulatively build toward a horrendous, yet engaging, alternate reality. Homel’s translation progresses fluidly so that the language never distracts from the narrative, but rather lodges the reader deeper and deeper Under the Stone. mRb