Not Just a One-Trick Pony

A review of Vigilante Season by Peter Kirby

Inspector Luc Vanier and his partner Detective Sergeant Sylvie Saint-Jacques make their second appearance in Peter Kirby’s Vigilante Season, and once again they’re taking on a wide range of opponents, some in the Establishment, some die-hard villains, and some in their own backyard, the Montreal Urban Police.

In Hochelaga, a neglected neighbourhood in east Montreal, a minor drug dealer is found one night in the middle of the street, bludgeoned to death. Few people seem to give a damn: the verdict is that it’s a drug deal gone wrong. But the victim, Émile Legault, had been tortured, one of his fingers amputated, and the very next day a clean-up crew is already busy renovating his apartment. Not business as usual in a petty drug deal. Intrigued, Luc Vanier visits the landlord, Colonel Montpetit, head of a self-styled paramilitary group, the Patriotes, that is trying to clean up Hochelaga. Montpetit is not overly concerned: in his view a crack house in the neighbourhood is not an asset, and Legault is scum to be driven out.

On the face of it, the Patriotes fill an important void in the district. Employing some eighty people and operating everything from local pre-school programs to employment centres to food banks and a summer camp, they are widely popular in an area mostly neglected by city authorities. But Vanier spots another, darker side to the organization: on the Colonel’s wall is a photo of men parading through the streets in uniform and armed with guns. Are they harmless nuts playing at soldiers or dangerous adversaries and a rival government vying for political power? 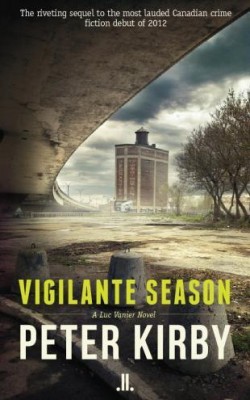 When Vanier’s partner notices a street kid outside Montpetit’s office slashing his tires the detective gives chase. The kid eludes him, but Vanier tracks him down and busts him for vandalism. Before long Colonel Montpetit makes the issue a cause célébre, portraying the punk as an innocent victim and orchestrating a march on the station where he’s being held. When the demonstration turns ugly and cars are torched the boy is released, but he turns up at a local hospital soon afterwards, with injuries he blames on Vanier. Suddenly Vanier and his partner, Sylvie Saint-Jacques, find themselves on the defensive, relieved of duties and ordered to stay strictly away from the investigation. It seems Montpetit and his militia have effectively taken over the neighbourhood. So begins a cat-and-mouse game between Vanier and Montpetit. Little does Vanier realize that he’s only scratched the surface of the troubled neighbourhood.

When Peter Kirby made his debut with The Dead of Winter some eighteen months ago, I was impressed by the strength of the writing coming from the pen of an unknown author. His second novel does not disappoint. His writing has become even more assured, and his ability to capture the atmosphere of various districts of Montreal in all their glory or squalor, coupled with a believable storyline drawn from the headlines, lends his books an immediacy that will keep the reader enthralled.

If I have any quarrel with Kirby’s latest work, it is that Vanier’s subordinate, Detective Sergeant Sylvie Saint-Jacques, seems to be largely along for the ride. As the tale gathers steam and moves toward its taut climax, Saint-Jacques is relegated to a minor role exercised from the boondocks of Tremblant. There are only so many characters that an author can explore in a single novel, of course, and Vanier, his troubled son Alex, and his lover Anjili are dealt with compassionately and in some depth; it would be nice to see Saint-Jacques come in for some of the same in Kirby’s next tale. That said, Vigilante Season is a fine tale that can hold its own with the best of what’s out there, and I look forward to the next instalment in this engaging series.

Jim Napier’s reviews have appeared in several Canadian newspapers and on his own award-winning website, Deadly Diversions.