A review of Vita by Susan E. Lloy

The stories in Vita, Susan E. Lloy’s second collection, are imperfect; in this book, that might be the point. “My thoughts and memories are scattered like fallen berries,” the titular character of “Layla was Here” writes in her journal – loose sheets of paper discovered by the new tenant of her former Mile End apartment – “some in perfect form, others distorted.” Like Layla’s journal entries, these short intense narratives – ranging in length from less than a page to just under thirty – are heavy with nostalgia and oneiric emotion.

Rebecca Morris called Lloy’s first collection, But When We Look Closer, “a literary version of film noir.” The comparison remains apt; like film noir, the stories in Vita often incorporate flashbacks and dream sequences, fatalistic protagonists, and strong emotions mixed with moral ambiguity. Lloy herself draws a comparison between memory and film in the first few sentences of the book: “They say when you’re going to die your life flashes before you, yet this isn’t quite so,” a retired photojournalist tells us in the title story. At the end of his life, sick and confined to his home, surrounded by this work, he descends into dreams “laced with memories,” with the assistance of drugs. Rather, he says, it’s like a film, “reedited from scraps on the floor and put back together with the plot and characters all mixed up in one last fusion.” 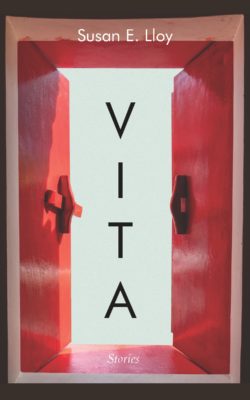 Many of the characters in Vita move, with cinematic quick cuts and short takes, between recollection and reality. In “That Screaming Silence” and “Sailor’s Rest,” the female protagonists seek to settle in small towns on the Atlantic coast. Neither find the retirement they imagined, and both struggle to reconcile the future they had envisioned with the present now at hand. In “The Little Bang,” a woman anticipates a reunion with an old lover, “wonder[ing] what shared memories we held close and what had been abandoned.” Travelled time “only retains slivers of importance,” she tells us, admitting that “fundamental fragments of knowledge have vanished from [her] mind.”

Although Lloy’s stories share a cinematic atmosphere, the collection as a whole is uneven. The strongest do more than create a mood; they depict complex characters capable of surprising. When a fallen tree breaks through the side of her newly purchased seaside cottage, obliterating all of her savings and long-held dreams of a peaceful coastal retirement, the narrator in “Sailor’s Rest” decides to take on two roommates: a local fisherman, and her old city neighbour and friend. The oddly matched trio not only live well together – they wind up sharing a happy, polyamorous cohabitation. But others contain prose that pauses rather than propels the narrative – at times I found myself reading and rereading a sentence until I could pin down the cause of my uneasiness. Sometimes it was unrhythmic syntax, or a turn of phrase that didn’t quite work (“the only thing he was capable of respecting was a cold beer or a willing slut”). Other times the dialogue felt strained, with characters addressing one another by name every other sentence, engaging in an unnatural back and forth.

As many of the characters reiterate throughout the book, memory is flawed. “Perhaps your mental diary isn’t as sharp as it once was,” the estranged lover teases in “The Little Bang.” But even an imperfect memory has the power to evoke all-too-real emotions: “Some of these souls seem so far from me now and have drifted from my life and thoughts,” the protagonist of “Sailor’s Rest” says as she considers which framed photographs to hang in her new home. “But when I pick one up I feel the caress of their hand, the whisper of their words.” Shuffling through the brief snapshot of each story, I was swept up in the intense nostalgia Lloy is adept at conveying. Much like an experienced memory, after reading the stories in Vita, I was left with jumbled flashes of detail – vivid descriptions, lucid settings, and striking thoughts – and a pervasive, palpable sense of remembered emotion. mRb

Quinn Mason’s writing has appeared in Lemon Hound, Cosmonauts Avenue, Maisonneuve, and Michelin guidebooks. You can find more of her work at quinnamason.com.