Waiting for the Man

A review of Waiting for the Man by Arjun Basu

Joe is an average Joe. New Yorker, mid-thirties. Works for an ad agency, good at his job. He one time branded a beer so brandfully, he more or less invented it. He’s well-surrounded (“I drank with the right people,” he cracks ironically). And when Joe cracks for reals, he does so ironically. Welcome to Waiting for the Man.

Arjun Basu’s second book hinges on the same in-betweenness as did many of the stories in his 2008 debut collection Squishy (DC Books). When Joe, disillusioned and lacking more promising options, begins to experience visions, he obeys his hallucinations’ instructions. “The Man,” who stars in these dreams, is a thin black fellow in seventies pimpwear with “a smile you couldn’t outrun.” Wait, he tells Joe, so Joe sits on his front steps and waits for the Man. After two days on his stoop, Joe has an entourage. Women begin to bring him Tupperware containers. A week into his loitering pilgrimage, Joe accidentally acquires a press attaché, Dan-from-the-Post, who secures a pizza sponsorship and eventually wrangles Joe’s cross-country odyssey, media bus in tow. The police close the street, food carts pop up, groupies arrive.

“Wanting to become famous used to be an aspiration and now it’s a career.” 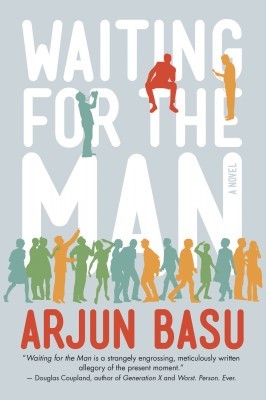 Waiting for the Man
Arjun Basu

As if someone can struggle with their visions without a camera crew and a blog! Certainly not in New York; not in the twenty-first century. The quest story is timeless, but Waiting for the Man is a novel of its time. The quest narrative today has more possibilities than ever, untethered from didactic or moral imperatives, with almost endless socioeconomic strata to escape into and from. But Joe’s mission exposes the peculiarities of contemporary spiritual awakenings: the modern quester is ever aware of the spiralling pileup in his inbox; before the cameras, the quester makes sure to shave. “Who wants to share their most intimate forms of lunacy,” Joe asks, but the reader doesn’t empathize as much as watch the passing news unfold (which leads to some weaker expository passages in an otherwise well-styled book). Joe can’t even emerge from a rest-stop bathroom without having to give a press conference, but the paradox is that no one – not the canny Dan, not the Japanese hitchhiker Joe picks up, not the wise and lovely one-who-got-away Angie – really gets it, or tries to.

This layer of conscious performance undermines the protagonist’s loneliness, which would seem fundamental to the genre: Joe is never not surrounded and contextualized. As a consequence, Basu’s reader becomes just another spectator in the crowd – a lonely place, from which one might start having visions, obeying imagined pleas.

“The joy of being ignored was a joy I had never even imagined.”

Basu’s narrative unfolds in two directions, finally converging at the end of the cross- country trip and the beginning of the rest of Joe’s life. In alternating chapters, Basu gives us Joe in the future, working a menial kitchen job at a chic resort in Montana, having evaded the lies he told himself to get through life. He relishes this new anonymity, but still struggles against the media machine that employed him and made him famous. You can come from anywhere, you can go anywhere, but in the end you’ll always come back to yourself.

This is how we quest – we, Generation Something. This is how we live our mal de siècle, midlife crisis; mal de whatever. Waiting for the Man is observant and clever, and doesn’t take itself too seriously. Basu toys with his readers, pushing us away to point out the distance at which we hold the characters and stories that populate our pages and screens, and reminds us there is always more to the story. mRb