A review of Walmart by Hugo Meunier

Hating on Walmart is both easy and fun. But considering the juggernaut’s size, market-defining impact, and workforce, taking cheap shots isn’t giving the retail giant and its two million-plus employees the seriousness they deserve.

In his introduction to Walmart: Diary of an Associate, Hugo Meunier draws a parallel between General Motors in the 1950s and Walmart today. The two companies’ scale, prominence, and market share are comparable – GM then and Walmart now enjoy revenues between 2.5 and 3 percent of the US gross national product (!) and are widely viewed as the paradigmatic businesses of their times. But GM offered its workers lifelong jobs with middle-class wages, famously paying machinists enough so that they could afford to buy the automobiles they worked on. And Walmart outsources, undercuts, and union busts, infamously paying their personnel so little that they can’t afford to shop anywhere else.

Meunier wrote this slim volume after working full-time at an outlet in Saint-Leonard for three months in 2012. He was also, significantly, simultaneously employed as a journalist at La Presse. (He donated his Walmart earnings to local charities.) Meunier prides himself on being an undercover guy, a muckraker who also infiltrated Justin Trudeau’s wedding, a Laval homeless shelter, and the local swingers scene. He walks readers through the chain’s hiring process, tedious training modules, cringe-worthy pre-shift chant, and the grim day-to-day monotony of moving and “facing” product while cheerily greeting every customer within three metres. 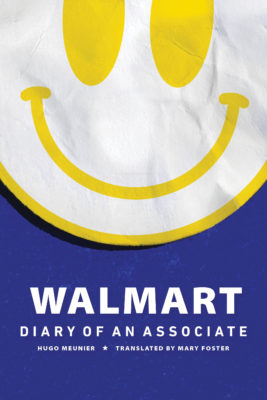 The journalist/academic/overqualified intellectual who takes a service job and writes a mildly politicized memoir about it has become a genre unto itself. Walmart’s well-publicized crappy labour practices and hokey bluster make it an obvious choice for this kind of project (Barbara Ehrenreich also worked at Walmart for 2001’s Nickel and Dimed, the gold standard of real-work-sucks literature).

But over the course of his story, we watch Meunier’s transformation, from a scoffing, critical outsider into, well, an employee. He still kvetches about the job – administrative snafus and sore feet and insufferable customers – but he also worries about his product deliveries and who’s been stacking the pallets wrong out back. He sniffs at lazy part-timers and glows when a manager recognizes his hustle. At one point, he’s called away to Mexico following a journalistic lead, where he fastidiously avoids getting a tan so the frozen foods department head won’t know that he lied about why he needed time off. In short, rather than keeping the detachment one expects from someone knowingly working a story, drawing a fat paycheque elsewhere all the while, he is well and truly in it.

Meunier is less interested in the community impact narratives that swirl around Walmart – its pressure on suppliers, small businesses, and downtowns. He stays focused on how workers are pinched between the chain’s delirious customer-centricity and management’s almost whimsical agendas for boosting profit margins. He imagines the stress of making it on $88 a day and watches his co-workers scrabble for in-store discount coupons to buy Christmas gifts. After work, he meets with the leaders of Walmart’s only successful union drive to date, at a Jonquière outlet that was immediately shut down, and travels to Bentonville, Arkansas, the spiritual birthplace of the aw-shucks Walmart spirit.

Working this heavy subject matter, he keeps the tone light, with probably more self-deprecating hangover jokes than anyone needs. But Meunier’s account is touching in the way it reveals, even within an exposé, how much these jobs get inside us – how we become the kinds of workers we’re told we are. And that’s the real scoop. mRb