A review of We Still Here by Edited by Charity Marsh and Mark V. Campbell

Until relatively recent history, Canada’s relationship to international pop culture celebrity status has usually been at odds with itself. There was, traditionally, a certain superficial “aw-shucks” timidity, coupled with a strong- willed opposition to our identity being lumped together with that of our neighbours to the south, and further complicated by a sense of self-satisfied glee when our talent was occasionally noticed internationally.

All of this has gone double for hip hop. But there’s a difference between hip hop as a global pop phenomenon and hip hop, the grassroots, artistic, and political culture.

As the editors and essay contributors of We Still Here: Hip Hop North of the 49th Parallel well understand, identity in terms of hip hop in Canada – and not, as is pointed out early in the book, “Canadian hip hop” – has everything to do with the diaspora of cultures across the nation’s provinces and cities, and very little to do with social legitimacy and bankability, traits which have defined hip hop’s market status in the United States for decades.

Indigenous voices, immigrant stories, linguistic diversity, gender, and generational divides are at the forefront of this exploration of hip hop’s evolution as a medium both of expression and entertainment in Canada since the mid-1980s, a period in hip hop history dominated largely by what was happening in New York and LA. 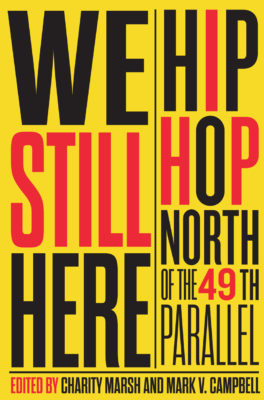 Hip hop as a commodity is as American as Chrysler, McDonald’s, or Dell computers, a late-twentieth-century vestige of the American Dream. This text never strays too far from the artist experience, reinforcing that Canada has no such grandeur in terms of a homegrown model of capitalist industry. For hip hop to achieve and, today, maintain agency here, it has relied instead on the force of its DIY nature and inherent sense of community orientation – characteristics at the root of the original NYC street movement – to slowly grow and evolve here, not as one common entity but with a shared, common understanding of its ideological power.

Presented in three parts, each with an array of contributions by essayists, historians, interviewers, and academics, We Still Here categorizes “loose knowledge” of hip hop in Canada in terms of archiving, representation, and potential.

At times, it reads more as a historical document; in other places, a confidential. Of particular interest to me as a reader was the section on Quebec’s more recent history in the game, “Post-Nationalist Hip Hop: Beat Making and the Emergence of the Piu Piu Scene,” by Alexandrine Boudreault-Fournier and Laurent K. Blais – the former an academic, the latter a veteran journalist. As anthropological research on a movement I have myself documented from a more traditional entertainment-reporting standpoint, it was especially satisfying.

Considerable effort has also been made to prevent the sum of its parts from being too Toronto-centric. While entire tomes could be devoted to the city’s rich rap history, cities such as Halifax and Winnipeg have arguably done more to help shape and proliferate open, inclusive, and stylistically diverse niches for artists and activists of every stripe so that they can find a welcome space in the culture at large.

That said, We Still Here is hardly definitive, nor does it assert itself to be. As a first collection of its kind, it does a fine job of assembling academically astute record-keeping of the places, names, and subjects it chronicles, and has the added benefit of letting the reader decide which subjects may be of greater interest. If at times individual contributors seem to flounder under the weight of subjectivity of their chosen topics, each can be said to have delivered with expert conviction and informed analysis.

If you find all of the understanding you need in beats and rhymes, you’d perhaps be better served in your discovery by Bandcamp algorithms for Canadian artists. But if you’re the type of hip hop fan who views knowledge as the fifth element, this book is absolutely for you. mRb