A review of Wet Dream by Erin Robinsong

The word “brain” appears twenty-six times in Erin Robinsong’s new collection, Wet Dream (this is not counting the word “mind” and other possible synonyms). The “brain sun,” the “wet electric brain” is a “[l]eakage of brains,” “[d]eep into [the speaker’s] brains.”

My brain floating in juice it produces 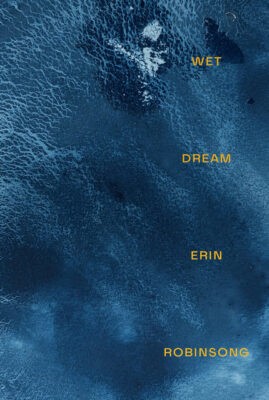 This is a collection that contracts into the everyday delights and difficulties equally as it expands towards the universal. Its thesis is an interconnected existence of reciprocity that allows the mind’s astuteness and delicacy to flourish and flow in relation to everything else, on all scales. As Robinsong suggests:

[…] Water is the transportation

This thematization of liquid entanglement and intelligence is reflected stylistically, with long run-on sentences that often blend any methodical separation of subject and object. Take the following lines, for example:

To the light eating

Out of heat, green of fire, peaches

Of shit, speech out of wind,

This pileup of language groans with affect. Who is doing, and to whom actions are being done, dissolve as the in-between space of touch, seepage, and integration sustain the vibratory vibrancy of these poems. This book is more than the Wet Dream of its title, however. Yes, there is an erotic surge that moistens and interconnects the world as an ecosystem of poetry, but this collection never fades into reverie. It is as real as “[t]he wet mind of reality” in its articulation of the climate crisis and its consequences, in its incisive formulation of care towards the environment and the self, and in its coherence as a published project. Robinsong spreads “wet intelligence” like musk over every image, statement, and experience that she shares, sensuously, fervently present in the now of poetry.mRb