What Animals Teach Us About Politics

For its complexity, rigour, and insight, Brian Massumi’s work tends to engender sheepish admiration from grad students and scholars alike. His name is ubiquitous in several branches of the academy – among them philosophy, communication studies, and affect theory. Although his influence within the humanities runs deep, he’s not read with anything near the same enthusiasm outside. His work is dense, self-referential, and erudite; his most recent book, What Animals Teach Us about Politics, is no exception.

Here, Massumi’s main intervention is to reveal how the field of politics has been limited by a conception of humanity as distinct from and better than other forms of life; how a belief that humans are a discrete category, uniquely capable of reason and insight, forecloses ways of thinking that exist or originate outside of human consciousness. To put it another way, humans exercise a detrimental vanity in assuming that only we are capable of “language, thought and creativity.” The problem is not only that we humans think of ourselves as smarter than any other living thing, but also that we consider ourselves to be of a different order of existence. For Massumi, this vanity has blinded us to the philosophical and political possibilities that exist outside of our impoverished understanding of what is and isn’t human. In order to escape this myopia, Massumi turns to animals to illustrate some of the resources that are available when we become aware of the limitations imposed by a rigid conception of what humans are and how we do what we do. 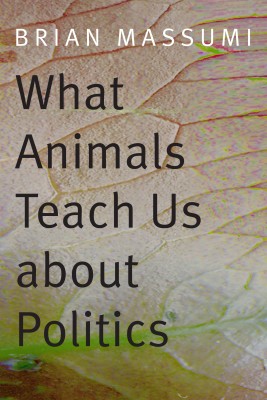 What Animals Teach Us About Politics
Brian Massumi

Imagining two wolf cubs in a play fight, he dissects what happens in the action of the one lightly nipping the other. The nip is complex because it is a playful gesture that is inseparable from what it seems to be imitating: a bite. Massumi’s bet is that presumably limited human understanding, especially as it plays out in politics, cannot do justice to this paradox: that the playfulness of the nip is always imbued with the aggression of combat that would otherwise motivate a more ferocious bite.

Massumi analyzes the slip between the playful gesture and its aggressive correlate, between the nip and the bite, for everything it’s worth. Bite and nip are not simply in opposition, nor are they the same thing. The nip can become a bite if one cub gets carried away… just as the whole interaction can dissolve if playfulness is rid of its contingent aggression. Massumi calls this relationship “mutual inclusion” which in turn becomes the basis for his theorizing about what animal politics might look like.

The essence of Massumi’s argument is contained within an extended essay, which is then followed by three supplements that elaborate some key concerns. The format produces a concise text without sacrificing any profundity.

The book is a substantial contribution to an already advanced conversation. As such, those interested in Massumi’s thought might be better initiated with his 1995 essay “The Autonomy of Affect,” a founding text for the humanities’ resurgent interest in affect and emotion, or even his book Parables of the Virtual: Movement, Affect, Sensation, which this newest work builds upon. For those ready and willing to navigate the complexity of What Animals Teach Us about Politics, Massumi is a brilliant thinker who has produced another incisive critique that is likely to elicit interesting scholarship and responses, both from his immediate interlocutors and anyone else looking for a way out of humanity. mRb

Liam Mayes is a Montrealer in absentia, working on a PhD in Rhetoric and Public Culture at Northwestern University in Chicago.