The Locus of Imagination

What It Means to Write

A review of What It Means to Write by Adrian McKerracher

What is creativity, and how does it work? Is creativity something that one has or one does? Adrian McKerracher’s What it Means to Write: Creativity and Metaphor is a layered meditation on how metaphors for creativity respond to these kinds of questions, even as they strive to express them.

The book is a strange beast, a stylistic hybrid that’s initially coy about its ambitions. It fuses autobiographical fragments, annotated interviews, and philosophical breaks in an experimental format that performatively enacts the kind of analysis it advocates. It begins with a standard travelogue, following the author to Havana and Buenos Aires in search of that elusive figure, the writer, in their natural habitat — cool cities.

As this flâneur’s travel narrative progresses, it begins to give way to a secondary layer, in which McKerracher interrogates the different ways that creativity is described using metaphorical language. He draws concentric circles between these touchstone preoccupations — metaphor, creativity, writing, learning a language, discovering a city — with each leading fluidly to the next. He considers a wealth of well-used concepts of creativity (as evolution, as divergence, as play) before casting each aside as valuable but not fully adequate. 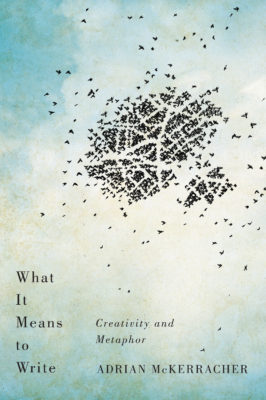 What It Means to Write
Creativity and Metaphor
Adrian McKerracher

A break near the book’s midpoint creates a transitional hinge in which McKerracher distills his philosophy for the project and its pairing of personal narratives with allegorical semantics. “I wanted to use metaphor as a verb,” he explains. Metaphorical thinking is “a way of considering the dynamic tension between language and experience. By living and ‘languaging,’ one brought the stuff of life into words.” This thinking, heavily indebted to Derrida, structures his approach for the rest of the text as he tries to put critical theory into action, to verb it.

McKerracher juxtaposes short vignettes about his passages through Buenos Aires with excerpts from four interviews, each with an artist who sees their relationship to creative work in a certain light. These transcripts are placed as a body text with marginalia glossing the metaphors each interviewee deploys, à la Roland Barthes’s A Lover’s Discourse: Fragments. The first-person storytelling segments that frame the interviews unspool some of the metaphors for art and creativity he encounters in his research — as dreams, as journeys, as relationships.

McKerracher closes What it Means to Write with an afterward about his methodology. Here, he defines what he calls “critical metaphor literacy,” a technique of writing or narrativizing experience in order to expose the metaphors we use to understand it, if only ever partially. He wants to explore the lived experience of metaphors alongside the language that tries but inevitably fails to express it. This end-of-book revelation arrives a bit late, and the link between the interview series and his own travels wasn’t always immediately clear in the main text. This tactic risks casting what came before into doubt, as the autobiographical narrator’s earnestness and vulnerability is suddenly called into question as a potential construct or theoretical exercise. His objective, he explains, was to lead his readers to spot and untangle metaphorical patterns on their own; however, knowing more about his approach earlier might have helped his audience to better appreciate the process. That said, his prose is clear and accessible throughout, and he’s an entirely likeable and insightful character as he examines his own relationship with language and the tricky business of using this faulty tool to forge connections with others.

In a book that sets out to consider the meaning of creativity, McKerracher has made the quest itself the locus of imagination. Here, creativity is a journey, not a destination — the search for creativity becomes its most eloquent expression. It’s a worthy exploration of language’s simultaneous potential and failure to bring people, ideas, and clusters of meaning together, if only metaphorically. mRb