Where I Wanted to Be

A review of Where I Wanted to Be by Tom Abray

Tom Abray’s Where I Wanted to Be opens with its hero Will Gough bombing his first performance review at the Ville Saint-Laurent plastic packaging company where he works. The scene is debatably the most eventful and jarring of the whole novel, which then gently patters over six months of Will’s life.

Throughout the short novel, Will navigates a web of professional frustrations and domestic quandaries as a father of two young boys (for example: Should sleepovers be allowed on a weekday? Should you allow your ten-year-old to beat you at soccer?). Abray carefully bifurcates Will’s life into two distinct worlds, work and home. The charm of the domestic scenes, often dominated by frank, age-appropriate discussions with his young sons, exposes the corporate theatrics and prickly politics of Will’s exchanges at work with colleagues and clients. 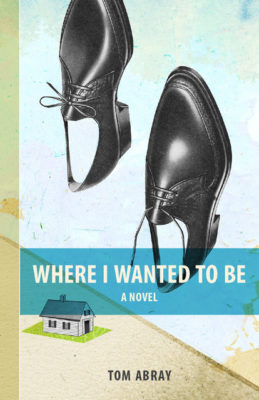 Where I Wanted to Be
Tom Abray

Some of the best and most comedic moments in the novel are when the two worlds briefly overlap. For example, when Will takes his sons to work and they meet his disagreeable boss, or when he tells a disinterested client about the gifts he bought his sons. Will has a propensity to overshare with clients – and it is details like this that make him an utterly believable, and likeable, protagonist.

Indeed, you can’t help but root for him despite, and almost because of, his slip-ups. And he is hardly the failure the opening scene might have us believe: he has integrity and dutifully addresses each minor challenge that comes his way, regardless of whether it’s a leaking toilet, a grumpy ten-year-old, or a rude packaging plant foreman. Meanwhile, he fences with broader anxieties about job security and daydreams of what life would be like outside of Montreal, in a different job, a different set-up. The tension between balancing everyday tasks and challenges with broader existential crises is masterfully woven throughout the novel.

The novel is not for those wishing to be dazzled by other places or worlds. Instead, it mischievously captures the everyday experiences that so many city- and office-dwellers share. In direct and unadorned prose, Abray captures the humdrum rhythm of daily life, in all its small joys and disappointments. He does not hold back on scenes that might be deemed by other authors as too mundane to be fictionalized – to great comedic effect. These include the drudgery that is half-heartedly browsing internet job boards when you already have a job, or awkward, bleary-eyed exchanges with colleagues over morning coffee in the staff kitchen.

Occasionally, the point of view shifts from Will to one of his family members. One particularly memorable and amusing scene is when seven-year- old Daniel, inspired by his grandmother’s sewing machine, strategizes how he would go about sewing a shirt. On the other hand, the reader is given far fewer opportunities to wander into the mind of Karen, Will’s supportive and hard-working wife. She remains a quiet presence throughout the novel; it would have been nice to know and understand her better.

The book consistently teeters on the edge of a grand dénouement – a betrayal, a blow-up, an accident. Here lies the book’s charm and uniqueness. Life happens: the seasons fold into each other, the boys go to weekly sports practice, and Will and Karen occasionally bicker. But nothing is extreme in this book – not even the toilet leak. It’s a highly readable and funny rendition of real life. mRb