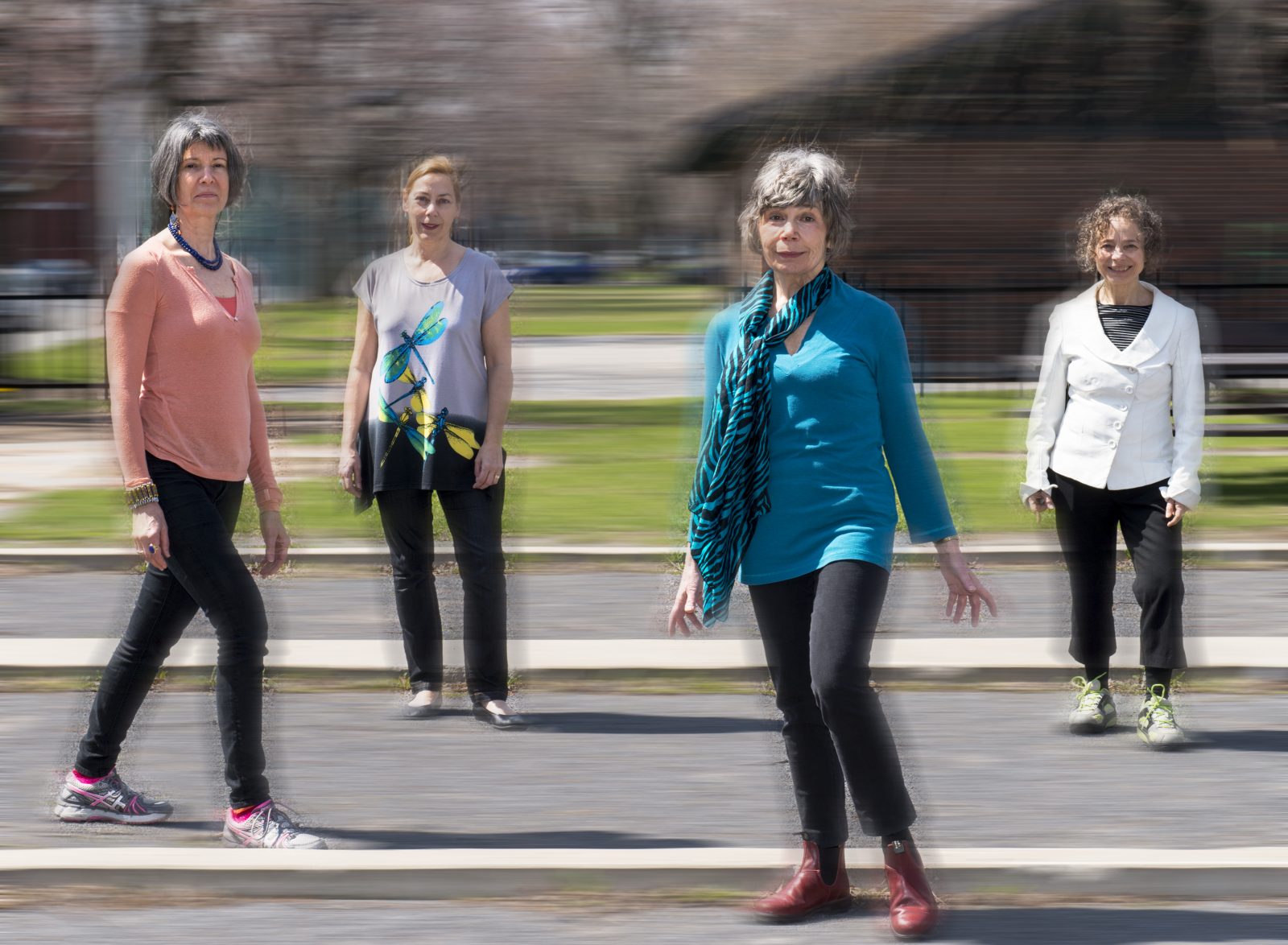 “The greatest thing by far is to have a command of metaphor,” Aristotle argued in his Poetics. “It is the mark of genius, for to make good metaphors implies an eye for resemblance.” Much of Western thought and literature has been built on that reverent foundation, the belief that metaphor is the least direct but somehow shortest path to truth, endowed with an almost sacred power to reveal the unity of all things.

So what happens when you scrub poetry of figurative language, besides sending Aristotle into a grave-spin? 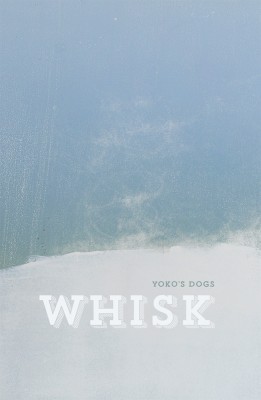 With their new collection, Whisk, the poetry collective Yoko’s Dogs offers one answer to that question. Since 2006, poets Susan Gillis, Mary di Michele, Jan Conn, and Jane Munro have been studying and composing renku, a Japanese form of collaborative linked verse. Working mostly via email from points across North America, and in person at an annual writing retreat, the four developed a system of composition appropriate to the form and to the geographic distance between them.

A poem would begin with one poet sending an opening, three-line verse, called a hokku, to the group. Then, one by one, each poet, in a predetermined order, would add her own verse, to create a four-stanza poem. While composition followed a set order, the poem was shared amongst all the poets at each step, so the entire group could follow its development.

“The renku tradition seemed very balanced,” says Conn. “Four stanzas, four voices. It seemed very democratic. There are lots of rules, and once we mastered those we delighted in breaking many of them.” In the process of preparing Whisk for publication, for example, seven-, ten-, and twelve-stanza pieces were created by combining several four-stanza poems, allowing for greater elaboration and variety.

Stanzas are linked, says di Michele, “through montage rather than a continuous narrative or theme. Links are not logical, but imagistic or tonal.” Indeed, the loose association between verses, rather than the building of a story or a poetic argument, is one of the defining features of the renku tradition and of the Dogs’ practice. The group eschews the referential language of metaphor and the editorial mode of the lyric, exploring instead the resonance created by juxtaposing one image or feeling with another.

Susan Gillis offers an example: “If one verse has a red ball being thrown, the linking verse might have the colour red or a ball or an action of throwing, all very direct kinds of links, or it might pick up a mood of abandon or festivity or another situational thing and link to that, or again it might transform that red ball into the setting sun on the horizon.”

Often the links are hardly perceptible, and while it’s possible to discern how a poem moves from the flight of a red-tailed hawk to the chirp of a treed squirrel to Twitter to Tahrir Square, the shock of jumping from one image to another is often more exciting than solving the riddle of its connections.

“A strength of renku,” says Conn, “is that it concentrates on the five senses.” The poems paint pictures that are not purely visual, but fully sensory, including scents, sounds, and sensa- tions that can conjure a moment – or several juxtaposed moments – for the reader.

The task seems deceptively simple, but required a unique kind of writerly attention from the poets. Munro describes her verses as cats that would only come to her when she ignored them. “While that simplicity of image and straightforwardness of voice sounds easy, free, light-hearted – just a quick little dance – it sometimes took us a long time and considerable back- and-forth to compose. Plus, working with the constraints and protocols was challenging.”

The avoidance of metaphor was among those constraints, and the Dogs acknowledge that reading poems so stripped of figurative language can represent a challenge for the reader, whose mind might naturally search for narrative or another, more familiar poetic approach.

“I remember not getting haiku,” says di Michele. “Some would fall flat for me at times. I did not know how to unpack the images, images that are pure ‘show’ and no ‘tell.’ But [now], the excitement for me is suddenly seeing without being told!”

In the renku tradition there are lots of rules, and once we mastered those we delighted in breaking many of them.

The poems are deeply, sometimes dizzyingly, simple, and yet can seem frustratingly disjointed if one is unprepared for their illogical leaps. The simplicity of their language makes it easy to begin reading quickly, but the sudden shift in a new stanza to an entirely different moment, image, or place is both jarring and stimulating. It causes one to pause, hesitate, contemplate. Where some constraint-based poetry seems more fun to have written than to have read, these poems demand a discipline from the reader similar to that practiced by the poets: What does an image do when it does not refer to anything else? How can I tune my mind to this kind of seeing? When a poem is not making metaphors, what is it doing instead?

If the Dogs use the words “discipline” and “rigour” repeatedly in describing their collaboration, it is with a sense of joy; the invigoration of an interesting challenge, shared among friends. The honesty, diplomacy, and “doggedness” required came easily to these long-time friends.

When asked about sharing ownership of a poem with others, Gillis says:

We’re very much like a family. A little microcosm that has its own ‘language,’ developed almost unconsciously over the years. I think early on we heeded advice from Roo Borson and Kim Maltman of the collective Pain Not Bread, to not settle for majority rule in disagreements but work all the way through them till something fully acceptable to all of us emerges… Sometimes it’s tempting to give up on a difficult verse, even when there are things in it that seem worth working out. Recognizing when to toss it, change direction, and when to stay with it till the kernel of it emerges – that’s something we deal with.

Facing the pleasures and frustrations of writing with a family of poets was as much a comfort as a challenge; it provided a safe but rigorous vehicle for growth. Munro compares the group’s work to her long- standing yoga practice. “I feel working with Yoko’s Dogs is a form of yoga,” she says. “I’ve struggled to bring intelligence to every aspect of the verses I’ve submitted, learned a lot about myself in the process, and then, let it go: I did my best with my small bit without anticipating what would come next. Like yoga, it’s been transformative – and the work makes me happy.”

It also produces an enormous amount of email. With Gillis and di Michele based in Montreal, Munro in Vancouver, and Conn in upstate New York, the group has faced as many logistical challenges as creative ones. They have experimented with collaboration by Skype, telephone, and blog, but the majority of their work happens through email, which allows them to fit their composition in between teaching, writing, and other responsibilities. An annual retreat allows more time for discussion, spontaneity, and fun, as verses are composed in person, closer perhaps to the origins of renku, which was traditionally composed in groups during outdoor gatherings.

With Whisk released out into the world, the Dogs are now turning their attention to new work, experimenting with new forms, and exploring ways to “score” their renku poems for collaborative readings on the rare occasions when they are gathered in the same place at the same time. They have recently been exploring how to divide a single poem between their voices and discovering a whole new layer of their work in the process.

“It’s a remarkable shift for us, to read with multiple voices,” says Conn. “It allows me to re-examine each poem at yet another level. Like one of those Russian doll sets: there always seems to be more inside.”  mRb