Filling in the Blanks

A review of White Out by Martine Delvaux

In some ways, Martine Delvaux’s White Out is an origin story and a family history. However, as the title indicates, it is a narrative dominated by blankness, where absence matters as much as presence. The absence of the narrator’s father functions as a central void, which threatens to consume anything that is solid and tangible about her life. The text is, by necessity, a story without a climax or resolution; it is driven less by plot than by a series of meditations and unanswered questions. Nonetheless, the compulsive energy of the language, translated into English by Katia Grubisic, is such that it hits the reader like an avalanche or a blinding blizzard. There is little to grasp on to, but the reading experience is consuming.

What the narrator does know: she was born in Quebec City in 1968 to the young daughter of a prominent Montreal family. The narrator’s mother had become pregnant after a short- lived affair and, faced with her family’s disapproval, initially leaves her baby at an orphanage run by nuns. A short time later, her mother returns for her and they go on to live in Montreal with her extended family. While she has regularly questioned her mother about her father’s identity, she has never been able to uncover any significant details. The aim is not to find her father, although she does confess to fantasies of reunion, but to understand how to make sense of her own identity when her life “is the result of ignorance or innocence, nonchalance or a misunderstanding: a mistake and an accident.” 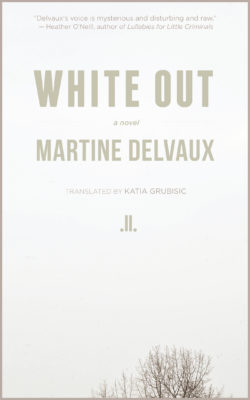 A series of cataclysmic social shifts at the time of the narrator’s birth, particularly the Quiet Revolution, add to the sense of dislocation in her story. At a time that was not so long ago and yet seems impossibly far away, her conception and birth were intimately tied to cultural and religious stigma about illegitimate births. She describes the history of orphanages in Quebec with a detached calm, and reflects on residential schools in Canada and the Magdalene Laundries of Ireland, where women who experienced illegitimate pregnancies were often condemned to lives of hard labour. The underlying commentary on how this societal trauma compounds the narrator’s personal trauma is made all the more impactful by her sparse, unadorned statements: “In 1970, the Quebec Civil Code recognized some of the rights of children born out of wedlock […] In 1981, notions of legitimacy and illegitimacy were officially abolished.” The question lingers: What does this mean for the children born before that?

One of the most immediate and striking features of White Out is its unusual structure and layout. The text does not contain sections or chapter breaks; it exists as a series of fragments scattered across the pages, rather than the more typical and tidy divisions of sentence, paragraph, and chapter. For example, the first page contains only the text: “This is the end of the story, and the beginning. How does it feel, I get asked, not to know who my father is.” This is followed by a blank page before the content resumes. The narrator’s life lacks the central organizing principle of a father figure, and the disorientation of that experience becomes mirrored in the way the text is presented; readers’ assumption that the words will line up neatly from top to the bottom is something akin to the assumption that a child will originate within the tidy structure of a nuclear family.

While the fragmentation is explicitly connected to the narrator’s sense of lack and loss, perhaps the most hopeful thing about a narrative that risks feeling futile is the way she links her loss to her creative power. Because Nature abhors a vacuum, the lack, the gap, and the wound all become generative: “He left so that I could write.” If this is the only meaning to draw from a primal loss, it is not nothing. Even if the words are fragmented, the page is not blank. mRb