With a Closed Fist

A current Montreal real estate website describes Point St. Charles as an up-and-coming neighbourhood, a good bet for potential property owners, and an opportunity for “more house for your money!” The irony is surely not lost on writer and journalist Kathy Dobson, whose memoir With A Closed Fist recalls a time when the Point was the last place anyone would willingly choose to settle. In the 1960s and 1970s, “Canada’s toughest neighbourhood” was neglected, disenfranchised, and prone to outbreaks of fire, roaches, and gangs of kids warring over territory. It was also Dobson’s childhood home. It was where her mother became politicized over her family’s abysmal living conditions, and where a young Kathy and her five sisters would regularly be recruited for lie-ins on the street and protests against an indifferent city hall.

With A Closed Fist is a kind of grassroots history of a time and place fast disappearing. Condo developments and gentrification are changing the face of Point St. Charles, from a one-time working-class slum and literal dump into the kind of place that gives developers a particular eye-gleam: it’s cheap, “authentic,” au courant, and, most importantly, marketable. But Dobson’s book records a much different transformation.As Kathy fights with an oblivious teacher over a school uniform she can’t afford, the women of the Point hold protests outside the school board office to get their kids better educations; as Kathy explores an abandoned building where the roaches form “a large wiggling carpet,” her mom joins an Informed Citizens group and meets with social work students from McGill to teach them how to listen to the poor. The memoir chronicles a true people’s movement, one that led to the autonomous Community Clinic being created to serve the neighbourhood, and Kathy and other Point kids being allowed to attend better schools in Westmount. 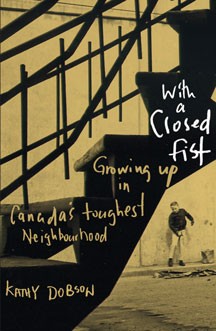 Dobson doesn’t write as an adult looking back on childhood with the insight of experience, but “straight up, in my own voice, as a kid growing up in the Point.” For the most part, younger Kathy’s voice is strikingly believable: candid, scornful, funny, unadorned with the sentimentalism or preciousness some writers feel toward their younger selves. It reads like fiction. She speaks with the same frankness whether she deals with sexual abuse and near-starvation or talks about pranking the neighbours, hiding from the bailiff, and falling into a seething stew of cockroaches. Her harshest stories lack the gravity that more decorous, middle-class approaches to dire circumstance seem to require, and the effect is unsettling.

Dobson illustrates class tensions shrewdly. She shows how poor kids who get rerouted to middle-class schools or neighbourhoods don’t become middle-class by association – there are still and always deep divisions that isolate Kathy and the other Point kids from their peers at Westmount High. She systematically avoids the heartwarming tropes of the coming- of-age story.The charming teacher, the kindhearted social worker, the prospect of a new job all fail to transform Kathy from a troubled, shiftless kid to a self-actualizing, stable grown-up; unlike an after-school special, there are no simple solutions here.The one exception is the book’s ending, which feels like a breathless rush to deliverance. It’s like Dobson ran out of time and had to engineer a boyfriend ex machina so we’d be able to sleep at night. It’s a little disappointing for a book that otherwise avoids easy answers, and whose struggle is of a neighbourhood as much as a single person.

She speaks with the same frankness whether she deals with sexual abuse and near-starvation or talks about pranking the neighbours, hiding from the bailiff, and falling into a seething stew of cockroaches.

With A Closed Fist shares the time and place of David Fennario’s groundbreaking 1979 play Balconville, and the two works have a close sensibility. In 2005, Fennario revisited his setting and characters in Condoville, where the changes to the neighbourhood play out in tensions between the older residents and the new, gentrifying class, represented by a mixed-race gay couple. It’s a complicated dynamic, between those whose hard-won victories are under threat and those with their own struggles to find a tolerant space. But personal differences fall away in the face of structural inequality. A system that bars the poor from controlling their own possibilities will never serve anyone well, not even those who, at first, seem to prosper from it.

In one passage, Kathy’s mother Eileen speaks to the student social workers from McGill gathered at her kitchen table:

After all Eileen’s agitation, passion, and community organizing, it’s sad to think that her dream of a common language is as elusive as ever. At the very least, this memoir is a powerful tribute to her and a reminder of how difficult and essential is the work of speaking, and listening. mRb