The Politics of Representation

A review of Women and Power by Pascale Navarro

White women in Manitoba became the first in Canada to gain the right to vote and hold provincial office 101 years ago this January. By 1918, many Canadian women could vote at the federal level, though women in Quebec had to wait until 1940 to win electoral rights in their own province. Asian Canadians were not granted federal franchise until after the Second World War and First Nations men and women were excluded federally until 1960 and in Quebec until 1969.

None of this is exactly ancient history. And according to Montreal journalist and columnist Pascale Navarro, it’s still too soon for Canadian women to rest on their laurels. In her latest work, Navarro, who was honoured with a 2016 Governor General’s Award in Commemoration of the Persons Case, examines gender inequality in Canada, urging readers to take a closer look. “Legally, there is nothing holding us back from experiencing full equality in our everyday lives,” she admits before emphasizing the discrepancy between principle and practice: “Of course, equal rights do not always exist in reality. Wage gaps are still prevalent between men and women, for example.”

Women and Power, the first of Navarro’s books to be translated to English, feels timely thanks to Hillary Clinton’s recent run in the American presidential election and Prime Minister Justin Trudeau’s 2015 formation of Canada’s first gender-balanced cabinet. While applauding Trudeau’s move, Navarro cautions readers that the House of Commons still only includes twenty-seven percent women. “If the government fell tomorrow, Cabinet parity would disappear without debate,” she notes.

Easy to read in a couple of sittings, this short book is straightforward and accessible, avoiding the pitfalls of preaching only to the choir. Navarro makes sure we’re all on the same page by defining gender parity right from the outset: “It means an equal number of women and men elected to government—a sharing of political power between women and men on an equal basis, which means about forty to sixty percent women in power.” Stressing the undemocratic nature of unequal representation, she maintains: “The political system we call democracy means that the people—the population—decides. And the population is made up of at least 50 percent women.” 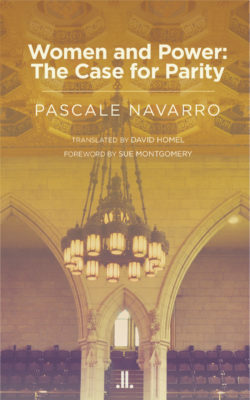 Navarro shows how a lack of parity can lead to systemic discrimination and budgetary decisions that negatively affect women. As a current example, she contrasts Quebec’s hefty investment in construction and infrastructure – areas of economic activity in which men predominate – with its austerity policies, which have engendered harsh cuts to health and social services. “Not only are [women] the main beneficiaries of public services, but [women] also work in government in great numbers, especially in social services,” she remarks.

Readers may be surprised to learn that Canada lags behind many countries, ranking only sixtieth worldwide when it comes to the percentage of women in Parliament. Welcoming men to feminist discussions, Navarro challenges the perception that quotas discredit women, and includes ample footnotes for those who wish to investigate further.

Acknowledging that many women shy away from politics, finding the environment too hostile and adverse to work-life balance, Navarro rightly insists we need to alter the very nature of the game. While women (like men) don’t systematically make good leaders, it stands to reason that improved representation of women, whose socialization, as Navarro points out, has been more oriented towards care, would be a game changer for women and men alike. “Unfortunately, like the patriarchal system, we ourselves denigrate what is most feminine in us,” she aptly observes in her final chapter, presenting a theme that warrants another whole book. “If they have characteristics considered feminine, men too have a tough time. Concern, care for others, compassion; these things don’t fit well with productivity, performance, and profit.”

Women and Power packs an impressive amount of information into a few pages, serving as an astute update on the issue of gender parity in Quebec and Canada. But beyond just taking stock, the book advances an appealing vision. Inviting “more of the feminine” into the halls of power, Navarro specifies that this isn’t just about making room for women in an established space; it’s about creating a new space that incorporates both women’s and men’s points of view.