A review of Wonder by Dominique Fortier

Augustus Edward Hough Love was the British mathematician who, in 1911, developed a model of surface waves in geodynamics that are called, in his honour, “Love waves.” What irresistible fodder for a storyteller! Dominique Fortier puts him in her novel Wonder, translated by Sheila Fischman, where he appears as a shy geek who finds true romance with Garance, an equally geeky young woman who lies upon the earth to listen to its music. On holiday in Bath, Garance helps Augustus develop a good opinion of Jane Austen, although he had “never since childhood felt like opening a novel,” preferring to read books about “the world as it really [is] without also having to worry about those that held pure ravings.”

Fortier’s writing is very far from “pure ravings.” It is lucid, rich in detail, and showcases her deep and broad interest in the history of science, which sets her novels apart from much of fiction. Her characters live in a world that she sees in its historical context, with scientific ideas among the currents that shape its landscapes, including the topography of human relations. 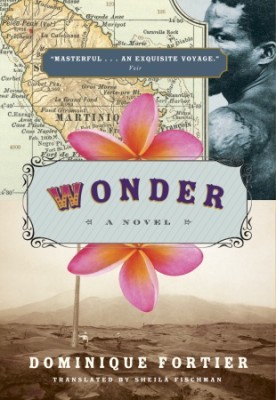 Wonder begins on the cusp of a disaster. It is 1902, and in Saint-Pierre, on the island of Martinique, it is snowing ash from Mount Pelée, the volcano that overlooks the city. Baptiste is chafing with boredom and humiliation, seated at a table with his fellow servants. Their employers are indulging in a Carnival-time reversal of roles, dressing in the help’s clothes and, maladroit and bad-tempered, serving them a meal. Later, in a portside tavern, he knifes his master’s arrogant son, who is taking liberties with a young mulatto woman; for this crime he is thrown in a dungeon. When the volcano overlooking the city blows, it kills every single person in Saint-Pierre – except, entombed in his hole in the ground, the burned and thirst-scorched Baptiste. His subsequent fame as the only survivor of the spectacular eruption of Mount Pelée gets him a job with the circus as “The Man who Lived Through Doomsday.” This leads him to romance, and disaster of another kind.

And then there is Rose, who walks Mount Royal with a pack of dogs: her own great and gentle Damocles as well as a bunch of rough-and-tumble  others. Rose is a keen and quiet observer, drawing for the reader a lyrical portrait of Montreal’s mountain as it changes through the seasons. She comes to love through her wanderings and her sensitivity to the beauty of the life around her.

If it is hard to see the connection between the three characters – Edward and Baptiste, historical figures brought to warm life by Fortier, and the contemporary and (presumably) wholly fictional Rose – that is because the connection is tenuous, tied by a few slender threads. Presented in three quite separate sections, each concerned with different characters and different times and places, Wonder will challenge those who expect a single coherent story rolling along a path from A to B. The reader is given only the slightest of justifications for making narrative links between the three stories and their inhabitants. Fortier gives the reader the task of making new connections in the neuronal map of the world we live in: its hidden movements under the earth, peregrinations of people in time and space, and the constant, difficult, and often beautiful complications of the human heart. mRb