In Wrestling with Life, his stirring memoir written with Richard King, George Reinitz looks back on a life coloured by both tragedy and triumph. His story reveals the horrors of Auschwitz, the loss of family, struggles in a new country, and achievements won through hard work, determination, and an open heart.

George Reinitz was a happy youngster. But all that changed in 1944, when he was twelve. He and his family were taken from their home in Szikszó, Hungary, and crammed into boxcars for a harrowing journey that ended days later at Auschwitz, where his mother and sister were immediately murdered.

Reinitz and his father were tattooed, each another number in the slave labour workforce, where if the exertion and guards didn’t kill you, starvation or sickness would. At Auschwitz, Reinitz staved off gnawing hunger by risking his life to steal potato peelings that he shared with his father and others. The war left him an orphan with few surviving relatives, but the resourcefulness and generosity of spirit he learned in the death camp continued to serve him well. Sadly, Reinitz’s father – a man whose words would guide Reinitz throughout his life – perished on a death march shortly before the Russians liberated the camp. Yet that tragic loss could not destroy what Reinitz most needed to make something of his life – a positive attitude, a strong work ethic, and gratitude for the people who helped him succeed.

After the Holocaust, the greatest challenge for many survivors was not making a new life but learning how to cherish it. Nobel laureate Eli Wiesel once said, “When a person doesn’t have gratitude, something is missing in his or her humanity.” 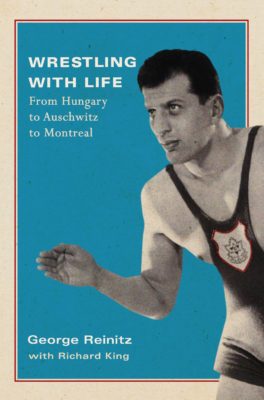 As a boy in Szikszó where his father was a successful businessman, Reinitz learned about fair and thoughtful treatment. His father taught him to always “give a little more,” whether it was his treatment of others or in reaching for excellence.

Reinitz’s humanity could easily have been buried at Auschwitz, yet he never lost hope. Following his liberation, he returned to his hometown. In 1948, he immigrated to Montreal as part of the Canadian Jewish Congress’s War Orphans Project.

Despite Reinitz’s horrific experiences and a deep-seated anger over the death of his parents, Wrestling with Life is a book filled with lessons about gratitude, lessons Reinitz learned from the people who helped him along the way, like his Auntie Annie, whom he first met when boarding with her.

To be close to his friend, Reinitz took a job in a furniture factory and excelled at learning the business from the ground up. Through another friend, he was introduced to wrestling, a sport well suited to a young man with an independent, risk-taking nature. Wrestling would become an integral part of Reinitz’s life. He became a world-class wrestler, and some nine years after arriving in Montreal, competed internationally, carrying the flag for the Canadian team at the 1957 Maccabiah Games in Israel. Just married, George and his new wife, Eleanor, turned that trip into a honeymoon. Years later, his love of the sport and the values it instills led to the endowment of the Reinitz Wrestling Centre.

With straightforward storytelling, Reinitz describes his success in business and how he became a leading furniture manufacturer. The business flourished not only because of his acumen but as a result of his philosophy: “if you give people a little more than they expect they will feel good about themselves and put out a little extra effort that makes a business successful.”

Through his philanthropy, his respect for people and finally, with this memoir of a rich and full life, George Reinitz has demonstrated deep gratitude. mRb