A review of Yasodhara by Vanessa R. Sasson

For many lay readers coming to Vanessa R. Sasson’s powerfully imagined new novel Yasodhara, the nearest previous equivalent might be Herman Hesse’s Siddhartha. A 1922 novel that told the tale of an acolyte in the time of Gautama Buddha, it achieved a grassroots revival as a travel- companion volume for counterculture seekers of the 1960s and 70s. Serving as an introduction to Buddhist precepts for many non-adepts, it nonetheless left a gap for a popular treatment from another perspective. Thanks to Montreal scholar Sasson, we now have a book that is not only an ideal complement to Hesse, but very much its own thing.

In her introduction, Sasson is at pains to say that what she has written isn’t a historical novel. Verifiable information on the Buddha is scant at best; there are even those who claim he never existed. With his wife, there’s even less to go on. So let’s instead call Yasodhara a novel of historical speculation, with the accent on the second word – and given the author’s deep reading on the subject, there’s nothing idle about her speculation. 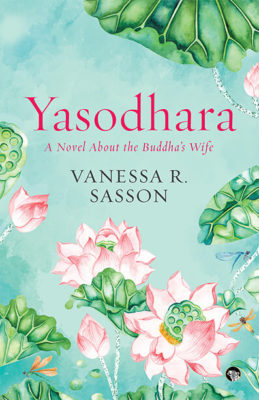 Yasodhara
A Novel About the Buddha’s Wife
Vanessa R. Sasson

Sasson provides extensive notes on how her telling of Yasodhara’s life and relationship with the future Buddha differs from the available hagiographies. Wisely, she keeps those notes separate: readers needn’t feel obliged to flip back and forth between the novel proper and the commentary, though it is highly likely that once they have read the whole story, they’ll appreciate the opportunity to dig deeper into its context and underpinnings.

Immediately striking, upon entering the novel, is Sasson’s way with sensory detail. She conveys a vivid impression of how everyday life must have felt, sounded, and tasted in the fifth-century BCE court of a remote kingdom in what we now call Nepal. The solid scene-setting is in aid of a story that, for all its historical import and mythic dimension, unfolds on a human scale. Yasodhara and Prince Siddhartha’s privileged childhoods, their bond that grows into love, and her anguish at her husband’s eventual abandonment of his marriage and family to follow his predestined path of renunciation are as relatable as any tale set in humbler circumstances because Sasson has written them as characters, not as symbols.

Structured in the classic narrative manner and confined mostly to Yasodhara’s point of view, the novel nonetheless contains numerous passages that can work as self-contained set pieces: the chapter where future husband and wife first choose each other, the account of a tournament where young men compete for the princess’s hand in marriage, the story of Yasodhara’s long-desired first pregnancy. When the gods figure in the action, readers will likely be willing to take the leap into the supernatural because, by the time it happens, Sasson has earned their trust.

Employing a strongly feminist perspective, Sasson risks the charge of inserting modern-day ideas into an ancient framework. She avoids that pitfall not only by writing about the roots of a religious tradition that has honoured the feminine more than many another faith, but in how ideas of universal women’s rights are folded organically into the narrative: as plain-spoken, self-evident truths no less true for the fact that, millennia later, they are still being fought for. mRb