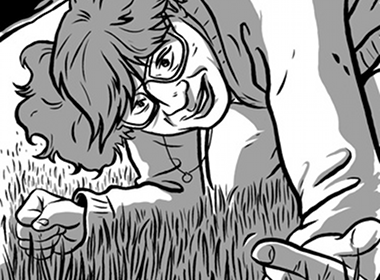 You Are A Cat!

If Sherwin Tjia were a cat, he’d likely prefer to answer nature’s call outdoors rather than within the cramped confines of a litter box. The poet, painter, and illustrator who brought us The World is a Heartbreaker, an A. M. Klein Poetry Prize finalist collection of pseudo “potato chip” haiku, continues to take the road less traveled, marking new territory along the way.

To catnap or not to catnap, that is often the life-or-death question in Tjia’s latest creation – a skilfully illustrated graphic novel that is, in more ways than one, truly novel. You Are a Cat! is the first title in his bogus Pick-a-Plot!™ series, parodying the game books popularized in the 1980s.

The bottom of each page offers a list of options so that readers get to create their own “catventures” through the eyes of Holden Catfield. “If you want to continue outside, step to page 3,” or “if you decide that today is more of a ‘nap in a sunbeam’ sort of day, retreat to page 17.” Either way, Tjia will lead you down some pretty twisted back alleys.

As playful in person as he is in print, here is what Tjia had to say when we met to discuss his latest work. 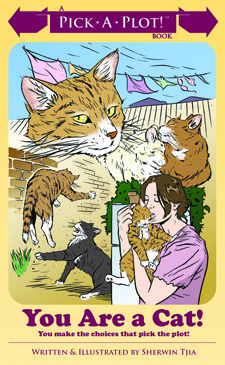 Kimberly Bourgeois: It’s interesting that you chose to write from the perspective of a cat. What is your relationship to cats?
Sherwon Tjia: I love them, and I think about them a lot. I like to hang out with cats, and, because I’ve spent so much time hanging out with them, I feel like I know them quite well. I know how they would think and act in different situations, and also the kinds of adventures that they might go on when they leave the house.

KB: Do you ever feel like a cat?
ST: Definitely, I like to be comfortable like a cat. I’m a little finicky, I’m particular, and I like to sleep a lot. And that’s probably where the similarities end.

KB: If you had nine lives, how would you spend the ninth one?
ST: That is a complicated question; I’m not quite sure how to answer that, actually. I think about reincarnation a lot, because I believe in it. … So the idea that you have nine lives and that you’ve worked your way through all of them is a terrifying notion because that’s like: full stop, this is the life you’ve got. But knowing that that’s your last life and that there is an element of choice there, I don’t know that I would come back as a cat. I’d probably want to come back as a celebrity. And I think the interesting thing about celebrities is that they, above all of us, can enact a life where they live just like a cat. Because a cat can be lazy, finicky – you know, spur of the moment – do wild things, take wild chances, and, at the same time, have a life of complete comfort.

KB: Is there any one celebrity you’d want to be?
ST: I’d want to be one of those celebrities who don’t need to work, one of those heiresses – like Paris Hilton. … But, the problem with being that rich is that you grow up in that environment, so, while you might be scandalously rich, I feel like there is an impoverishment of imagination. Your imagination is cultivated when you don’t have anything, when you grow up poor. So, if it’s my last life, I would love to be an heiress, but with the imagination that comes from growing up poor.

KB: What does your hero, Holden Catfield, have in common with Holden Caulfield from The Catcher in the Rye?
ST: (laughs) I just thought it was a charming name, but the more I thought about it – like after I wrote the book – the more it seemed like Holden Caulfield and Holden Catfield actually had a lot in common in a very strange way, in that they both go on this kind of walking journey. In the case of Holden Caulfield, it’s through New York, where these tall buildings make him feel very small. And, he kind of follows his whims. He’s like, I feel like going skating, or maybe I’ll call up that girl, or whatever. In <em>You Are a Cat!</em>, you can kind of do the same thing; there’s a girl you can go visit. … And, the fences and the world make you feel very small, because you’re a cat. So, from your point of view, the world is huge. You make these random decisions, and you are occasionally surprised by the depravity of the world.

KB : Holden Catfield lives with a highly dysfunctional family. This is not the first time you’ve explored this kind of psychological territory. Your comic strip, Pedigree Girls, for example, also alludes to discordance in the home. In her memoir, The Liars’ Club, Mary Karr writes: “A dysfunctional family is any family with more than one person in it.” Would you agree with this?
ST: (laughs) Yea, all families are dysfunctional in their own way. At the beginning, I wasn’t sure how this family (in the book) would be dysfunctional; I wanted it to be interesting. And I wanted you, as the cat, to be privy to the entire picture of the family, though the family isn’t privy to the entire picture of itself. As a cat, you’re the perfect voyeur, because you can’t say anything. So, yea, I agree that every family is dysfunctional in its own way. But also families are very functional. Family members find ways to be loving, despite being related to each other.

KB: Your book reminds us that cats are pretty good at keeping secrets given that they can’t speak plain English. Do you have any secrets you would only share with a cat?
ST: Yes.

KB: Do you want to leave that as a one-word answer?
ST: (laughs) Absolutely. I’m not going to elaborate.

KB: Through Holden’s eyes, the reader is presented with choices along the way. Ultimately, however, each path leads to trouble-tinged creepiness. Does this reflect your own vision of life? Is the idea of choice – or free will – simply an illusion? Would you describe yourself as a fatalist?
ST: (laughs) It’s a book. It has a limited number of pages. I couldn’t write forever. In many ways, I had to corral readers while affording them meaningful and non-meaningful choices. Because that’s the whole shtick of the book – you get to make choices. And, you get to go on a wild journey or a mild journey. But, at the same time, yes: you go to some dark places. Because, as the writer, I like dark places. I like interesting places. And I like places where reality creeps through the artifice of everyday life. I like it when you can kind of see people’s hidden selves in everyday life. Because people carefully manage their decorum – for good reasons. But I like it when, say, I’m on the bus and I’m looking at the car idling beside the bus and the driver is picking his nose or singing along with the radio. … Because I am interested in all the things people do when no one is watching. I like the authentic self. And, as the cat, you are in a unique position to see people’s authentic selves – because they trust you with that. And that’s quite lovely. mRb