Choose Your Own Rabbit Hole

You Are Alice in Wonderland’s Mum!

As a preteen in the early ’90s, I was obsessed with the Choose Your Own Adventure series, a collection of gamebooks where you – as both reader and protagonist – make choices that affect the outcome of the storyline. The plot of Sherwin Tjia’s new book, You Are Alice in Wonderland’s Mum!, is also influenced by decisions made by the reader. However, Tjia’s story is decidedly more ominous, mature, and socially pertinent than those of the original adventure collection.

This is the fourth Pick-A-Plot book from Conundrum Press written and illustrated by Tjia, and it’s the first in the series to feature a protagonist that isn’t a feline. Instead, as the title makes obvious, you are the mother of Alice Liddell, the reputed inspiration behind Lewis Carroll’s Alice’s Adventures in Wonderland. Such an inventive confluence of material makes sense coming from Tjia, the founder of events such as Slowdance Nights, Crowd Karaoke singalongs, and Strip Spelling Bees around Montreal and Toronto. 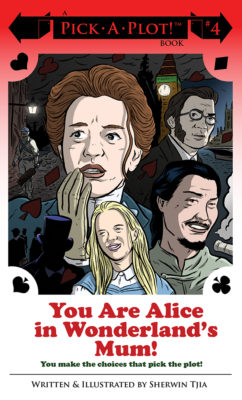 You Are Alice in Wonderland’s Mum
Sherwin Tjia

It’s difficult to summarize the plot, as there are many possible outcomes and a few very macabre endings, but the main premise of the book stays the same: it’s 1862 in London, England, and your young daughter Alice vanishes in Hyde Park. While Carroll’s classic is fantastical and psychedelic, the experiences of Alice’s mum are more grit than grandeur. Instead of ornate tea party confectioneries, there is just the stench of the Thames and the pungent bouquet of rotting fish and horse manure. Your twilight search through the Whitechapel district touches on issues of class, racism cloaked in Victorian-era moral panic about opium dens, and puritanical views of sex workers.

The intertwining storylines are all about what it means to be a woman travelling in a city after sunset, and the privilege that powerful men wield. You, as Alice’s mum, frequently worry about what it might look like to be “an unaccompanied woman moving through the night” and “how you would be blamed were anything to happen to you.” As you traverse through the park at dusk, you notice how statues of prominent Englishmen “loom like gargoyles.” Somewhere amidst masked balls, miniature cities built to scale, ornate theatrical productions, and the bowels of Buckingham Palace, lives a prince who wants girls to smile all the time. The prince always gets his way. Though your quest takes place in the 1800s, unfortunately this bleak state of gender inequality and misogyny doesn’t feel particularly archaic.

Some of the book’s more sinister routes involve Charles Dodgson, a.k.a. Lewis Carroll, who was a friend of the Liddell family. There’s been much scholarly debate about the nature of Dodgson’s relationship with Alice Liddell, but it’s difficult to comprehend an adult man whose muses are young girls as anything but predatory and pernicious. Tjia’s novel, both in its narratives and its acknowledgements section, makes a distinction between Dodgson’s literary craft and his personal life and choices, and the latter is certainly not held in high esteem.

The form of Tjia’s fiction, which allows readers to make their own plot choices, provides a reading experience that is quite engrossing, and maybe even nostalgic if you’re a fan of the original Choose Your Own Adventure series. After a year marked by innumerable lauded men facing accusations of countless acts of sexual violence, perhaps Alice’s mum is a portentous figure shouting across centuries: “You weep bitter tears at the thought of men, and their power, and all that they do. You remind yourself that this is the brutal history of the world, no matter what reforms conscience recommends.” mRb