Not everyone is a morning person, and Good Morning, Grumple is a story in rhyme that offers a solution to those grumpy feelings that overtake many of us when forced to greet another new day. Written by Victoria Allenby and illustrated using a combination of mixed media and collage by Manon Gauthier, this picture book introduces us to Grumple at his worst. When it comes to waking up, Grumple fights it all the way. He squirms, he twists, he flops, and grumbles; his cute little rosy-cheeked face wears a permanent scowl. 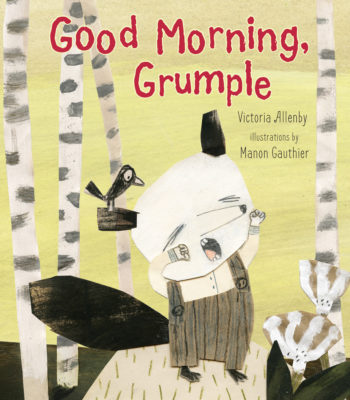 Fortunately his mother is full of kisses and hugs and stories and songs and by the end of it all Grumple is ready to “dance out the door and see what’s in store.” Good Morning, Grumple is a sweet spin on what can be a stressful morning routine that is sure to please both pre-school kids and their parents.

From the opening pages of the charming urban tale Colette’s Lost Pet, we are drawn into a bird’s-eye view of the back alleys of Montreal’s Mile End neighbourhood. The rectangular garden spaces that line the alleyways are as unique and diverse as its population. Isabelle Arsenault’s pencil, watercolour, and ink drawings take us into these backyard places where children spend their summer days: a full-on vegetable patch, a tropical paradise of potted plants arranged around a stone fountain, or a hard dirt track for remote controlled cars. It is in one of these rectangular garden spaces – the only yellow rectangles amidst a scene otherwise painted in grey and black – that the story begins. We see an empty packing box and hear Colette’s mother’s stressed out response to her daughter’s latest demand for a pet. It’s moving day and Colette is promptly ordered out of her new apartment and sent off to make friends. 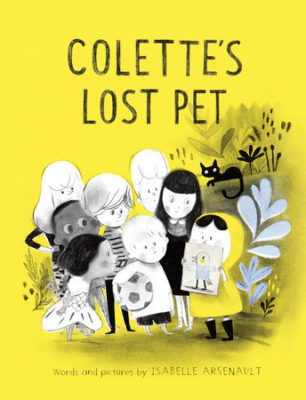 It’s impossible not to love little Colette in her bright yellow hooded jacket. Having no pet to keep her company, she ventures out into the alley and tells the lie that ultimately succeeds in winning her a whole neighbourhood of friends. But will Colette’s new pals desert her when they realize she’s taken them on an impossible search for a lost pet that never really existed? Arsenault manages to make sure everyone in Colette’s Lost Pet lives happily ever after, while also reminding readers that when it comes to sharing imaginary worlds, it’s more fun when everyone plays along. 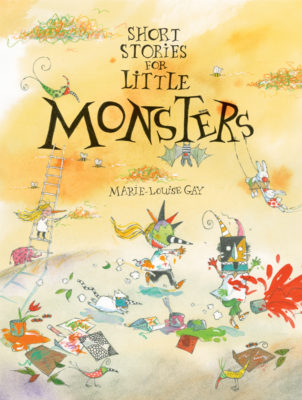 Short Stories for Little Monsters is a visual pleasure. In this large format hardcover collection of stories, Marie-Louise Gay has once again used a combination of watercolour, ink, pencils, and collage to create a whimsical world. This one is populated by cats who are terrorized by socks, trees who want to be ballet dancers, and adventure-loving kids in all kinds of shapes and sizes. Each story is told using word bubbles and panels laid out like a comic strip or graphic novel. As always, the drawings are delightful and skillfully executed. This collection works best when the strong visuals are left to tell the story. In “Zombie Mom” we see the perfect balance between Gay’s drawings and minimal text. While the little boys upstairs ruminate over mom’s possible superpowers, the mother in question keeps them in line with a few well-aimed interjections and some well placed maniacal laughter. In “Jump!” a classic older-younger brother moment is played out at the end of a pier, high above shark-infested waters, and “Snail Nightmares” goes deep into the psyche of the common gastropod. Short Stories for Little Monsters is another colourful and creative look at the world around us from the award-winning Marie-Louise Gay.

Tired of books that perpetuate the myth that all little girls aspire to sugar and spice and everything nice? Meet Olga, the heroine of Olga and The Smelly Thing from Nowhere, Elise Gravel’s combination graphic novel and chapter book for eight- to twelve-year-olds. Unlike her enemies, the pop-culture obsessed Shalala and Farla, Olga saves her passion and energy for the observation and protection of animals. For Olga, Rita, the French-speaking spider who lives under the sink, is a far superior choice for a friend than any of the annoying and self-absorbed humans around her. When Olga finds Meh, an unidentifiable being that looks like a cross between an inflated hamster and a potato drawn by a three-year-old, she thinks she has found not only her very own new species but also a soulmate who will make up for her  lack of human friends. So when Meh disappears, Olga must do everything she can to find her missing smelly, rainbow Skittle–pooping buddy. 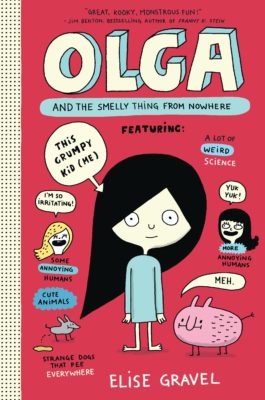 Olga and the Smelly Thing from Nowhere
Elise Gravel

Her search leads her to form an alliance with Chuck, a boy her age who has a pompadour of scribbles for hair and a strange wolf/chipmunk cross with a bladder problem for a pet. Together they set out to discover where Meh could have gone. Gravel’s charts and pseudo-scientific observations and inquiry introduce kids to the concepts of scientific research and reporting. And while Meh might be a figment of Olga’s fertile and hilarious imagination, there are some real lessons to be learned here about friendship, the importance of protecting all living beings no matter how smelly, and how even our enemies can possess admirable qualities and abilities. Leave it to this prolific writer and illustrator to create Olga, a girl who gives weirdos a good name.

In Lightning Lou, twelve-year-old Lou is a talented young hockey player in early twentieth-century Quebec with a dream of leaving provincial Saint-Christophe to work his way up through the amateurs and onward to the big leagues. It is a dream he shares with his charismatic older brother and hockey mentor Georges. But when World War I breaks out, Georges signs up against their father’s wishes and Lou is left behind, afraid that now his dreams of hockey fame and fortune will never come true. Georges is no longer around to help Lou and because so many young men are being sent overseas, amateur hockey has largely been put on hold. But then Monsieur Robichaud turns up in Saint-Christophe to recruit girls for the amateur Montreal Bakers women’s team. Despite the loss of the young men’s teams, Quebec is still hungry for hockey and any girl who makes it on the Bakers gets a ticket to Montreal and an invitation to a glamorous and exciting life in the city. When Coach Robichaud mistakes Lou for a girl, it doesn’t take much for Lou to decide to keep up the pretense and join the Bakers. 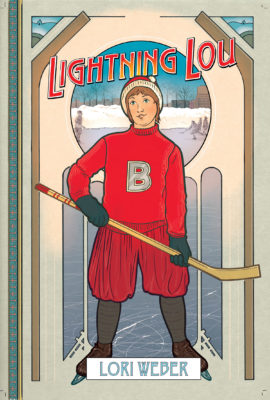 Author Lori Weber was inspired to write this novel for middle readers by the true story of Ada Lalonde – a seventeen-year-old boy who also tried to play hockey as a girl before being publicly exposed. In Lightning Lou she gets into a male protagonist’s head as he struggles to understand what the world looks like when you happen to be a girl who loves hockey above all else. The book ends with Lou leaving the team and vowing to help girls in Saint-Christophe realize their own dreams of playing hockey at the highest level. Weber admits to being a lifelong fan of the game, and her passion for the sport and for Quebec history is obvious in the tale of Lightning Lou, a story that resonates as strongly today as it did a hundred years ago.
B.A. Markus is a writer, performer, and performer living and working in Tiotia:ke/Montreal.