A review of My Wounded IslandThe Bad Mood and the StickMr. Crum's Potato PredicamentFatima and the Clementine ThievesFrom the Stars in the Sky to the Fish in the Sea by Jacques PasquetLemony SnicketAnne RenaudMireille MessierKai Cheng Thom

“why do I have to be just one thing?” asks young Miu Lan, the protagonist of Kai Cheng Thom’s From the Stars in the Sky to the Fish in the Sea, when they first go to school. Of course there’s the socially relevant gender choice, but animals and inanimate objects are also options: “bird or fish? cat or rabbit? tree or star?” 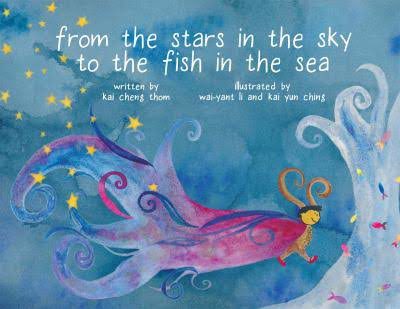 The initial result of wilful, happy indecision is a whimsical image of a baby with bunny ears, a human face, a buoy of a belly, and a marine body. When Miu Lan is a little older, there are peacock tails some days, wings others, and often antennas. This is all portrayed by Kai Yun Ching and Wai-Yant Li using watercolours and simple yet emotive faces drawn with black lines.

Inspired by the sentiment and form of Robert Munsch’s I’ll Love You Forever, Miu Lan’s mother loves them unconditionally and sings them a song of devotion every night. At home, it’s easy for the child to be a changing, playful form. Sadly, the staid five-year-olds at school are set on defining Mui Lan. “what are you supposed to be?” they demand.

Mother doesn’t have all the answers, but loves her child and keeps talking with and singing to them. Eventually, when Mui Lan once again wears “fur, feathers, scales, leaves and many sparkles that glittered like stars,” the other children are hooked.

It’s important for youngsters questioning their gender to see themselves in literature, and for other kids to see and more or less accept that fluidity. More generally, Mui Lan is always changing, and that sounds like the way all kids should be.

This book may also pave the way for more stories featuring gender variant characters, in addition to stories like this one of how those children deal with being in the world.

When Fatima wakes up to the destruction of her and her grandfather’s clementine grove in Mireille Messier’s Fatima and the Clementine Thieves, “what she sees turns her heart to marmalade.”

First the farmers try what’s easy and available to deter the creatures – noise and water – but these efforts are futile. Next, Fatima’s grandfather considers a more aggressive tactic for the survival of their crop – poison and weapons. Luckily, peaceful Fatima thinks to turn to her friends in the orchard, bug-eating spiders whom she rewards with sweet, sticky clementine peels. “Grandfather is right! We have tried everything humanly possible. But you are not human!”

The images flesh out the relationships in the story, detailing a web the spiders make to cheer up Fatima or showing Fatima and her grandfather talking in the shade.

The book may seem simple, but it encourages a respect and curiosity for the wonder of nature. After all, spider web is amazing stuff – ongoing research, for example, is looking into how we could make fibres from spider silk. So perhaps the version of the Ethiopian proverb that ends the tale is not as farfetched as it might at first seem: “When spider webs unite, they can stop elephants.”

Saratoga may be known for the horsies, but it’s also the site (at least one of them) of the invention of a beloved salty snack. In Anne Renaud’s Mr. Crum’s Potato Predicament, Chef George Crum shows the kind of patience and humour not necessarily associated with chefs in high-pressure kitchens when he takes an encounter with a picky customer as an opportunity for tasty invention. 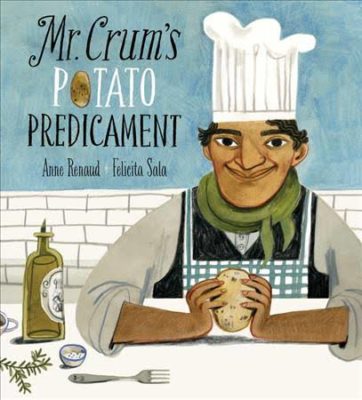 This fictionalized account of one start of the potato chip includes fun food vocabulary: Chef Crum “fricasséed and flambéed, boiled and braised, poached and puréed.” Felicita Sala’s vibrant images of Chef Crum in his kitchen, as well as of the dining room, with plum-cheeked waitress Gladys running between the two worlds, creates an impression of restaurant life – in 1853.

The descriptions are poetic but concise. Gladys puts yet another version of potatoes in front of the dissatisfied customer Filbert Punctilious Horsefeathers “with a wisp of a smile.” The story pivots on the interesting moment when a food item is reconsidered as appetizing, and this one is indeed undeniably “delectable and delicious!”

Lemony Snicket is evidently comfortable with dark material. Also known as Daniel Handler, he is the author of the best-selling A Series of Unfortunate Events, in which three orphans must outsmart evil and self-deluded adults.

His latest picture book, The Bad Mood and the Stick, is a relatively bright tale about the influences of a bad mood, fittingly portrayed as a grumpy yet colourful cloud, as it gets passed from one character to the next. With Snicket as dedicated to the strange as he is to the morbid, alongside the bad mood, he has readers follow the adventures of a stick, hence the title. At one point, the passing of the bad mood is interrupted: “You never know what is going to happen.” In this case, the surprise includes a wedding between two characters to which “everyone in this book was invited.” The courtship begins with a grown man who strips down to his underpants in public – but not in a scary way. Then again, suitably for Snicket, not in a totally un-scary way either.

Readers are drawn into the book’s world by Matthew Forsythe’s beautiful soft-washed, movement-filled images, not to mention the recurring ice cream theme. Handler has written that he is suspicious of literature specifically for children and at times the story seems to wink at adults: “Curly’s mother had ordered vanilla yogurt, but then she changed her mind and had fudge ripple, too.”

Although the story has a happy ending, it feels reductive to say it is ultimately a lesson about bad moods and their place in our lives (though isn’t it consoling to accept rather than try to deny or change nasty moods?). Mostly, it’s a silly, well-written story. Plus, there’s the stick and its own ice cream-related destiny.

Imarvaluk, an Inuit girl of the Iñupiat people in the north of Alaska, tells of her fears and nightmares surrounding an invisible creature that appears on most pages of Jacques Pasquet’s My Wounded Island, usually in light pencil, a kind of ghost haunting the girl and her home.

Because of the evil creature, a stand-in for climate change, Imarvaluk, whose name means “‘song of the waves,’ … no longer loves the sea.” 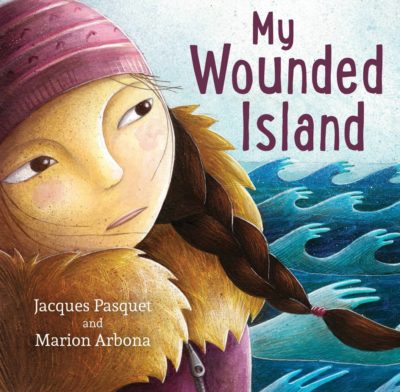 Her people spend their winters on the island of Sarichef, but probably not for long, with rising waters due to melting glaciers. Marion Arbona’s images help tell the story of a land that’s a perfect yellow-green in summertime, while dominated by swirling snowscapes in other seasons. There have been additions like snowmobiles and wood houses, but a way of life persists in which “the men still hunt bearded seals, walrus, elk and caribou.”

The village attempts to make some concessions to the sea – such as moving houses further inland – but the writing is on the wall. “What worries Grandfather the most is that this creature will make not only our island disappear but also the memories of our people.”

It’s not an uplifting book – nor should it be. There is the issue of where the people of the island will relocate to and who will pay for it: “My father would like us to work together to build a new village on the mainland. But it would cost too much, say the people who could help.”

The story also raises another important question – if we humans have set many places on track for destruction, how will we, at the very least, remember them and their inhabitants? mRb