A review of We Were Made for Each Other!How to Catch a Bear Who Loves to ReadThe Zombie PrinceUp the Mountain PathMustafaThe True Tale of a Giantess by Jiu Er and Julie NesrallahAndrew Katz and Juliana Léveillé-TrudelMatt BeamMarianne DubucMarie-Louise GayAnne Renaud

There is something fundamentally sad about giant creatures – the outsized outsider, often beset with health problems and treated cruelly. But they are also, of course, special, as in The True Tale of a Giantess: The Story of Anna Swan, which is about an almost eight-foot-tall Canadian who lived in the 1800s. 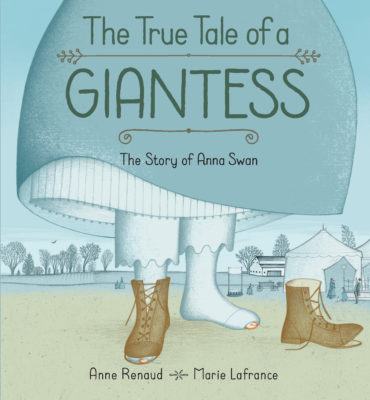 Author Anne Renaud gives Swan a voice to tell her own life story. The first-person choice seems right for a woman who endured gawking and was the topic, rather than the participant, of many conversations. Renaud offers instructive comparisons between Anna and items from her rural Nova Scotia landscape: “By the time I was twelve, I had risen higher than the hollyhocks that crowded our garden. Higher than our cows and horses. Higher than three bales of hay.”

Anna is a brave young woman – “I dream of a life as big as me” – and she convinces her parents to let her move to New York City to share her uniqueness with the world. Her adventures are told in concise poetic wording, and images transport readers back in time with evocative skies and lively historical details.

It’s not at all bad for Anna, who finds love, travels the world, and counts the Queen of England as a friend, but Renaud hints at the hardships she must have endured and at the difficulties of literally not fitting in: “On happy days, I did not have to squeeze into my world. Outside was my favourite place to be.”

From beloved author and illustrator Marie-Louise Gay comes Mustafa, a tale of a boy finding his way in a new country.

Mustafa’s experiences of his new home are told mainly through his visits to the local park, where “the air smells green and cool.” Some things look like they
did in his old country, others are new. He has a special interpretation of his new world, showing the value of fresh eyes. “The next day, Mustafa sees shiny red bugs with black spots. They look like jewels.”

All the mixed media illustrations are expertly crafted with pleasing details and textures, but an opening sequence of a watercolour moon in its different phases depicting the journey of Mustafa’s family to their new home is especially beautiful. Leaves are vibrant, dense scribbles made with
the brightest orange crayon for Mustafa’s first fall, accurately conveying the incredibleness of the season.

It’s heartbreaking to watch Mustafa feel ignored in his new country, but slowly, despite a language barrier, he makes a friend, and a kind of healing process begins, in part through drawings. Small gestures can help a person feel at home.

In seasoned illustrator and author Marianne Dubuc’s Up the Mountain Path, aged and adorable red-cheeked Mrs. Badger lives an enviably simple and aesthetically pleasing life, which every Sunday includes a walk up the mountain. On her walks, she meets her animal friends and admires and collects natural items like mushrooms. Most of the enchanting pencil and watercolour illustrations depict the weekly walk, but others zoom in on the treasures found, with labels too.

Up the Mountain Path
Marianne Dubuc

Mrs. Badger meets a young cat, Lulu, who is interested in, but intimidated by, the top of the mountain. (“I’m too small,” she protests. Perhaps here Dubuc is referencing children’s commonplace lack of enthusiasm for long walks?)

Lulu finds her figurative walking shoes and learns all about the path over many journeys. There are lessons, too, whose value extends beyond the trail. How small do you feel at the top of the world? “Small as a speck of stardust shimmering on the morning dew,” says Mrs. Badger.

They are not the only ones on the path, which is important when Mrs. Badger must retire from her climbs up the mountain. Lulu herself passes on the secrets and treasures of the path, and readers will be glad they too are along for the meditative walks.

The incident that sparks Matt Beam’s The Zombie Prince occurs before the book starts. Instead, the focus is on what happens next. Three boys gather in a schoolyard after one of them, Brandon, has been called a fairy by a classmate. Information about the incident isn’t shown directly, but must instead be deduced, giving the bullying less weight and space. 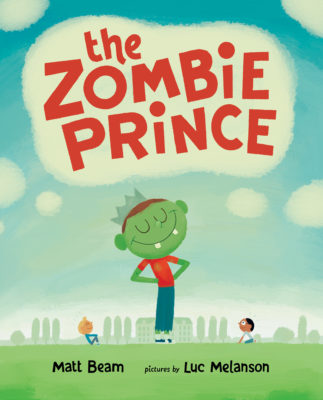 Together words and images set the scene of a lazy, sunny afternoon. Direct yet poetic writing describes the three boys hanging out, mulling over what happened. “Brandon’s eyes go bright and then dark and then bright again, as a cloud above moves past the sun in a hurry.”

Simple colourful illustrations help fill out the imaginary. Oscar declares himself a ghost who “next time […] will float invisibly in front of Brandon and block the mean words.” Our narrator is a vampire: “I suck bad things from the air […] that’s why my front tooth is missing. See?” And Brandon is dubbed a zombie prince. Details move deftly between the real and the imaginary, blurring the two.

The friends can’t totally fix their friend’s hurt, but with a little empathic imagination they’re able to show solidarity with Brandon. “‘Yeah,’ he says finally. ‘A zombie prince—I like that.’”

Julia is already friends with a skunk, a squirrel, and a groundhog, but she’s on a mission to grow the group in Andrew Katz and Juliana Léveillé-Trudel’s How to Catch a Bear Who Loves to Read. (Certain readers may especially enjoy the recurring fart contest involving Frieda, the skunk.) 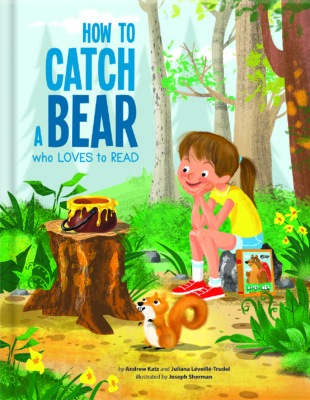 Collage-like, layered illustrations depict the forest with cartoony characters, photorealistic blueberries, and blurry, impressionistic foliage. Written descriptions fill out the effect: “The trees whooshed gently. The dappled light, sweeping around in the leaves, began to dim.”

This how-to story is also an adventure, and tension mounts as the friends track Bertrand, the bear: “Julia’s heart went BA-BOOM as she took a step forward.” When they finally meet, a love of books seals the friendship. “There’s a lovely reading spot out on the porch,” says Bertrand, and the two new friends settle into comfortable-looking chairs perched outside his tree house to finish a book.

Little Sun is a pig with many thoughts. Each two-page spread in Jiu Er and Julie Nesrallah’s We Were Made for Each Other! presents one of these quasi aphorisms with a drawing or two. They range in subject matter from a tale about Little Sun’s life to pieces of advice, or even short stories. Some are addressed to Little Mouse, Little Sun’s best friend. 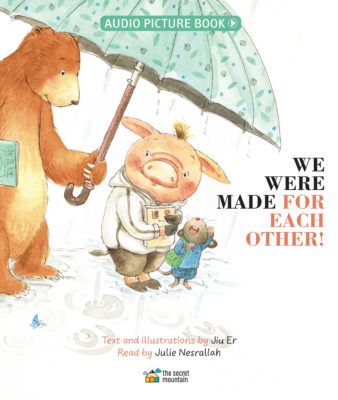 We Were Made for Each Other!
Jiu Er and Julie Nesrallah
Translated by Alexandre Zouaghi and Helen Roulston

These wisdoms were originally published in Chinese, and readers can listen to a recording of the English translation, read by a strong, clear female voice.

Although the thoughts seem disconnected and don’t follow a plot, there are recurring characters, as well as themes of art, love, and happiness:

Life is also about asking questions
and wondering about things.
But there’s no doubt
that the more you question,
the harder it is to see clearly!

Other pages are left open-ended, including the meta moment when the author appears with a broken heart and Little Sun can do little to help her.

Watercolour drawings add to the stories with carefully considered details, such as Little Sun up on a high ladder in front of a blank wall with his paints. Little Mouse has an idea:

If you really don’t know what to draw,
Little Sun, why don’t you come down
and play for a while?

It’s consoling to know even prolific Little Sun sometimes has a block. mRb