A review of Under PressureMy Mommy, My Mama, My Brother, and MeThe Boy Who Invented the PopsicleJust BecauseSongs in the Shade of the Cashew and Coconut Trees by Tanya Lloyd KyiNatalie MeisnerAnne RenaudMac BarnettSongs collected by Nathalie Soussana, Musical arrangements by Jean-Christophe Hoarau

Songs in the Shade of the Cashew and Coconut Trees, a stunning collection of transatlantic lullabies, lies at the intersection of many disciplines, including fieldwork, musical arrangements, illustration, anthropology, and writing for children. A work that will delight adults and kids alike, it features twenty-three lullabies from West Africa and the Caribbean. Spanning a vast area from Cuba and Haiti to Ghana and Angola, this book illustrates the historical and cultural links between these places, created by the transatlantic slave trade, by pointing to their shared musical styles. As one passage explains, “Lullabies, nursery rhymes and traditional songs are more intimate than historical memory, revealing a people’s way of life, desires and imagination.” It is thus an invitation to “travel” to these countries and catch a glimpse of life at its most intimate – in the songs that shape the early lives of children. 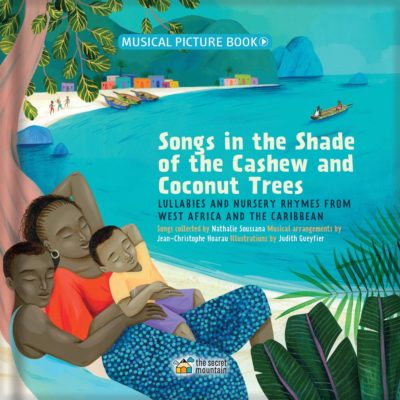 Songs in the Shade of the Cashew and Coconut Trees
Lullabies and Nursery Rhymes from West Africa and the Caribbean
Songs collected by Nathalie Soussana, Musical arrangements by Jean-Christophe Hoarau
Illustrated by Judith Gueyfier

Each song features a breathtaking illustration by Judith Gueyfier alongside a line or two of lyrics, collected by Nathalie Soussana. The scenes are rich and inviting, and while the words do not contain clearly defined narratives, the images offer a wonderful opportunity to build impromptu stories with young readers.

The book also comes with a CD (or a digital download link), either for listening along while flipping through pages or enjoyed on its own. The selected songs represent a wonderful collection of music, featuring traditional instruments beautifully arranged by Jean-Christophe Hoarau.

While the first half of the book serves to illustrate the songs, the second half explains the connection between West Africa and the Caribbean in a way that is appropriate to young audiences. It also includes notes about the languages heard and the role of music as the link between disparate cultures. THe lyrics of each song, in the original language and in English translation, are accompanied by an explanation of the story they tell and their cultural context.

Songs in the Shade of the Cashew and Coconut Trees will please everyone from small children to folklore scholars to world music enthusiasts – a gem of a book.

At some point in the process of raising young ones, parents become intimately familiar with the question: “Why?” Particularly around the preschool age, children set off on a path of wonder and amazement that has them demanding constant explanation of the world from any and all nearby adults. Just Because, a playful new book by Mac Barnett, illustrated by the incomparable Isabelle Arsenault, leans into the interrogation process. More than merely calling on us to appreciate children’s constant questioning, this book celebrates adults who find inspiration in answering. 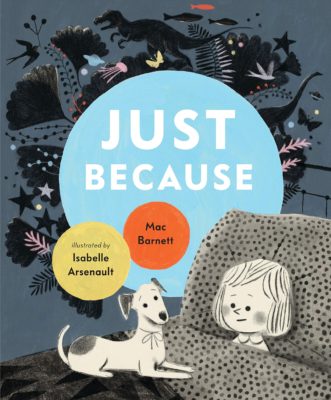 Just Because takes place at bedtime, with a child wondering, “Why is the ocean blue?” Rather than reaching for a scaled-down version of a scientific explanation, the father chooses a poetic one: “Every night when you go to sleep, the fish take out guitars. They sing sad songs and cry blue tears.” The text is sparse and the illustrations rich, offering a slow, meditative read perfectly suited to spurring on the kinds of outlandish conversations that are the upside of all that inquiry. With Barnett’s wit and Arsenault’s signature blend of whimsy and gravity, light and darkness, readers big and small are invited on a voyage through dreamy scenes of childlike imagination. 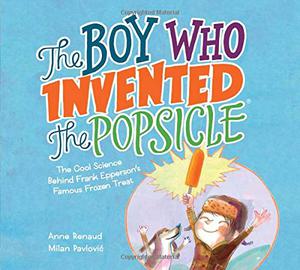 Anne Renaud’s The Boy Who Invented the Popsicle is a delightful book that follows the story of Frank William Epperson, inventor of the Popsicle. The story begins with a glimpse of his life as a young boy growing up in Northern California, where his curious mind was given free rein. His childhood dream of becoming an inventor led Frank to various projects, from creating a small vehicle to perfecting a series of fizzy drinks – the latter eventually leading to what we know as the Popsicle (originally called the Epsicle). Interwoven within this narrative are informational pages with small-scale science experiments to perform at home. Among them, readers will find fun activities that range from a simple oil-and-water mix that shows the molecular difference of liquids to an actual frozen treatmaking experiment that displays how salt lowers the freezing point of ice and allows sugary mixtures to quickly solidify. With excellent pacing, the complexity of the story’s science increa es as the plot advances.

Accompanied by Milan Pavlovic’s bright illustrations that pop off the page, this is an ideal book to share with any budding natural science enthusiast or fan of frozen treats! 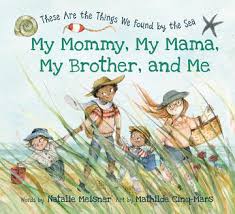 My Mommy, My Mama, My Brother, and Me
Natalie Meisner
Illustrated by Mathilde Cinq-Mars

[dropcapI][/dropcap]n a seaside town, after the morning’s peasoup fog has lifted, two children set off on an adventure to the beach with their moms in tow. The story of Natalie Meisner’s My Mommy, My Mama, My Brother, and Me unfolds through the refrain of the day’s findings – from a mermaid purse and some fused glass to strange-looking sea creatures and new friends. With a sing-songy text of loose rhymes and Mathilde Cinq-Mars’s homey watercolours that perfectly capture the palette of a Nova Scotia fishing village, this book brings readers into a world of childhood discovery. The kids and their moms encounter a variety of the town’s residents, who each have something to share. Navigating this world of colourful characters allows readers to gain some fun facts about a fascinating environment, while reinforcing the message of community. Based on playwright Meisner’s own “two-mom, two-son” family, this lovely story celebrates all the best aspects of family togetherness – love, exploration, and navigating the world together.

It’s no secret that the current generation of adolescents and teens is mentally over- taxed. The main problem plaguing them? Stress. With overwhelming expectations and a digital environment that never allows them to unplug from their stressors, we are seeing more and more reports of depression and anxiety in young people than ever before. 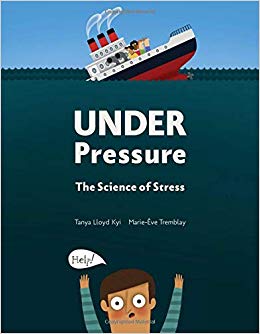 In Under Pressure: The Science of Stress, Tanya Lloyd Kyi has documented the science of stress – what it is, where it comes from, and why we still deal with it at this relatively comfy stage of human evolution – with a tone and examples appropriate to a younger audience. This book is a helpful resource for any reader – adolescents, parents, educators, counsellors – seeking to understand the concrete processes that human bodies and brains undergo in stressful situations. Furthermore, it deals openly with issues that many young people face but that few will report – from small stressors like schoolwork overload to weightier issues like PTSD following traumatic incidents.

With colourful illustrations by Marie-Ève Tremblay that lend some levity to a difficult subject, it’s an excellent example of a neutral approach that does not dramatize stress but simply presents the science of what it is. It’s surprising that a book about this particular topic would not give space to one of the major producers of stress, anxiety, and depression kids face right now: digital culture and social media interactions. However, the scientific facts that it focuses on are certainly transferable to any situation – digital or IRL.mRb