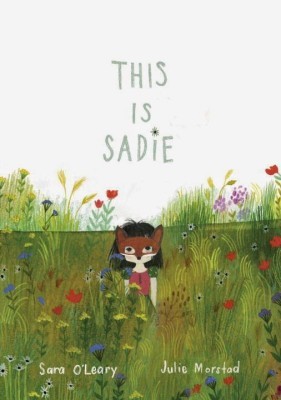 This Is Sadie
Sara O'Leary
Illustrated by Julie Morstad

With the picture book This Is Sadie, Sara O’Leary and Julie Morstad team up to introduce us to a girl of great imagination. Rather than plotting a linear storyline for her heroine, O’Leary offers us a character sketch of a girl uninhibited by adult limitations. From the moment Sadie wakes up in the morning, her hammer and nails are out on her bedroom floor and she begins to make “boats of boxes and castles out of cushions.” Her play is all-consuming at the same time as being carefree: she floats from swimming under the sea with a mermaid, to howling alongside a wild dog, to clinking tea cups with the March Hare – all within a morning, one suspects. Morstad’s airy gouache and ink illustrations nicely complement Sadie’s fleeting interests. There’s nothing threatening in the artist’s renderings of imaginary realms, where even wolves and leopards look approachable, and the night is a calm green-blue illuminated by glowing fairy wings and moonlight. Sadie herself, with her untameable black hair and twirling skirt, is endearingly painted. Yet O’Leary encourages more than detached admiration of Sadie’s child-led antics, inviting young readers to reassess the normal in their own lives: “Sadie has wings, of course,” the narrator reveals. “She can feel on her back where they are starting to grow. Maybe you have them too. Have you checked?” And what is Sadie’s favourite tool for building alternate worlds? A tool accessible to any child? “Stories, because you can make them from nothing at all.”

Many a parent reading a traditional fairy tale aloud to their child will not take long to notice the stories’ frustrating portrayals of gender. Young audiences, too, remark on injustices, such as a princess too powerless to construct her own destiny. Which is why Davide Cali’s latest title, Snow White and the 77 Dwarfs, comes as a humorous tonic. The picture book begins at the moment when Snow White, fleeing an evil witch, is offered shelter by the dwarfs on the condition that she help with chores – a task made quite challenging in this retelling given the sheer number of little men. Raphaëlle Barbanègre fills the pages with bold colours and chaotic backdrops to emphasize the new calamity in which our heroine finds herself as she navigates such daily tasks as clothes-washing (seventy- seven dwarf hats criss-cross the page on an infinite laundry line), breakfast-making (another seventy-seven hands reach out with an amusing variety of mugs for their morning coffee), and “beard maintenance.” Young readers will especially delight in the two-page spread in which Snow White tries to absorb their various nonsensical names (Pillow, Hokey-Pokey, Topinambour, Kerfuffle…). Finally, receiving no help from the bearded cherubs who are more like children than men, the protagonist opts “to take her chances with the witch” and willingly eats the poisoned apple. Her empowerment is questionable if a coma or domestic enslavement are her only choices, but Cali is aiming for laughs, and in this he succeeds. 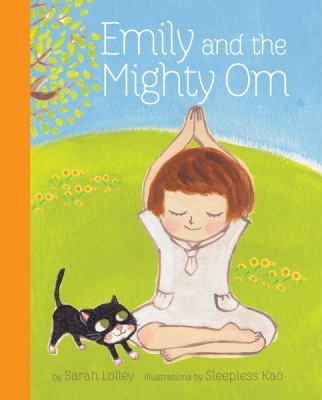 With Emily and the Mighty Om, Sarah Lolley taps into the recent trend of kids’ yoga with the tale of a girl who helps a yogi resolve a difficult problem. Emily is entranced by her new neighbour, a beard-tugging elderly gentleman by the name of Albert who appears on his front lawn each afternoon to do his yoga routine. More curious than the bizarre positions he achieves is his concluding “om,” which he explains is “a magic word that everything understands – people and animals, trees, even rocks.” One day, Emily returns home to find Albert stuck in a complicated asana on his front lawn, unable to speak. One by one, passersby stop to offer their frantic suggestions for what he needs, but it is Emily who remembers the words of her elder and leads them in a collective chant that cuts through the tension and re-establishes the calm that Albert needs to pop out of his pose. Sleepless Kao’s paintings use calming, spring-like colours in a natural setting and simple figures to reflect the serenity of the om. Not only is Lolley’s tale a useful narrative means to inspire scattered children to redirect their energies into observation and inward gazing, but the story’s broader message tells us that even the youngest and the smallest among us have the capacity to teach. 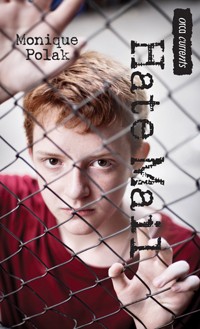 Prolific YA novelist Monique Polak has penned a compelling read with Hate Mail, which uses a suburban Montreal-area high school as the platform for examining prejudices surrounding autism. Protagonist Jordie thinks his plate is sufficiently full trying to be cool enough to attract the attention of his classmate Samantha. When his autistic cousin, Todd, begins attending the same school, suddenly life gets a lot more complicated. Seeing how his peers react to Todd’s unconventional behaviour, Jordie hides the fact that they’re related: “What would it be like,” he wonders, “to have a normal cousin? … Sometimes, it sucks to be me.” Jordie is aware of the unfairness of Todd’s treatment, but he is silent about it, which Polak stresses is just as cruel as the taunts. Polak developed Hate Mail as a writer-in- residence at a school much like Jordie’s, integrating students’ ideas and feedback into the chapters as she progressed. This shows her ability to recreate a setting true to life. She’s also deft at informing readers about autism – explaining behavioural patterns, for instance – without lapsing into lecture mode, using Jordie’s voice instead. We see the development in Jordie as he shifts his focus from concern about his friends’ opinions to concern for his cousin’s well-being, especially after Todd’s parents receive a hateful letter about their son. Hate Mail concludes with Jordie respecting Todd’s differences, and with the school touting their former outcast as a hero after Todd’s obsession with planes leads to Samantha’s rescue. Polak’s well-paced novel encourages teen readers to consider the prejudices at play in their own lives, and to find the courage to stand up for what they believe is just. 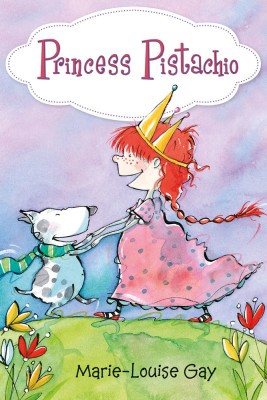 Those who have graduated from Marie-Louise Gay’s endearing Stella picture book series will be ex- cited to learn of a new series by the same author, penned for early readers and now available in English. Princess Pistachio features a feisty girl – portrayed with red braided hair reminiscent of Pippi Longstocking in lively pen-and-ink drawings – named Pistachio who is convinced that she is a displaced monarch from Papua being raised by mere commoners masquerading as her parents. On her birthday, she is delighted to find an unsigned card ad- dressed to “my little princess” and a package containing a golden crown, which she regards as proof of her entitlement. Her parents, however, are more interested in getting her to eat her creamed spinach, while her younger sister Penny wants to join in the play-acting. Pistachio finds no support at school, either, despite showing up to class dressed in full regal garb. When the mystery of the card is revealed, a disappointed Pistachio lashes out at her sibling and has to redeem herself when Penny goes missing. 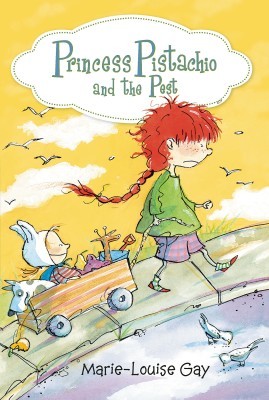 The second book in the series, Princess Pistachio and the Pest, places more emphasis on the contentious rela- tionship between the sisters. Pista- chio’s mother charges her to take Penny to the park, but Pistachio wants nothing more than to spend her first day of summer vacation exploring with her friends, and so it’s with much grumpiness that she drags her sister and laden wagon down the street. The morning has its own share of adventure, however, with the girls facing a slew of obstacles on their way to the park. Certainly there are commendable features in the two books, including Gay’s creative use of colour to portray emotion, but overall the stories seem unpolished, the text stilted. The characters are often unpleasant to each other without being corrected (not just sister to sister, but “friend” to friend, even parent to child) and there’s a whole lot of shouting going on. Gay’s fans may find themselves yearning for a return to the throne by the kinder, more inspiring Stella. mRb
Andrea Belcham lives in Saint-Lazare, where many of her best neighbours are trees.