Hilary Grist is a quadruple threat. This singer/songwriter is also a children’s author and illustrator. She showcases all of these talents in Tomorrow is a Chance to Start Over, a picture book that comes with a CD of original dream songs. In the picture book, Isabelle and Ira are two children who just can’t fall asleep. Grist’s two clay creation protagonists go on a journey through the noisy city and onto a tiny sailboat. They drift along and land on the shores of a magical island. They learn to fly. This incredible journey culminates with a cozy return to home and bed and the promise of a new day and fresh beginnings. 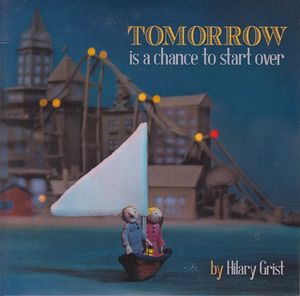 Unfortunately, Ira and Isabelle have the same worried expression on their static clay faces from the beginning to the end of the book. The digital photography effects are rather rough in places and we are distracted, rather than delighted by the images. But the treasure here is the accompanying CD of dream songs. Grist’s songwriting and singing take her listeners on flights of fancy and onto lovely slumbers. These songs make the visual representations in the book unnecessary because the music stands on its own. Grist is already a successful indie musician who tours the world and who has placed her songs on shows like Grimm and Degrassi: The Next Generation. Let’s hope that the CD, Tomorrow is a Chance is Start Over, is an indication that this talented woman is now focusing on building a fan base in the under-ten demographic. 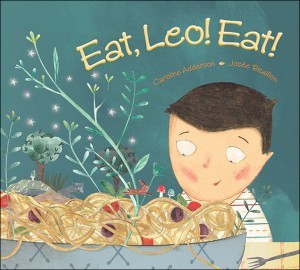 As more baby-boomers joyfully achieve grand-parenthood, we’re seeing lots of releases that feature a strong grandparent figure. This time it’s Nonna, Leo’s grandmother, who has us eagerly turning the pages in Caroline Adderson’s latest, Eat, Leo! Eat! Leo is every Nonna’s nightmare, a grand-child who won’t eat her delizioso Sunday family lunch. But because grandmothers are both resourceful and wise, Leo’s Nonna devises a way to get Leo to the table. Not only does she manage to entice him to mangiare, she also makes sure he’ll be back the next Sunday for more. The pictures by Josée Bisaillon, especially the ones that illustrate the stories Nonna tells about the pasta she serves, are lush and rich, almost good enough to eat. The book features an end page with an informative paragraph and drawings of more than ten kinds of pasta labelled in Italian with English transliteration. This release would be an excellent choice for a child who has a real Nonna in their life. The depiction of a warm, noisy, and extended Italian family is respectful and celebratory. Nonna is a fictional grandmother who proves herself quite capable of taking charge and getting the job done.

Writer and illustrator Marianne Dubuc is probably best known for her very successful In Front of My House. That book has been published in thirteen countries around the world. Dubuc’s latest release, The Bus Ride, is about leaving the house behind and taking a trip on four wheels. Clara is embarking on her first solo voyage on the bus that goes to Grandma’s house. Because she is cheerful and well equipped with snacks and sweater, she can enjoy the ride as well as her furry, feathery, and friendly co-passengers. Owls in wide-brimmed hats and calico dresses, mama moles in kerchiefs, and sloths that snooze for the whole trip; these are just a few of the animals Clara comes across on her adventure. The drawings are lovely and colourful, both delicately executed and full of bold intensity. Dubuc has managed to create a whole world inside the bus, a universe that we imagine existed in good old days, when children were allowed to take a bus ride without cellphone monitoring. 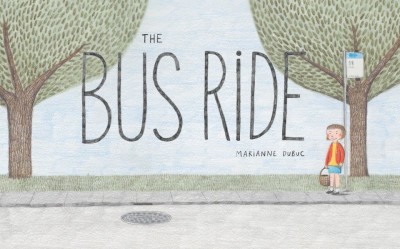 Where The Bus Ride disappoints is in the text. The book was originally written in French and the English version is flat and not pleasing to read aloud. The strength of this picture book and the reason one keeps turning the pages, is the visual narrative Marianne Dubuc develops and sustains throughout. Fascinating creatures come and go, the bus navigates through leafy forests and dark tunnels, and Clara mysteriously changes places without meaning to. Dubuc draws the kind of pictures that could very well keep a squirming pre-schooler happy on the bus ride home from another long day at daycare.

In The Traveling Circus, long-suffering Charlie is being dragged on yet another family holiday. This time Charlie, his little brother Max, and his adventure-loving parents are off to Croatia. Since the co-creators of the Charlie and Max travel books are married and parents to two boys in real life, it’s fun to speculate about how autobiographical these stories are, especially when we learn that the mother in these chapter books is prone to sketching everything she sees and the father can’t stop regaling his family with historical details that he alone seems to find interesting. 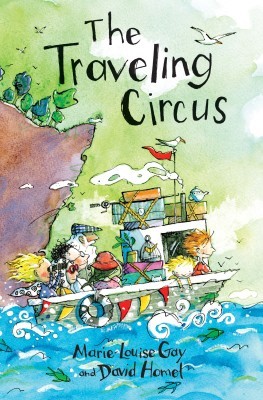 Marie-Louise Gay and David Homel are to be commended for taking their fictional family to a part of the world that most travellers know very little about. Here we learn about the beauty and richness of this fascinating Mediterranean region. Amidst encounters with fierce old Dalmatian ladies wielding wheel- barrows, death-defying fishing trips, and hairpin turns on goat-strewn mountain passes, Gay and Homel manage to fit in a discussion about what war does to families, communities, and countries. Too bad that Charlie’s first person point-of-view sometimes falls flat, his revelations about the casualties of war and the importance of family sounding less like the thoughts of a pre-teen and more like the opinions of a world-weary adult who has been around the block a few times. Gay’s distinctive illustrations, as seen in the award-winning Stella series of picture books and countless other places, are charming when they appear in colour, but the black and white images included in The Traveling Circus do little to enhance or illuminate the text. While Gay and Homel’s personal relationship is an inspiring example of how married artists can creatively collaborate, The Traveling Circus does little to reveal the true talents of these well-respected members of the Quebec literary community. 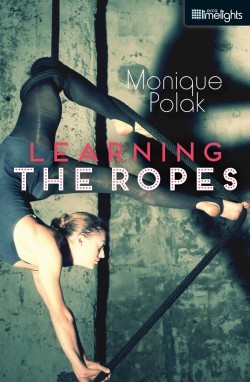 In Learning the Ropes, we meet fifteen-year-old Vancouverite Mandy, who has always loved the circus. Despite her father’s misgivings, she plans to be a professional aerialist and rope climber one day. Mandy is finally on the way to realizing her dreams when she is accepted to Montreal Circus Camp. In Montreal, she immediately meets Genevieve, another aerialist, who does tissu, a performance art that involves climbing long strands of brightly coloured Lycra. Although Mandy needs a friend, only one aerialist will ultimately be chosen from the circus campers to attend the prestigious Montreal Circus College. Mandy encounters a wide variety of aspiring circus performers from around the world at circus camp: Hana, an acrobat from Korea; Anastasia, a Russian trapeze artist; and Cécile, a tightrope walker from France, to name a few. The plot is well structured, although some events, such as the visit to a Cirque de la Lune performance, add nothing to the story. With her strong dialogue and consistent narrative voice, Monique Polak succeeds in convincing the reader that a fifteen-year-old really is telling the story. It is an original idea to write about the circus. Most books about the performing arts describe more conventional disciplines such as singing, dancing, and acting. But even if the YA reader is not interested in circus arts or gymnastics, this book is still a guaranteed fun read. mRb
B.A. Markus is a writer, performer, and performer living and working in Tiotia:ke/Montreal.