Melanie Florence’s Stolen Words is a modern story, a hopeful exploration of one way the Cree people may begin to reclaim their language and culture. The stolen words of the title refer to the practice in residential schools of forcing all First Nations children, including the Cree, to speak only the white person’s languages. “They took our words, locked them away; punished us until we forgot them, until we sounded like them,” Melanie Florence writes. 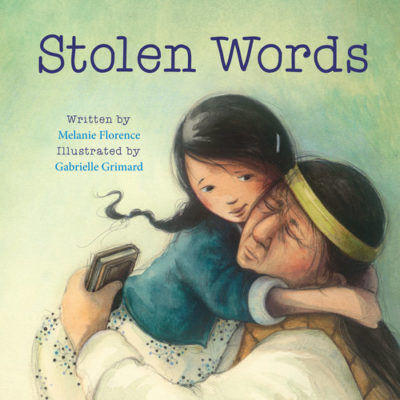 The author, who is of Cree and Scottish descent, dedicated the book to her deceased grandfather and to the idea that a healing relationship between generations can lead to positive change. While the story of how the Canadian government destroyed the lives of First Nations children is harsh, the subject is handled with dignity and love. The emphasis is on how children can help their elders heal rather than on the pain and abuse. The illustrations by Gabrielle Grimard are suffused with warm tones of yellow, green, and brown, the lines playful and full of movement.

Like Stolen Words, Jan Bourdeau Waboose’s The Spirit Trackers is a modern story that has clear connections to First Nations culture and history. In fact, The Spirit Trackers is two stories in one book. One story is the tale of the northern Windigo: The Wandering Spirit of the Winter. The second story is about what happens when two young boys visit their uncle and decide they are ready to follow the family tradition and become trackers. The character of the uncle connects the two stories, one ancient and one new.

The uncle’s terrifying description of the Windigo both horrifies the boys and galvanizes them into action: “It has a heart of ice and its teeth are like steel. It will eat anything in its way.” Despite the strange sounds they hear and the unsettling shadows they see during a sleepless winter night, the boys put on snowshoes and dare to venture out in search of the Windigo. They find more than they bargained for, and in the process learn about themselves and their ancestors. 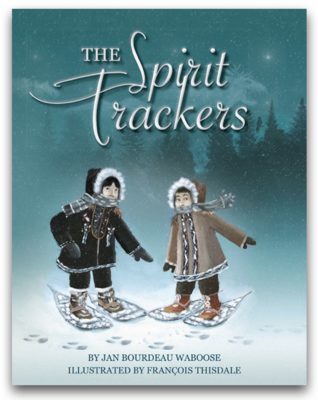 A well-respected illustrator and winner of multiple awards, François Thisdale showcases his unique blend of drawing, photography, digital imagery, and printing in The Spirit Trackers. The artist’s technique, already impressive, is only getting better and better. The expressions on the boys’ faces are hilarious, and the textures of snow and hair sparkle and pop, almost appearing to be three-dimensional.

The moral of the Anishinaabe tale the uncle tells about the Windigo remains relevant to all of us who occupy this wintery province. Respect and honour The Wandering Spirit of the Winter, because it is more powerful than mere humans will ever be.

In 2011, inspired by something he saw during a visit to the Montreal Holocaust Museum, filmmaker Carl LeBlanc released a critically acclaimed documentary called The Heart of Auschwitz. What he saw was a daisy-sized, heart-shaped card that unfolded like an origami flower to reveal the messages written inside. The cover was made of purple fabric and embroidered with an orange F on the cover. The F stood for Fania, who was the twenty-year-old recipient of the gift. The nineteen messages inside were written by Fania’s friends, all of who worked beside her as slave labourers in the Weichsel-Union- Metallwerke and, like her, were prisoners in one of the Nazi’s most infamous death camps. 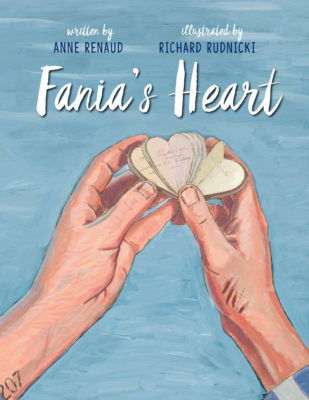 Holocaust historians have said it would have been impossible for the women who signed the card to have made this intricate heart-shaped gift. They’ve also said that Fania could not have hidden the card from the camp guards or concealed it during the death marches. And yet, the card remains, a tactile testament to resilience, survival, and love.

Anne Renaud’s Fania’s Heart tells the story of the heart-shaped card from Fania’s perspective. The story is an explanation to Fania’s young daughter, who finds the card in her mother’s drawer and asks to hear the story of where it came from. As Fania explains, the card is important both on a personal level and as a symbol of the unbelievable power of friendship, loyalty, and courage. Given the content of the story, which goes into detail about the conditions at Auschwitz, and the amount of text on each page, Fania’s Heart is appropriate for older kids. The illustrations are reminiscent of drawings from the 1950s, intended perhaps to invoke the era when Fania’s daughter originally found the card. And for children and adults who are interested in this amazing story, you can watch Carl LeBlanc’s wonderful film or head to the Montreal Holocaust Museum and see this inspiring object for yourselves. 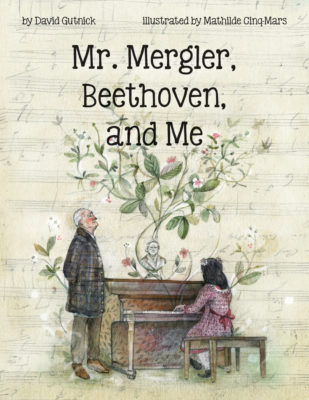 Something magical happens when music brings people together. In David Gutnick’s Mr. Mergler, Beethoven, and Me, a common love for the piano results in a friendship between two unlikely strangers. Mr. Mergler is a seventy-six- year-old bachelor and piano teacher. His new friend is a young child who has recently arrived from China. The girl, who remains unnamed in the book, has already taught herself to play piano but knows her immigrant parents can’t afford to pay for her lessons. After a chance meeting in a city park, Mr. Mergler agrees to teach the enthusiastic girl for free. Despite their differences in age and life experience, the two share a profound love of classical music that transcends time and place.

Cinq-Mars’s illustrations, in gentle shades of green, gold, and pink, do a beautiful job of weaving musical symbols and luxuriant foliage together on every page. The student’s playing produces a verdant entangling of vines with green leaves and bursting petals laid over a sheet of faded musical notation paper. The girl zooms home when she finds out that Mr. Mergler will teach her, her bicycle wheels following the curving lines of a musical staff – she leaves a trail of notes that stretch behind her all the way back to her new teacher. This is a sweet story about the transformative power of music. Readers who are interested can also check out the film version of this true story on the National Film Board website under the title Mr. Mergler’s Gift. 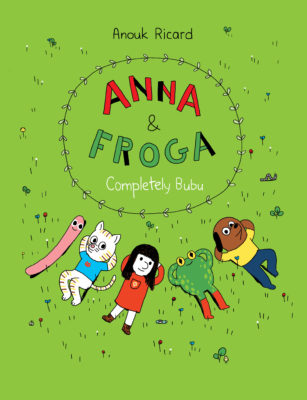 For the first time, publishing powerhouse Drawn & Quarterly has put together the definitive collection of Anna and Froga comics. Originally issued as five shorter books, the comics are now brought together so readers can indulge in 210 pages of non-stop fun. Anouk Ricard is both writer and illustrator, and her deceptively simple-looking drawings manage to create a whole universe. Children will love picking out all the quirky details, from the tiny insects to the sheer variety of flowers and plants that fill this silly world. Stories that talk about poo, extol the pleasures of hitting things with sticks, or reveal what to do when a werewolf moves in next door are sure to entertain both kids and the adults around them. Ricard has also included fullpage cartoons after each story that add to the fun. A surefire hit for fans of Anna and Froga who want what they love in one place and a great introduction for readers who haven’t yet experienced the pleasures of Ricard’s charming universe. mRb
B.A. Markus is a writer, performer, and performer living and working in Tiotia:ke/Montreal.