A review of ZIPPO by Mathieu Blais & Joël Casséus

You grabbed my hand and we fell into it, like a daydream or a fever.
– Godspeed You! Black Emperor

The 2001 Summit of the Americas has been all but erased from our collective memory. It was the day that the leaders of the thirty-four countries of the Americas met in Quebec City to discuss free trade. Roughly 30,000 protesters marched to meet them only to be greeted by the longest walled perimeter ever erected for trade negotiations at the time. The message sent to civilians was clear: you are not part of our meeting and here are thousands of tear gas canisters to prove it. 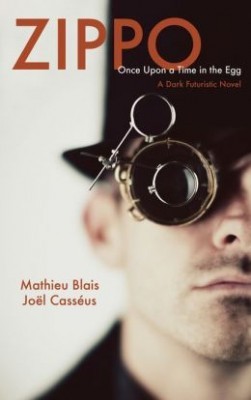 In the few years leading to the Third Summit of the Americas in 2001, and especially because of the 1999 Battle of Seattle, hope pervaded and a real global movement made the case for a united universal citizenry.Through effective protests and by using the Internet as a tool for grassroots mobilization, this citizenry rose up against a violent economic model. Then the Twin Towers fell and we were shrouded in darkness for seven years.

ZIPPO: Once Upon a Time in the Egg, by Mathieu Blais and Joël Casséus, is set during a version of the Summit of the Americas in Villanueva, a modern dystopian version of Quebec City ruled as a totalitarian police state. It excels in retelling that hopelessness and in detailing the carnage of a society that has dehumanized itself. In ZIPPO, people are literally treated like garbage, it is a future where humans have been turned into complete commodities. The book is a faceless, sombre massacre. Like a skull crushing, the novel makes a horrid sound.

Citizens of Villanueva have a wide array of deaths at their disposal – the Brown Plague, guerrilla warfare, garbage trucks, violent rape, the macoutes (police), not to forget a meteor that is about to smash into Earth at any given moment – which makes readers wonder why people are still going through the motions of killing each other if they’re on the cusp of being wiped out. It’s all so senseless. And that seems to be the point. Blais and Casséus want readers to feel humanity at its most absurd and bloodthirsty, to transmit their sentiment of powerlessness and to portray the cruelty of a police state. They want readers to taste the tear gas in the morning.

Unfortunately, this is an anti-novel with an anti-ending and an anti-anti-hero, Kahid. Kahid is a reporter covering the ZIPPO (the meeting of which we learn less and less as the novel progresses) and he is using his investigative skills to find out if he himself murdered his best friend and lover A***. His plight isn’t well served by an intrigue that is not sustained in a book that has no plot. Even Kahid himself often appears disinterested in his own story. ZIPPO tries to get to the heart of the matter by foregoing a story altogether. It’s a courageous experiment, but without a story, morbid descriptions and fleeting characters are left alone and the reader is left wondering why ZIPPO is not a gripping short story instead of a drawn-out novel. For there to be true darkness in a novel, there must be light, otherwise there is no contrast.

That being said, ZIPPO remains a testament to powerlessness and shrewd police state tactics. Props go out to Kathryn Gabinet-Kroo who successfully translates French sonorities into the English text.

Luca Palladino is a freelance writer living in Lachine. He loves writing dystopian novels and his favourite writer is Kafka, of course.