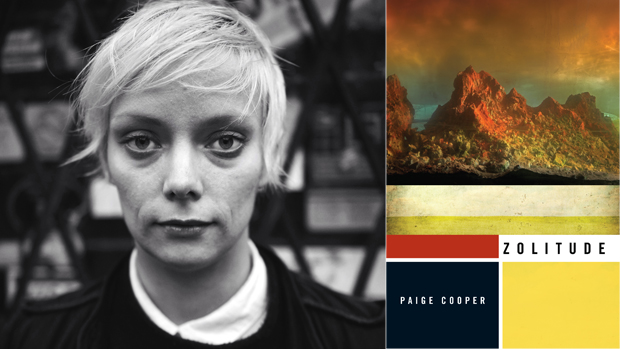 Montreal writer Paige Cooper grew up in Canmore, Alberta, a tourist town, so she learned from a young age to dislike tourists, but also to recognize the tourist in herself when she eventually moved away. This awareness gives her writing an expansive quality, no matter whether her stories are set in her hometown, in Latvia, or on Mars. Zolitude is Cooper’s first short story collection, but it reads like the work of a far more seasoned writer. Her stories are painful and wise, ugly and moving, and at their best, reveal uncomfortable truths about human connection and its limits. We meet up on a sunny January day at Dispatch Coffee in Little Italy, where, over the industrial thrum, we discuss ugly emotions, playing with genre, world-building versus world-blocking, and writing monstrous men.

Zolitude is startling in its range and scope. It’s not a themed collection, but Cooper’s ultimate aim is present throughout and serves to unify: “I’m often writing towards an emotion,” she tells me. “I’m trying to pinpoint the constructed world and the dynamics and aesthetics that will lead to a certain feeling.” The emotions that result are neither simple nor comforting. “The uglier the emotion, or the more complex, the more revealing it is,” Cooper says. Having decided during her BFA in Creative Writing that she did not want to write auto-fiction – though she admires those who choose to lay themselves bare in that way – she instead writes in a diversity of voices, across and through an array of genres.

I ask her where she finds inspiration, if her stories are not plucked from her own biography, and she paraphrases the painter Agnes Martin: “It’s important to, in almost a childlike way, sit around and wait for a mo – ment of surprise. You pay attention to everything, and wait for that one idea that seizes you. If you’re lucky, you get seized by two ideas at once, and though they may not immediately make sense together, you use that friction to generate a story.” Cooper uses this friction to great effect. In “Spiderhole,” a smug white Vietnam veteran rails against dinosaur tourism in Southeast Asia, but is unable to recognize his own colonial attitudes towards his surroundings; in “Moriah,” justice for sex offenders comes in the ancient form of a roc.

Some of this generative friction comes from Cooper’s flexible approach to genre. She was an avid reader of fantasy and science fiction as a child, and, though not a fantasy or science fiction writer herself, she boldly experiments with elements of myth, occult horror, space exploration, spy thriller, and adventure tales, all of it infused with her own poetic rhythm. Her influences range from Jack London to Angela Carter and Steven Millhauser, to Kathy Acker and Ottessa Moshfegh. 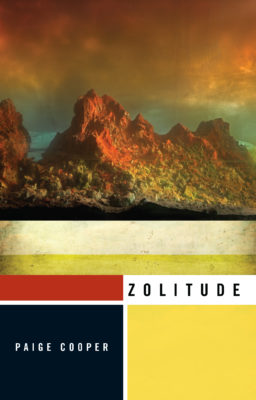 The stories in Zolitude are both unforgiving and generous. Each one drops the reader into the churning centre of things, with little explanation; we are provided with snippets of conversation and sensation, and must work to get our bearings. Cooper admits that the lack of clarifying detail baffles some readers, but she subscribes to the concept of “world-blocking” recently put forth by Tyler Malone in the Los Angeles Review of Books. “World-blocking is an alternative to world-building,” Cooper explains. “It’s more about the interface between the mind and the physical world; it’s about obscurity, a certain fogginess. Only so much can be known by a person at a given time, so the writer presents only a certain amount of detail, and the reader is left to fill in the gaps.”

The work we are required to do in this collection is welcome, ultimately, because of the generosity of Cooper’s language. She is just as adept at imbuing old myths with new life as she is at spinning descriptions of objects and processes into refractive poetry. In “Moriah,” I am spellbound by this passage about the roc’s offspring:

Her diamond egg, white enough to fall through, bright enough to snowblind, filled with an evil and naked creature that breathed warmly through its shell, utterly beloved.

In “La Folie,” the narrator describes her mode of transport – her frustration is palpable but the image is strangely gorgeous: “Her motorbike, she knows now, is not even a Honda, but a knock-off from China. The cube with aortic valves is a carburetor. The fingerling in the wheel well is a spark plug … the gas must be choked via a toggle deep in the beast’s phlegmatic chest.” Animals and their likenesses prowl the pages, adding to the tone of myth, without ever tipping the stories into the actual realm of fable. Their appearances are just brief and odd enough, natural yet inexplicable. A character’s pet snake is a “living noose with a yearning knob of brain at the end.” The audience at a frenetic concert is “shrieking like a bat colony.” The young sex workers taken in by a house mother in “The Tin Luck” are “an undersea pack of beaks and long arms … They devour whole nights at a time and spit out the unpalatable survivors.”

There is harshness to the stories as well. These are not tales of success or enlightenment – characters are often doomed to failure, accidents, misplaced love, and regret. They wrestle with their own shortcomings. A character in one story laments that, “there are some symptoms of himself that are hard to hide.” The death-avoidant time-machine inventor in “Thanatos” admits: “I have no money, but all of my cruelty is intact.”

Monstrous men are abundantly present in this collection. Cooper plays with the tension of representing gendered ugliness and violence by getting so close to it that the reader is uncomfortable with the implications of this proximity. “I am fascinated by how compelled I am by men and the power that they hold, and that leads me to question my complicity in that power dynamic,” Cooper tells me. She references Evan, the protagonist of “Retirement” – a one-time Olympic champion who has descended into self-pity, blaming and mistreating all the women in his life. “He sees himself as the victim. My current suspicion, especially with the Time’s Up movement happening at the moment, is that most of the men who have abused women see themselves as victims, explicitly now that they are being called out but maybe even when they were committing the acts themselves. I want to examine and peel that back, look at the self-pity that’s involved, the misery of that.”

In “Record of Working,” Cooper reimagines Jack Parsons, who was the head of the Jet Propulsion Lab at the California Institute of Technology (Caltech) in the 1970s, and also led a pagan sex cult that gave rise to Scientology. The rambling occultist screeds of the Parsons-esque character are driven by a deep misogyny and provide a twisted justification for the abuse that happens in the research facility. Cooper struggles with the political implications of writing about these men: “I’ve either been really hard on the male narrators, or not hard enough, and I have no idea which it is. You can’t absolve yourself of responsibility for the politics of a story and how it may be read; but I feel like literature is the place to ask these questions about power.”

When all else fails, Cooper is tempted to move away from narrative altogether. The last story in the collection, “Vazova on Love,” is brief and sharp in its yearning, and barely structured. It is told by a spy who falls in love with her target, and reads like an echo of Anne Carson’s Short Talks. In a section titled “Autobiography,” the spy reveals herself: “Yes, I have walked into unlocked rooms and executed the men who waited for me there. I have soothed evil in its night terrors. I abase myself. I beg you. Lead pours from my mouth. My project is reconciliation.”

A few stories – “Slave Craton,” “The Roar,” “Thanatos” – don’t land quite as well as the rest; the sinuous drive of the other stories gets mired somewhat in confusing chronology, or a lack of tension. Overall, though, Cooper is a master of balancing reader disorientation with the heady thrill of the unknown. With each opening paragraph, she pitches us into a new atmosphere, full of gorgeous detail and emotional rawness, a world that feels too real to be a fantasy, or perhaps just fantastic enough to be real. mRb