A review of Fantastic Plotte! by Julie Doucet

While not exactly a household name, Montrealer Julie Doucet is one of the most celebrated and influential cartoonists to come out of the alternative comics scene of the 1980s and 1990s. As part of the circle of cartoonists who helped launch indie Montreal publisher Drawn & Quarterly – a group that included Seth, Chester Brown, and Joe Matt – and inspired by the personal and often confessional nature of the 1960s and 1970s underground comix movement associated with R. Crumb and Harvey Pekar, among others, Doucet’s work initially stood out by providing a rare female voice in a scene and medium that was dominated by male artists. Where cartoonists like Seth, Brown, and Matt produced work that depicted their relatively mundane lives in great and often painful detail, Doucet’s work is delightfully surrealist in its playful obsession with female sexuality, desire, and bodily fluids. 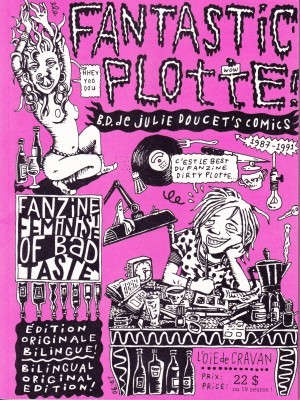 Fantastic Plotte, a new collection of Doucet’s earliest work from the late 1980s, reprints most of the stories from her fourteen self-published (photocopied and stapled, that is) mini-comics, or fanzines, notoriously titled Dirty Plotte (“plotte” being Quebecois slang for “cunt”) in their English or French original, and without corrections. At the end of the book is a section with translations of each piece. While most of the stories in Fantastic Plotte were previously available in the collection Lève ta jambe, mon poisson est mort, as well as in Drawn & Quarterly’s original run of Dirty Plotte (both of which are long out of print), it is nevertheless something of a revelation to see her work in its original chronology and bilingual splendour.

Although a playful use of the two languages has always been present in Doucet’s work, this bilingualism has been somewhat obscured by the fact that her work has, until now, only been published in unilingual translations. As Doucet explains in the introduction to Fantastic Plotte!, bilingualism was always an important aspect of her comics, and her first attempt at publication was for a comic strip competition in the anglophone weekly the Montreal Mirror. Using, as she says in the collection’s introduction, “whatever was left of my highschool english [sic] classes” to write and submit short parodic strips about Star Trek’s Kirk and Spock urinating on various planets in order to possess them, Doucet did not win the competition. However, her imagination seems to have been freed by writing in another language, and as her comics in their original versions switch fluidly between French slang and imperfect English, they underscore her particular position as a Montreal artist.

Another discovery from Doucet’s introduction is that she originally planned to name the series “By the Way” – a much tamer title, and one that is also less evocative of Doucet’s particularities as a comics artist. The genius of the Dirty Plotte mini-comics is precisely the confrontational, yet mischievously subversive, way they portray female unruliness and bodily messiness in stories about menstruating, nose picking, masturbating, leg shaving, and fucking on a bed of French fries. In their uncensored and anything-goes approach, the stories stem from Doucet’s punk-feminist Riot Grrrl imagination, and are drawn with her cluttered and collage-inspired “art brut” style that fills every frame with the assorted debris of bohemian life, such as bottles, ashtrays, dirty laundry, and – in a peculiar eccentricity of Doucet’s – anthropomorphic garbage. Doucet’s characters are often irreverently autobiographical, at least in visual likeness; they are sexually adventurous and assertive, embracing their own desires and excessive appetites for sex, alcohol, or – should the opportunity present itself – bloody murder followed by messy penectomy. A direct kick in the groin to both propriety and idealized versions of femininity, Doucet’s comics are both a politically astute critique of patriarchal attempts to regulate and restrict the female body, and a curiously innocent and celebratory collection of stories concerning sex and death and everything in between.

Doucet went on to publish twelve “official” issues of Dirty Plotte with Drawn & Quarterly, in addition to several collections, before retiring from comics in the late 1990s. In the years since, she has focused on screen-printing, collages, and illustration work, among other things, and has also published poetry and an autobiography that charts her youth up until age sixteen (written entirely with words cut out of old magazines, ransom-note style). Her work has continued to inspire new generations of cartoonists; her irreverent approach to form and subject matter can be seen in the works of contemporary female artists such as Kate Beaton and Lisa Hanawalt.

With Fantastic Plotte, her earliest and perhaps most wildly imaginative work is now back in print for the first time in years, and presented in a way that is as close to its original format as possible. The inclusion of each zine’s cover is especially eye-opening, since they are mini-masterpieces of grunge-era collage work mixed with almost dada-esque absurdity and random shout-outs like “hey you,” “read her sexy,” and “disco frog” yelling at the reader from wherever space permits. These covers anticipate Doucet’s later work with collage and magazine clippings, as well as her return to handmade zines and prints sold at venues such as Expozine, Montreal’s alternative press fair. It is perhaps ungrateful to complain about such a generous and revelatory collection, but considering the ambition and loving attention bestowed upon the book by L’Oie de Cravan, it is difficult not to wish that it had included not just the stories and covers, but all of the zines in facsimile. Similarly, it is puzzling that some of the best translated lines from the original Drawn & Quarterly run were updated to new versions, for example, turning “my brains are scrambled” into the significantly more prosaic “it’s total chaos in my head.” These minor quibbles aside, Fantastic Plotte is an essential collection for anyone interested in Doucet or 1980s alternative comics in general, and an important corrective to previous editions’ attempts to rope in her linguistic promiscuity.

Frederik Byrn Køhlert is a doctoral candidate at the University of Montreal who studies and writes about comics. He has written academically about Julie Doucet and is also the author of The Chicago Literary Experience: Writing the City, 1893-1953.