I Never Talk About It

In the beginning, secrets were solicited through Web ads and in public places around Québec City. These became a series of monologues performed in a park called Chaque automne j’ai envie de mourir. This project turned into a book of short stories of the same name by Véronique Côté and Steve Gagnon. The latest iteration, I Never Talk About It, is an experiment in translation that sets out to explore the marks translators leave on a text. The thirty-seven short stories from Côté and Gagnon’s collection are rendered into English by thirty-seven translators, a motley group that includes award-winning and first-time translators, a few people who usually write in French, and even a few who can barely speak it. Their identities and approaches are only revealed at the end of each piece, introduced by an adverb whimsically summing up how they translated – “gingerly,” “ambidextrously,” and so forth. 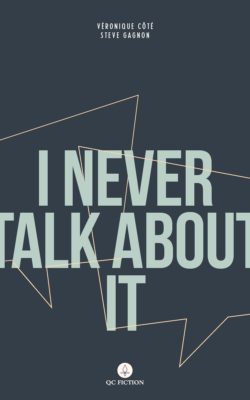 I Never Talk About It
Véronique Côté and Steve Gagnon

The inclusion of these comments is a gamble that could potentially detract from the emotional impact of each story. But in fact, these stories are strong. Taken on their own, they are moving and thought-provoking; the writing raw, direct, occasionally rambling. As short stories they might feel thin, but they are really unfiltered accounts of each narrator’s most profound preoccupation, and each is beautiful in its starkness. There are haunting stories with allusions to death: In “Ice,” a depressed woman imagines finding a body in a frozen river. The frenetic narrator of “Spasm” asserts he’s glad he can’t be quiet, “because being quiet is basically being dead.” There are requiems to the passage of time, such as the angst-ridden “Ants”: “Summer, love, home, ants; they’ve all got an end.” In “Couch,” the narrator recalls thinking, as a child, “I’m six years old. Soon, I’ll never be able to say that again.” She reports being unable to enjoy seaside holidays because they remind her that she has “betrayed the best part” of herself by living so far away from the ocean.

There is humour throughout, sometimes broad, as in “Snot,” where the narrator confesses a penchant for snot-eating, or wry and buried in the details, such as in “Ice,” whose narrator, valiantly fighting her depression, makes coffee every morning not to drink, just to smell. “Tsunami” brilliantly captures the feeling of falling in love where the dizzying power, the essential naïveté, is spiced with a modern acknowledgement of love’s ephemeral nature: “The point is that me and Simon Lepage made out and it was the beginning of time. Everything exploded, the water in his eyes, the room, the apartment, the city, all of Quebec … a huge wave burst out from inside our bodies and rushed out into the world and washed away everything … for the second time in my life, I’m in love. I love Simon Lepage and that’s an understatement.”

I Never Talk About It allows for more variety than the original French collection. The narrator’s gender is sometimes unclear, adding a dimension of ambiguity, whereas in French, a gendered adjective gives it away. There are different approaches to punctuation: some translators embrace the original stream-of- consciousness style, others rein in the run-on sentences to sound more English, and still others opt for compromise. Similarly, some stories retain all references to Quebec while others are recast in America or Britain. A few suffer from literal translations that reveal an unfamiliarity with Québécois idioms. On the other hand, one story, “Wrestling,” challenges accepted wisdom about what constitutes a good translation: this story sounds French; you can almost hear an accent. The words on the page are English, but it is as if the French hasn’t been washed out. This voice stayed with me. Surely that must be one criterion of a good translation. mRb

Anita Anand is the author of Swing in the House and Other Stories. Her translation of the novel Nirliit by Juliana Léveillé-Trudel will be out in 2018. She is currently working on a new book of fiction.