The 2012 student uprising lingers uneasily for many Quebecers. The streets were a vibrant main stage upon which all citizens were invited to play themselves, pots and pans in hand. The actions depicted in the media, however, were performed by a cast of formidable characters: scorned politicians, their armed senseless sentries, and fresh-faced student leaders. Add a panda, some rabbits, a banana, inviting weather, the thud of helicopters, and the sting of tear gas, and you’ve got the more memorable elements of a generation’s mobilizing event.

Many took to the streets for the first time, some created critically engaged art, and others, like myself, wrote or translated the news in an attempt to balance the anti-student bias in mainstream media. We felt that the historical context would yield a transformative rupture. Yet three years have passed and Quebec is still in the throes of neoliberalism. The collective ideals of society are being actively dismantled by a market-pan- dering state, for which profit always wins over the hearts and health of humans.

Two new books – In Defiance and Generation Rising – are useful in situating the 2012 strike within an ongoing struggle against society’s marketization at the expense of its citizens, and set against the backdrop of Quebec’s unique sociopolitical history. 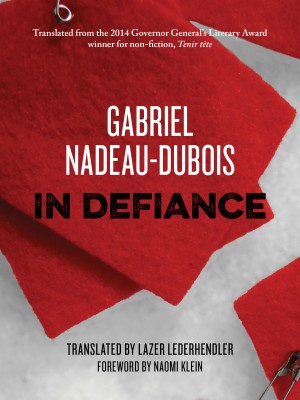 In Defiance is the cogent English translation by Lazer Lederhendler of Gabriel Nadeau-Dubois’s Governor General’s Literary Award–winning Tenir tête. The book reminds readers what the student strike was actually about: defiance of the Liberal Party’s explicit plan to “re-engineer the state,” including a proposed tuition hike, which lead to the emergence of “one of the largest sites of civic education ever created in Quebec.”

The author, who was one of the main student leaders of the movement, delivers an eloquent memoir of the challenges he faced from both supporters and antagonists without relying upon hyperbolic or proclamatory nostalgia, reserving his passion instead for social and environmental ideals. Nadeau-Dubois does a good job of separating his role of spokesperson and the events of the strike from his own beliefs without ever speaking for the whole of the movement, pointing out that “no one holds a monopoly on the truth of that moment.” The English text preserves the trademark potency of Nadeau-Dubois’s writing, which was one of the notable galvanizing elements of the movement. 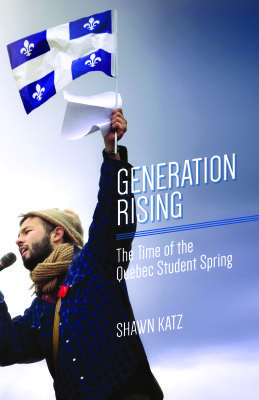 In Generation Rising, Shawn Katz integrates Nadeau-Dubois’s account into a panoramic history of student politics in Quebec since the Quiet Revolution. The book’s astonishing level of detail reflects the author’s thorough research and makes up for a dearth of writing in English about the topic. Like Nadeau-Dubois, Katz supplies a rich index, copious notes, and a solid list of references, including Badiou, Hessel, and Massumi. The historical account of student associations is frankly fascinating when set alongside the major changes in Quebec society over the past fifty years. Katz at times relays the action on the streets and in the corridors of power with histrionic zeal – but the extent of mainstream media’s compliance with the government’s agenda, and the latter’s conflation of governance with profit mongering, should rightfully arouse indignity! The author gets carried away and carries us with him.

Taking to the streets is an act of bridging untold solitudes. Not just the two our Francophone and Anglophone elders bound us to, but also the manifold pasts and presents of this place. Yet, in 2012 and still now, the streets and other public places we share are made dangerous not by their potential as political commons, but by the forces that seek to keep that potential at bay. Policing has increased alongside the mercenary abstraction of capitalism and its adjoining political structures.

In the face of these disempowering forces, which reveal the tenuous, even deceptive nature of our democracy, it is only natural that we might ask if there is not a better way to organize ourselves. Repeated efforts to defeat neoliberalism through voting reveal the limitations of this important democratic privilege, and we see thoughts turning towards supporting a collective goal rather than party lines. The spirit of 2012 was one of politicization, inviting us to distinguish between formal politics and the wider political sphere. For once, we all came out and acted politically – and it wasn’t only to cast a ballot.

Throughout their works, both Katz and Nadeau-Dubois call upon readers to locate instances of democratic and political possibility and engagement. The former student organizer appeals to us to be “constantly fostering debate on our campuses, in our workplaces, and in our neighbourhoods.”

If there’s anything that we’ve learned through the aftermath of 2012, it is that there’s still work to be done to make room for youth’s productive clamour, to name the possible within (or without) the existing political apparatus. mRb

Patricia Boushel is a cultural producer, activist translator, and prison meditator from Montreal. She also ponders questions of rights, justice and democracy through her work as a researcher and community organizer.